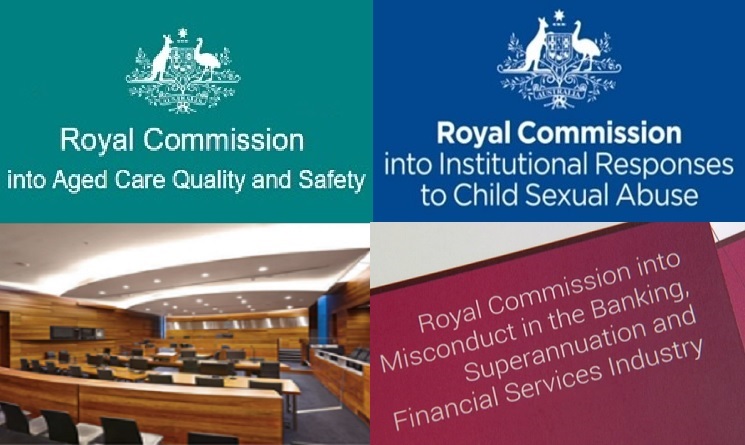 Australian Prime Minister Morrison’s call for a Royal Commission on matters related to the bushfires is puzzling. It is difficult to avoid the suspicion that it was a thought bubble exuding from the advisors of a Prime Minster under great pressure. For the government there would seem to be little upside.

Royal Commissions in Australia have considerable statutory powers of investigation. Under The Royal Commissions Act 1902 commissioners can summons persons to appear and give evidence under oath and to produce documents (Section 2) and failure to comply is punishable by imprisonment (Section 3). Refusal to testify under oath is an offence also punishable by imprisonment (Section 2). Because, in general their operations are transparent, hearings mostly open and their reports and the underlying collected evidence are made public, Royal Commissions are seen as independent and impartial.

It was not entirely clear from his interview with David Speers on the ABC’s Insiders program, or in a subsequent press conference, but it seems Morrison sees a Royal Commission focussing on the operational response to the bushfires, the constitutional issues around a new role for the Commonwealth in disaster response, and resilience and adaptation to climate change. Why the strong powers available to a Royal Commission are needed to address these issues the Prime Minister didn’t say.

While it is refreshing, at least on the surface, for the Coalition government to be planning on a deep and independent inquiry into aspects of climate change, it is to hoped that this is not just a cynical ploy to douse criticism or, to be even more cynical, to drag out the need for real policy responses under the cover of a Royal Commission. The Prime Minister’s statement that we need ‘to understand that the climate we are living in now and will live in for the next 10 years’, his repetition of notion of ‘balance’ in policy settings, and his constant refusal to countenance new emission targets or abandon the carryover credits belies the spin.

Morrison shows no comprehension of the scale or duration of the global warming crisis. Nor any genuine interest in undertaking the difficult transformational steps required. He will, he says ‘protect Australians from reckless targets, from reckless policies that can destroy their livelihoods and their incomes, and the future of their towns and of their regions that force up their electricity prices and then force up their costs of living’. That is, he won’t do anything meaningful. So why the Royal Commission unless it’s just a smokescreen, an excuse for avoiding real action, or putting off a confrontation with the luddites in the Party Room, until at least after the next election.

But there are risks for the Coalition government in a Royal Commission. While the terms of reference set out in the letters patent can to some extent constrain and divert the commissioners, these will be intently scrutinised by the public, experts, media, Opposition, and the States for signs of subterfuge. Unavoidably, given the national interest in the fires and global warming, it can be expected that the terms of reference will be reasonably open-ended.

Before a Royal Commission the State governments will be keen defend their preparations and responses to the fires. In particular they will be keen to see experts come forwarded who can explain the complexities of fuel reduction burning and justify State programs. This will take the wind out of the sails of some in government who seek to place some blame on the condition of the forests for the severity of the fires. It is to be anticipated that many climate experts will testify to the connection between the general condition of the forests and the extent to which this was predictable. It will be difficult for the federal government to avoid criticism for the lack of anticipatory and proactive policies given the wealth of information available.

But perhaps the greatest risk for the Coalition comes from the issues of resilience and adaptation. The Royal Commission would be dreadfully remiss if it didn’t ask in the face of what? There will be no shortage of scientists and activists willing and prepared to make submissions to the Commission and testify with respect to the science around global warming, the dire predictions that science is pointing to if drastic action is not taken, and the deep and transformational changes required to avoid catastrophic 3.0oC plus warming before the end of the century.

Maintaining the balanced approach to emissions and adaptation, the ‘have your consumer-lifestyle cake and eat it too’, that Morrison is spruiking as policy will become difficult to sustain. In his do- the-minimum plan, Morrison believes fixing water infrastructure and building dams will address drought. He sees resilience and adaptation as being concerned with natural disasters-fires, floods’ and cyclones- as well as native vegetation management, land clearing, and human settlement changes. And he is right. They are all important to human security as weather related disasters become more frequent and more intense.

But it reflects the blinkered view of a half convert to global warming. It sees the problem primarily as being about  climate. Not species extinction. Not food shortages and food insecurity. Not new diseases and new disease vectors. Not sea level rise. To suggest his view extends out over only ten years is to ignore the trends in global warming and the scientific evidence that once we pass 1.5oC sometime before 2040 the world is in uncharted territory. This will become apparent during a Royal Commission!

If this was a genuine attempt to get a body of evidence and a report on which the government could build a holistic strategy for addressing global warming, it should be applauded. The disputes over global warming policy in Australian politics need a game breaker, and soon. But if it’s a sham, it will come back and bite Morrison.