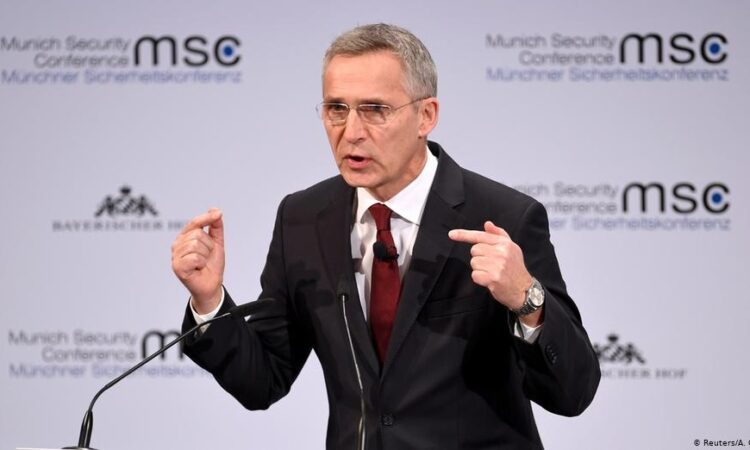 The Iran crisis has inspired three public utterances of relevance to Australia’s foreign and strategic policy; from, in chronological order, NATO Secretary General Stoltenberg, United States’ President Trump, and the Australian  Prime Minister. Collectively, they reveal the real depths of the crisis and a disturbing lack of strategic vision.

President Trump declared, ‘I am going to ask NATO to become much more involved in the Middle East process’. He must have been unaware of the North Atlantic Council meeting’s outcomes or he can’t grasp the basics of alliance policy, or both. Stoltenberg’s post-meeting comments revealed the Alliance’s European members’ awkward position.

Deflecting attention from the roiling tensions in the Alliance is Stoltenberg’s superpower. Asked directly ‘did the US show some evidence’ to justify the timing of the killing General Soleimani, Stoltenberg slid gracefully around the issue. ‘The US provided the rationale behind the action…we had several briefers from the United States, from the State and from Pentagon and they briefed and explained to other Allies why they took this action against General Soleimani’. Was there intelligence to back up the action? Who knows?

The Council members agreed on eliminating ISIS, training Iraqi forces, stopping Iran from getting nuclear weapons, and halting Iran’s activities in the region, but stopped well short of expressing solidarity with the US. ‘This is a US decision’, Stoltenberg said, ‘It is not a decision taken by either the Global Coalition nor NATO’. Nor was it one the Europeans could support.

Hugh White recently observed, ‘Real alliances—the ones that impose real costs and risks, which are the only ones that matter—only work when there’s a clear alignment of strategic objectives. That’s because countries only commit themselves to alliances, and accept those costs and risks, to serve their own objectives, not their allies’.

Increasingly the strategic interests of the Europeans and the Americans have diverged and the balance between costs and risks for America’s NATO partners is shifting.

Added to the disagreement between the US and its trans-Atlantic partners over Iran, the Joint Comprehensive Plan of Action(JCPOA) and the killing of Soleimani, is the US’s withdrawal from the Paris climate accord and from the Intermediate-range Nuclear Forces Treaty. Also, Germany is incensed at the sanctioning of the important Nordstream2 project; seen as an attack on its sovereignty and energy security. The connivance of the US in Turkey’s move into Eastern Syria without consultation is another irritant.

America’s Russian policy has been confused and contradictory. Against the European consensus the US has urged the re-entry of Russia into the G8 and has been prepared seemingly to jeopardise Ukraine’s capacity to resist Russian supported insurgents. Solidarity in the face of Russian aggression on Europe’s borders, and a common front to deter further disruptive incursions in the Baltics, Balkans and Transcaucasia, is a security priority for Europe but falls well down the US list of strategic issues.

Crucially, it should not be overlooked that Trump also signalled the dramatic demotion in relative importance to the US of the security of the Middle East. He said, ‘We are independent, and we do not need Middle East oil’. The Europeans could take this as a veiled threat; the implication being that the Europeans’ interests in the Middle East are greater than those of America and they would have the most to lose if the US forces pulled out.

The Europeans are not about to voluntarily abandon the Alliance. US military power is still the best guarantee of European security, if it can be counted on. Unless Trump precipitously withdraws the US from NATO, as a grand, or desperate, political gesture in an election year, the alliance most likely will struggle on as NATO still serves as a venue for exchange of views and problem solving. Yet, it would be surprising if wise heads in the European capitals are not asking what are the genuine security risks, what are their important interests, and when do the costs of NATO outweigh the benefits.

With his usual eloquence Morrison added to the discussion, ‘This is the mission that we have been part of, as part of a broad coalition, and that remains our mission and we remain tasked to that mission as our people there in the Middle East are pursuing’. By mission he means ‘a united and stable Iraq’ and ‘countering Daesh and its support network’. And while the PM welcomed President Trump’s statement at his press conference, he shed no light on what it meant for Australia, and there was little of genuine policy substance or sign of a sophisticated appreciation of the geopolitical shifts taking place.

Morrison didn’t address the prospect of Iraq’s demand that all foreign forces leave its territory. So it is not clear what Australia’s policy is. It seems the implications of Trump trying to pressure the Europeans into some greater, though unspecified role in the Middle East, and the shift in the US reliance on Middle East oil and the consequences that could have for Australia’s deployment in the long term, has not been under consideration. Is Australia’s presence in the Middle East wholly dependent on the US being there or does Australia have its own national interests in the region, such as our dependence on oil from the Middle East?

Hanging over all of this is the massive policy failure of the US withdrawal from the JCPOA. Theatrically, Trump began his rambling and error-filled address with the statement ‘As long as I am President of the United States, Iran will never be allowed to have a nuclear weapon’. But there was no evidence of a plan beyond the so far failed sanctions regime.

If Trump is re-elected, or even if in the next twelve-months the Iranians make significant progress towards a nuclear weapon, what will the US do? Bomb Iran? This is the most concerning of a raft of strategic policy issues revealed in the three pronouncements.