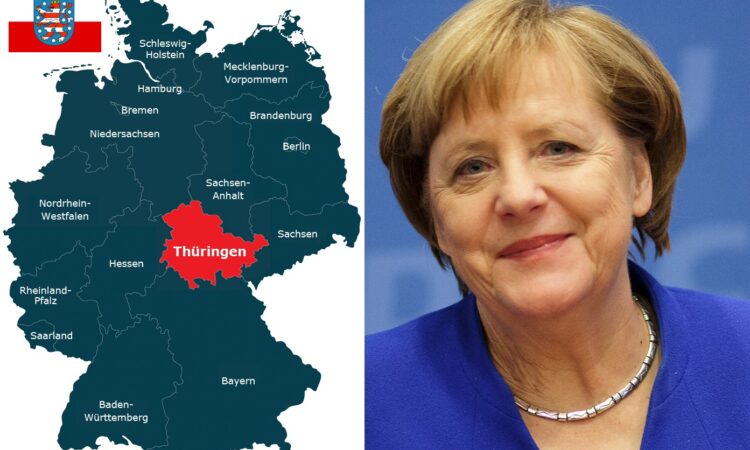 The political tumult in Thuringia is bound to have consequences beyond Germany’s domestic politics. The generation shaped by the complex social, political and economic legacy of the Nazi past, a divided Germany, post-Soviet national reunification and the emergence of the European Union is passing.

In the context of recent European politics, Angela Merkel might seem to have overreacted. The ruckus has claimed Merkel’s anointed successor Annegret Kramp-Karrenbauer. However, Thuringia is a tipping point.

A strong party taboo was broken when Angela Merkel’s Christian Democratic Party (CDU) joined with the centrist Free Democrat Party (FDP) leader in Thuringia, Thomas Kemmerich, to form a government with the support of the right wing Alternative for Germany (AfD). Merkel was outraged, declaring the move by the CDU was ‘unforgiveable’ and that the local party ‘broke a basic conviction for the CDU, and also for me, that no majorities should be won with the help of the AfD’ [italics added].

To understand the strength of her personal response requires a little history.

Born in 1958 in the German Democratic Republic, Merkel grew up with the Soviet era antifascism rhetoric but also with the oppression and restrictions of the communist dictatorship. Becoming political only after reunification, her career has been marked by her advocacy of democracy and human rights, opposition to xenophobia, discrimination, and racism, and deep caution about the potential for illiberal or fascist forces to arise again.

In a 2008 speech before the Israeli Knesset Merkel made her views clear. The holocaust she said, ‘fills us Germans with shame’ and, ‘[I]t left wounds that have not healed to this day’. Recalling her origins, she observed, ‘I spent the first 35 years of my life in the German Democratic Republic, a part of Germany where National Socialism was considered a West German problem’ and that ‘[I]t took more than 40 years before Germany as a whole acknowledged and embraced both its historical responsibility and the State of Israel’.

Importantly, she said ‘Anti-Semitism, racism and xenophobia must never be allowed to gain a foothold in Germany or Europe again’. Commemorative acts are ‘not enough once memories become part of the past’ and memories ‘must constantly be recalled’. She worried about a time ‘when all those who experienced it first-hand have passed away’.  Elsewhere she emphasised that Germany because of its past must be ‘that much more vigilant than others’.

It was her genuine commitment to the need to act positively on the values antithetical to the darker German past that was behind her 2015 decision to admit a million refugees.

That, of course, over simplifies the career of an astute politician, but her response to the Thuringia events both give an indication of the strength of her opposition to right wing politics and a clue to her success in post-Cold War Germany. Based on their or their parents’ experiences, many in her generation hold similar concerns about the possible re-emergence of reactionary forces. However, a new generation has grown up following reunification for which the memories of the Second World War are less emotive and more distant.

German public broadcaster Deutsche Welle observed ‘Right-wing populist involvement in the highest levels of government is becoming fairly commonplace in Europe, but Germany’s political “cordon sanitaire” around the populist Alternative for Germany (AfD) had seemed far more robust than most, and with good historical reasons’. Kemmerich’s election was the first time a government had been installed with the aid of a far right party since World War Two, and that Thuringia was where the Nazis first entered government in the 1930s has amplified the symbolism.

Founded in 2013, and sparked in part by the German bailout of other EU countries after 2008, the AfD has risen rapidly to become the third largest party at the national level and is represented in all the state legislatures. Since its launch, AfD has gone through a split and morphed from a Eurosceptic party into an anti-elitist, anti-immigration, and anti-Muslim party. The AfD gains disproportionate support in regions with problematic economic conditions such as East Germany and its supporters ‘do not feel represented by the great coalition of established parties led by chancellor Angela Merkel’.  What makes the AfD standout is not its political program which is common to other right wing European parties. It is the German context.

Despite Trump’s erroneous assertion that the EU was set up to ‘to take advantage of the United States’, a central objective of the EU’s precursors in the European Coal and Steel Community and the European Defence Community ‘was to alleviate French concerns that post-war Germany would employ its regained industrial strength as a threat to French autonomy, both in economic and security terms’.

Much has happened since then and the EU stands for far more today. Yet, European integration has avoided conflict between Germany and France and the process begun post-war has been a success. While Germany once again has the largest economy in Europe, there is no fear that it harbours the military ambitions that led to the two world wars. A continued surge in support for the AfD after Merkel retires in 2021, and a further decline in CDU and Social Democrat Party electoral fortunes, heralds a shift in the character of the EU. Germany has been a stalwart of the European Union and an anchor point for its values, norms, and ideals. Merkel has been the informal leader of the EU and a bulwark against the growing illiberal and authoritarian forces that now trouble Europe’s unity. As the EU struggles to find its place in the multipolar world order and to maintain its liberal democratic purpose, domestic German politics after Merkel will have a significant impact on nature of the EU with geopolitical ramifications.