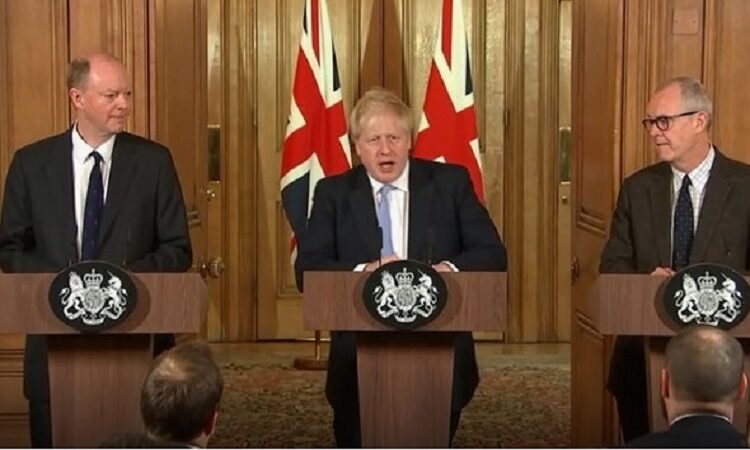 Seeping faintly through the pronouncements and policies of some government responses to the coronavirus pandemic are the vapours of older belief systems; a whiff of utilitarianism, the scent of social Darwinism, and the fetid reek of eugenics.

Not that democratic leaders consciously adhere to or champion these ideologies. But these notions always seem to be lurking in the peripheral shadowlands of the policymaker’s mind.

This raises the possibility of other purposes being behind the current policies on COVID-19. That’s not to say Sir Patrick Vallance is a darkly scheming Machiavellian. But did the policy of ‘herd immunity’ that he suggested find a receptive audience in Johnson’s cabinet because of its appeal to existing psychological or ideological predilections in Downing Street?

Prominent and influential early-twentieth-century eugenicist Paul Popenoe made explicit the connection between eugenics and social Darwinism and utilitarianism. In his book Applied Eugenics (1918) Popenoe observed that ‘[T]o those who accept that philosophy, made prominent by Jeremy Bentham, John Stuart Mill, Herbert Spencer, and a host of other great thinkers, eugenics rightly understood must seem a prime necessity of society’.

Utilitarianism in politics as in moral philosophy has found many powerful critics. Alasdair Macintyre described it as ‘a pseudo-concept available for a variety of ideological uses, but no more than that’. Therefore, he warned ‘when we encounter its use in practical life, it is always necessary to ask what actual project or purpose is being concealed by its use’. G.E.M. Anscombe, referring to someone justifying the killing of an innocent for the greater good by the reasoning of consequentialism, utilitarianism’s offspring, simply said ‘I do not want to argue with him; he shows a corrupt mind’.

Is it a bit farfetched to connect contemporary politics with these ostensibly outdated ideas? Take the utilitarian argument. At first blush the UK government’s policy of allowing the virus to pass through the entire population so that the population acquires ‘herd immunity’ has a sort of brutal logic to it. The community will be protected next winter if the virus returns, and the lower cost burden incurred relative to containing or limiting its spread will free up health care system resources to treat those most at risk.

However, as William Hanage has explained, the herd immunity approach seems at odds with the stated purpose of relieving the burden on the healthcare system and protecting the vulnerable. For it to be a success it has been calculated that ‘about 70% of the UK population would need to be immune to COVID-19’ at the end of this outbreak; more than 47 million citizens must become infected. At an optimistic minimum, 236,000 deaths might result, and potentially this approach ‘could result in the deaths of more than a million people with a further eight million severe infections requiring critical care’. Producing the greatest benefit for the greatest number is the utilitarian calculus.

What about social Darwinism and eugenics? They are sides of the same coin. Social Darwinism is an idea that fits effortlessly into the notions of nationalism and unilateralism that regard international competition—whether in trade or over political systems—as survival-of-the-fittest struggle. There was more than a hint of this in the Brexit rhetoric. Superior physical and mental traits confer an advantage on their possessors and these advantages can spread through the population through inheritance; which justifies weeding out the weaker citizens.

This logic is present in the UK’s post-Brexit immigration reforms where top priority will be accorded to ‘those with the highest skills and the greatest talents: scientists, engineers, academics and other highly-skilled workers’ while no path will be open to the ‘general low-skilled’. It is also not far from the idea of exposing the general population to a virus that will take out those with co-morbidity issues, less robust immune systems and who find healthcare unaffordable.

As western born political philosophies, utilitarianism, social Darwinism and eugenics provide a basis for reasoning that a government is acting in the greater good when it allows or permits, through inaction or positive policy, changes in the make-up and quality of the population to make them better suited to compete and survive in difficult circumstances. There is no concrete evidence that this reasoning is currently behind the actions of any democratic leaders during this crisis. Random actions are not proof of a coherent plan.

However, it is disturbing that advisers aligned with the above philosophical outlooks have some access to the inner circles of some western governments. Boris Johnson’s close aide Dominic Cummings employed Andrew Sabisky as a Downing Street adviser. It seems improbable that Cummings was unaware of Sabisky’s fascination with eugenics seeing as they were published on a blog for which Cummings was responsible. In the White House, Stephen Miller, who shares a similar outlook, occupies a position of considerable influence.

The capacity of governments to respond appropriately to crises has never been more important. The COVID-19 pandemic is serious, but of far lesser significance for the world than the inevitable and mounting crises at the intersections of global warming, population growth, wealth inequality, resource depletion, biodiversity collapse and global instability.

The pandemic has been magnified by the inability of governments to learn from past pandemics and put in place long term preparations. It has been mishandled through a lack of international cooperation and a sluggish response from an overcautious political class. Messages critical to saving lives and limiting economic damage from leaders have been and continue to be mixed, inaccurate and sometimes ignorant. How will they respond to greater crises? Where will they find their moral moorings?

At a minimum, people should be worried if governments act on the basis of utilitarian principles when the lives of individual citizens are in peril. They should worry if governments are consistently cavalier or imprudent in planning for foreseeable crises. And they should be concerned about what they have seen from governments in the past three months.