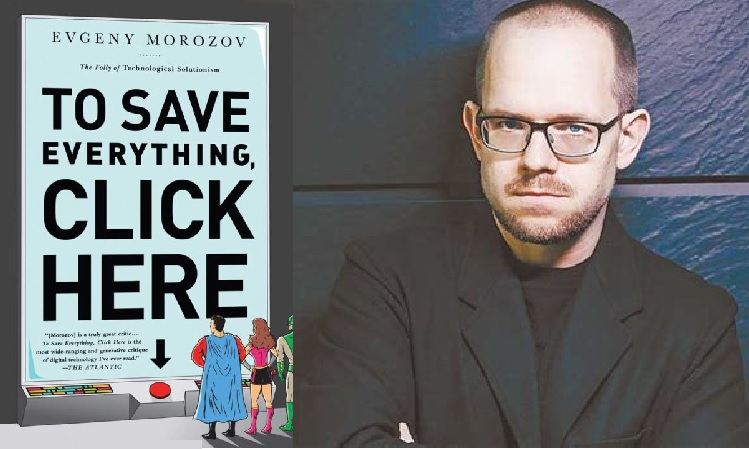 Published in The Guardian on 15 April 2020, Evgeny Morozov writes about the relationship of capitalism, neoliberalism and technology’s ‘solutionism‘ in the context of the COVID-19 pandemic.

Morozov’s books examine the ways in which technology might be diminishing rather than enhancing democratic life. His first book, The Net Delusion, argued that the internet may actually make it harder, not easier, to promote democracy. His second book, To Save Everything, Click Here, is a critique of what Morozov calls “solutionism” – the idea that all problems can be solved by technological solutions – with the right code, algorithms and robots, technology can make life “frictionless” and trouble-free. Morozov’s concern is that this approach shuts down other avenues of progress and leads ultimately to an algorithm-driven world where technology companies, rather than elected governments, determine the shape of the future.

In government responses to the COVID-19 pandemic, Morozov sees a ‘feast of solutionism’ being unleashed. [W]e can see two distinct strands of solutionism in government responses to the pandemic. “Progressive solutionists” propose that timely, app-based exposure to the right information could “nudge” people to behave in the public interest, while “punitive solutionists”, by contrast, want to use surveillance infrastructure to monitor and manage daily activities. The risk, he argues, is that the pandemic will supercharge the solutionist state, … creating an excuse to fill the political vacuum with anti-democratic practices.

Morozov sees that, “after decades of neoliberal policy, solutionism has become the default response to so many political problems”, and there is now an intimate relationship between neoliberalism and solutionism. Solutionism “has transcended its origins in Silicon Valley and now shapes the thinking of our ruling elites”. The contention is that digital technology – and specifically, big data and artificial intelligence – has been hijacked, and has become a tool that perpetuates the survival of modern capitalism by applying ‘digital plasters’ to its inherent problems.

“Our first order of business”, he writes, “should be to chart a post-solutionist path – one that gives the public sovereignty over digital platforms. Otherwise, complaining about China’s authoritarian but effective response to Covid-19 is not only pathetic but also hypocritical: there are many varieties of techno-authoritarianism in our future, and the neoliberal version doesn’t look much more appealing than the alternative.”

Our first order of business should be to chart a post-solutionist path – one that gives the public sovereignty over digital platforms. Otherwise, complaining about China’s authoritarian but effective response to Covid-19 is not only pathetic but also hypocritical.

Morozov argues that unless we reclaim “digital platforms for a more vibrant democratic life, we will be condemned for decades to come to the unhappy choice between “progressive” and “punitive” solutionisms.” And our democracy will suffer as a result, he suggests, pointing to the way in which the “feast of solutionism unleashed by Covid-19 reveals the extreme dependence of the actually existing democracies on the undemocratic exercise of private power by technology platforms”.

The worst is still to come, he concludes: the pandemic will supercharge the solutionist state, as 9/11 did for the surveillance state, creating an excuse to fill the political vacuum with anti-democratic practices, this time in the name of innovation rather than just security.

Read the full article here (external link to The Guardian)