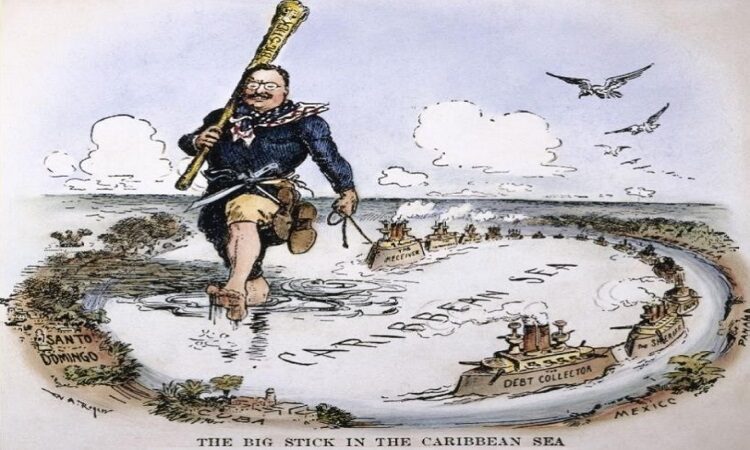 Between 1890 and 1920 the democratic US became a great power. Its trajectory from western hemisphere state to global power has some economic, military and foreign policy parallels with authoritarian China’s growth in the twenty-first century.

The US’s trajectory from western hemisphere state to global power has some economic, military and foreign policy parallels with authoritarian China’s growth in the twenty-first century.

There are a number of superficial similarities. Both China and the US underwent domestic and external transformations. Both experienced a brutal civil war before their ascendancy. Brutal though it was, the American civil war was not of greater scale than the Chinese civil war, extending from the 1911 fall of the Qing Dynasty to the Chinese Communist Party’s victory in 1949.

China’s treatment of Uighurs and Tibetans is rightly criticised, but there were deeply repugnant aspects to America’s domestic policies during its rise. An epileptic black man born in the early decades of the twentieth-century, would have been disenfranchised and segregated, and legally barred from consorting with or marrying a white woman. Along with disabled white people, he would have been liable to incarceration in an asylum for the unfit, and possibly forcibly sterilised. He would always have been in danger of being lynched.

The fear of ‘race suicide’ permeated Congressional debates and popular monographs, and shaped national policies. National leaders lamented the higher birth rates among immigrants and minorities, seen as a threat to the Anglo-Saxons who sat atop a racial hierarchy. Only the fit, productive white Anglo-Saxon males had real access to the liberties, protections and rights contained in the US Constitution.

America’s foreign policies were transformed between 1890 and 1920. The US’s debut in global affairs was broadcast through its victory in the brief Spanish-American War of 1898. The US became a colonial power in the process (putting aside the forceful annexation of Mexican territory in the 1840s), acquiring Spain’s Caribbean and Pacific holdings. Spain ceded Puerto Rico, Guam and the Philippines, and Cuba became a protectorate of the US. In the Philippines the American forces brutally suppressed a nascent Filipino independence movement.

The US found itself, not unlike China today, facing a fading hegemon in Great Britain and emerging strategic competitors in Japan and Germany. Just as China now pursues military parity with the US, back then the US saw that the possession of strong navies was a key to great power status. As President, Theodore Roosevelt dispatched the Great White Fleet, a large force of American battleships, to circumnavigate the globe in 1907. A gesture designed to demonstrate the US’s growing might and to intimidate competitors, especially the Japanese.

In Central America and the Caribbean during this time, US strategy can be compared to China’s ‘nine-dash line’ claims in the South China Sea, and its strategic seizure and fortification of atolls. In fact, the Monroe Doctrine was far more assertive of America’s self-determined rights than China’s nine-dash line. The defensive and isolationist interpretation of the Monroe Doctrine had given way by the late-nineteenth century to a more aggressive understanding. It provided cover for the US to occupy Panama, Nicaragua, Haiti, and the Dominican Republic and declare them protectorates.

The Panama Canal and the Belt and Road initiative have some symmetry; each a massive investment in infrastructure for economic and strategic interests. China has been accused of de facto undermining the sovereignty of involved nations through direct investment, debt and influence operations. However, the US actually fostered the secession of Panama from Columbia, breaching its sovereignty, in order to secure the construction and control of the canal it deemed vital to its national interests. Not unlike China’s strategic positioning in the South China Sea, US domination of the arc of Caribbean Islands was seen as essential to securing the approaches to the strategic Panama Canal.

Positioning the adversarial relationship with China as one of morally superior western democratic nations in competition with a somehow illegitimate and malevolent China is an exercise in historical amnesia… Neither authoritarian nor democratic forms of government are a prophylactic against injustice, racism or militarism.

This is not to excuse China for its activities. But to show that they are unexceptional compared to those undertaken by other great powers.  Positioning the adversarial relationship with China as one of morally superior western democratic nations in competition with a somehow illegitimate and malevolent China is an exercise in historical amnesia. Open any book on the history of the European colonial powers on any of the continents and China’s transgressions won’t seem quite so heinous in comparison.

Neither authoritarian nor democratic forms of government are a prophylactic against injustice, racism or militarism. Illiberalism isn’t the product of a political system; it is an innate human tendency that needs to be guarded against. That’s not an argument for moral equivalency in political systems. The vital element in the prevention against illiberalism lies in the adherence, by those who inhabit and operate the key institutions, to the key principles of justice, fairness, and equality.

The strength of a healthy democracy lies in good part in the potential of the unique institutions it fosters: freedom of expression, freedom of belief, freedom of movement and association, along with a fair and accessible justice system. But only in part. It also depends on the vigilance and self-reflection of national leaders in politics, business and civil society to recognise backsliding and take redemptive action.

A series of recent studies show that democracies today inhabit glass houses: for example, Nations in transit 2020: Dropping the democratic facade, Global Satisfaction with Democracy 2020 and Global State of Democracy 2019. Confidence in democracy is in decline in the democratic states.

Democracies are an attractive alternative to authoritarianism when, and only when, they live up to their promise. China should not be immune to criticism, but the same prudence, caution and risk management should be applied when dealing with China as when dealing with any other self-interested great power. And wise leaders should try to avoid historical amnesia when pursuing their international relations.