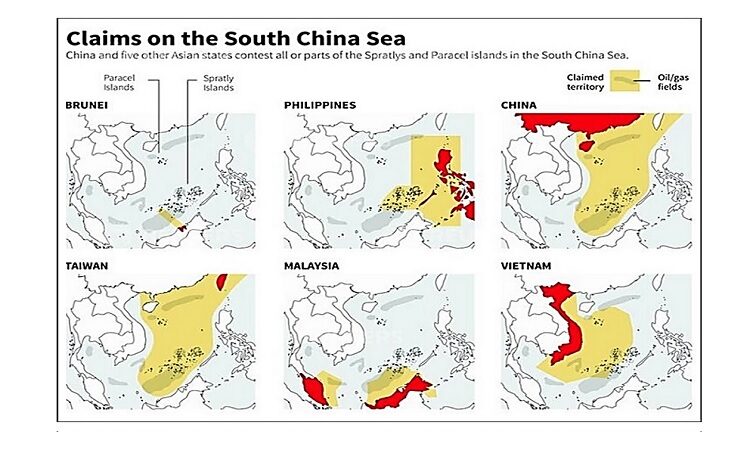 Despite Australia and the United States having no direct interest in continental shelf claims in the South China Sea, both have recently joined the debate. Both appear to have sought maximum publicity for their submissions – which have been reported as providing the basis for confronting and false media headlines, such as ‘Australia says China’s claims to disputed islands are ‘invalid’ and are not consistent with UN convention on law of the sea’. In fact there is nothing new in the Australian or US statements despite suggestions that they reflect new aggressive stances against China, and it is not clear why Australia and the United States made statements at this particular point in time other than to add another dimension to the intensifying rivalry with China.

On 23 July [2020], Australia lodged a note verbale to the UN Secretary-General setting out its position on China’s claims in the South China Sea. This was part of a series of notes verbales from countries bordering the South China Sea that was triggered by a December 2019 Malaysian submission to the UN Commission on the Limits of the Continental Shelf (CLCS) claiming a partial outer continental shelf in the South China Sea. The Malaysian note echoes a 2009 joint claim by Vietnam and Malaysia to an outer continental shelf that was also met at the time with a round of protests from other bordering countries.

Recent notes verbales from China, the Philippines and Vietnam to the CLCS all protested Malaysia’s claims while one from Indonesia rejected China’s claims to historic rights over the living and non-living resources of the South China Sea. China in turn responded with its own notes verbales to the CLCS defending its position. Despite Australia and the United States having no direct interest in continental shelf claims in the South China Sea, China’s submissions to the CLCS provided grounds for first the United States and later Australia to join the debate. Still, both made submissions to the UN Secretary-General rather than to the CLCS.

As the United States is not a party to the 1982 UN Convention on the Law of the Sea (UNCLOS), it was restricted in its ability to make submissions to the CLCS, a body established under UNCLOS. In an initial submission on 2 June, Washington spelt out its rejection of China’s claim to historic rights in the South China Sea and its attempt to enclose island groups inside straight baselines.

Washington updated its position in a speech and associated press release on 13 July [2020] from US Secretary of State Mike Pompeo that emphasised Washington’s support for its ‘Southeast Asian allies and partners’ in protecting their sovereign rights to offshore resources under international law. This in turn sparked excited, and often hyperbolic, coverage in the press and social media. But there is little indication that Washington’s Southeast Asian allies and partners welcome such interventions by the United States. Most see greater risk in any development that might intensify US–China rivalry.

Australia’s note contains similar language to past US statements but does not explicitly support the rights of Southeast Asian countries. Perhaps this is because these rights are not necessarily well-based on UNCLOS and Canberra appreciates the ambivalent attitudes in the region towards outside intervention.

Ironically, there is nothing new in the Australian or US statements despite suggestions that they reflect new aggressive stances against China. Washington simply restated its well-known position on China’s claims as set out, for example, in the 2014 US Department of State publication Limits in the Seas No. 143 – China: Maritime Claims in the South China Sea.

It is not clear why Australia and the United States made statements at this particular point in time other than to add another dimension to the intensifying rivalry with China. There was also nothing new in China’s statements to the CLCS. China has made similar arguments in the past in almost identical language without any direct Australian or US rebuttal.

Both Washington and Canberra appear to have sought maximum publicity for their submissions. They have provided the basis for confronting and false media headlines, such as ‘Australia says China’s claims to disputed islands are ‘invalid’ and are not consistent with UN convention on law of the sea’. Australia’s note said nothing like this.

Australia’s note only acknowledged that China’s claims over the Paracel and Spratly islands were not ‘widely recognised by the international community’. That’s true but there is ample legal opinion to suggest that these claims are at least as good as those by any other country. For example, in a 1999 paper, the late Professor Christopher Joyner found no strong legal support for any of the claims. He noted that China’s case was ‘well documented’ and the Vietnamese case had major weaknesses, as did the Philippine and Malaysian claims.

Australia’s note is nothing more than a concise summary of its position on China’s claims in the South China Sea. Most of these Chinese claims are inconsistent with international law, notably those associated with the nine-dash line and claimed historic rights. But China’s claims to islands in the sea are not invalid or inconsistent with international law.

Nothing in the note verbale suggests that Australia sees China’s claims to islands as any weaker than those by other claimants. The 2016 Permanent Court of Arbitration Tribunal on the South China Sea also lacked jurisdiction to adjudicate claims concerning sovereignty between China and other states.

Australia’s recent intervention led to calls for it to join the United States in undertaking freedom of navigation patrols in the South China Sea. There are many reasons why Australia should not. The only freedoms of navigation under threat in the South China Sea are ones associated with rights claimed by the United States to conduct certain military activities in the maritime zones of other countries.

Sam Bateman is a Professorial Research Fellow at the Australian National Centre for Ocean Resources and Security (ANCORS), The University of Wollongong. This article was originally published here on 12 August 2020 at East Asia Forum.