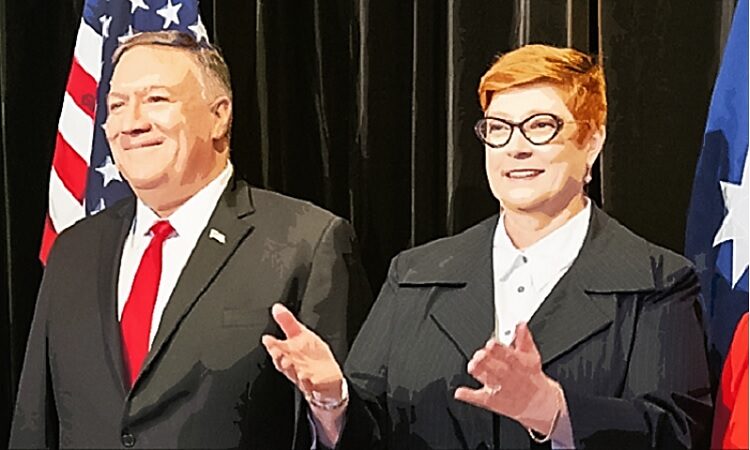 In international affairs, words are bullets, according to an old diplomatic saying. If so, Australia in recent years has begun firing new ammunition.

In his address to the Aspen Security Forum today, Prime Minister Scott Morrison stressed the importance of Australia’s alliances with fellow liberal democracies, the Five Eyes partnership, our “ever‑closer” ties with Europe and our

belief in the values and institutions that the United States has championed.

In a similar address to the Lowy Institute a year ago, Morrison also praised India and Japan as countries with “shared values” to Australia.

And in the press conference at last week’s AUSMIN talks between the Australian and US foreign and defence ministers, there were 15 references to “democratic values” (on the American side), “shared values” (the preferred Australian formulation) and related phrases (“fundamental values”, “value sets”).

“Values”, a word seldom used in the past, has now assumed a central place in our foreign policy rhetoric. Speeches, press conferences and policy statements vibrate with the V-word.

A counterpoint to China’s value system

The reason for the return of values to our diplomatic rhetoric is no mystery. China’s emergence as the largest and most powerful autocracy in history, with an economic weight to match, has forced Australia to balance its mercantile and security interests.

Over the past decade, Australia allowed itself to become economically dependent on China, which takes a third of all our exports and over 80% of key commodities like iron ore.

China’s own governance model is based on a different set of values, which prioritise allegiance to the state and party and involve restrictions antithetical to open societies. These include limits on freedom of speech, association, religion and anything else that could enable collective action in opposition to the state.

As it has championed this model around the world, Beijing has increasingly targeted democracies like Australia with local influence operations, political interference and, most recently, its crude “wolf-warrior diplomacy”.

Australia’s new embrace of the term “values” has also been accompanied by much more hawkish words on China.

While Australia has declined to join the US in more aggressive freedom of navigation campaigns in the South China Sea, the AUSMIN joint statement criticised China’s behaviour in the disputed waters, as well as in Hong Kong and Xinjiang. Also consistent with democratic values, it backed Taiwan’s membership or observer status in international bodies.

Until recently, Australian leaders ignored or downplayed the role of values in our foreign policy, preferring to focus on economic issues and engagement with Asia.

Talk of “democratic values” risked push-back from other nations in the region. Former Malaysia Prime Minister Mohamed Mahathir and Singapore’s long-time leader, Lee Kuan Yew, for example, were advocates for the idea of “Asian values”, which was more culturally specific to their countries.

They argued that individual freedom was a Western ideal, not compatible with Asian societies.

Successive Australian governments, keen to engage more with the region but still wary of being too close to Asia, largely accepted this.

The Howard government, in particular, was often at pains to frame Australia as a European society that approached Asia as an outsider, as academic John Fitzgerald put it:

Australia had one set of values, Asians another, and all parties should respect the values associated with the other’s ethno-cultural traditions by remaining silent on values altogether.

How our diplomatic language has evolved

The shift in our diplomatic language began a decade ago with the idea of a “rules-based order”. This term (like values) had hardly been used in official policy before, up to and including the Howard government.

It began to gather a lexical head of steam under the Rudd and Gillard governments, and reached its pinnacle in the 2016 Defence White Paper, in which “rules-based global order” appeared no less than 48 times and was identified as one of Australia’s core strategic interests.

The ascent of “values” has followed a similar trajectory. It was mentioned seven times in the 2016 Defence White Paper, including specific references to “shared democratic values” with the US, India, Japan and New Zealand.

“Values” then went mainstream in the 2017 Foreign Policy White Paper, with no less than 31 references, including a whole section devoted to “Australia’s values”.

Democracy and multiculturalism were identified as our two core values, staking big claims for Australian exceptionalism:

We are one of the oldest democracies and the most successful multicultural society in the world.

Talk of values must be met with action

This language provides an obvious connection with the US. And the contrast with China could not be more stark.

With China’s rise under President Xi Jinping, different value systems now underpin different visions of security. By pushing democratic societies to confront this reality, Xi has done us a favour.

Australia has reaffirmed its core belief in a rules-based international order linked to democratic values and strengthened its partnership with other like-minded nations, such as India, Japan and the US.

However, the language of values also presents challenges to other aspects of our foreign policy.

It is difficult to square the focus on values with our treatment of asylum seekers, selective application of international law and ongoing engagement with autocratic regimes in Asia. (A good example of all three is the now-lapsed refugee resettlement deal with Cambodia’s brutal Hun Sen regime, signed with a champagne toast, which Morrison presided over when he was immigration minister.)

If values are now the coin of our foreign policy realm, we will have to start walking the talk.

This article was published on 5 August 2020 in The Conversation. It is republished under a Creative Commons license.

Professor Benjamin Reilly is a political scientist and academic at the University of Western Australia’s School of Social Sciences whose work focuses on democratisation and electoral reform in ethnically divided societies.