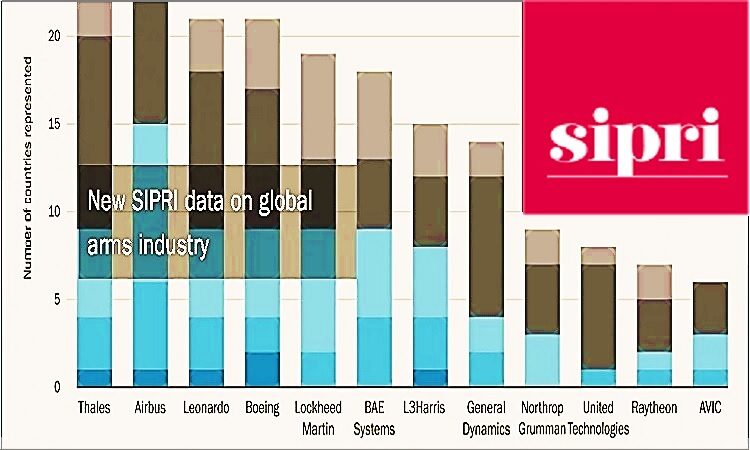 New data from SIPRI’s Arms Industry Database shows that arms sales by the world’s 25 largest arms-producing and military services companies (arms companies) totalled US$361 billion in 2019. This represents an 8.5 per cent increase in real terms over the arms sales of the top 25 arms companies in 2018.

Nineteen of the top 25 arms companies increased their arms sales in 2019 compared with 2018. The largest absolute increase in arms revenue was registered by Lockheed Martin: $5.1 billion, equivalent to 11 per cent in real terms.

In 2019 the top five arms companies were all based in the United States: Lockheed Martin, Boeing, Northrop Grumman, Raytheon and General Dynamics. These five together registered $166 billion in annual arms sales. In total, 12 US companies appear in the top 25 for 2019, accounting for 61 per cent of the combined arms sales of the top 25.

The six West European companies together accounted for 18 per cent of 2019 arms sales by the top 25 arms companies. The largest percentage increase in annual arms sales—105 per cent—was reported by French producer Dassault Aviation Group.

The SIPRI report also looks at the international presence of the 15 largest arms companies in 2019. These companies are present in a total of 49 countries, through majority-owned subsidiaries, joint ventures and research facilities.

With a global presence spanning 24 countries each, Thales and Airbus are the two most internationalized companies—followed closely by Boeing (21 countries), Leonardo (21 countries) and Lockheed Martin (19 countries).

The United Kingdom, Australia, the USA, Canada and Germany host the largest numbers of these foreign entities. Outside the arms industry hubs of North America and Western Europe, the largest numbers of entities of foreign companies are hosted by Australia (38), Saudi Arabia (24), India (13), Singapore (11), the UAE (11) and Brazil (10).

Alexandra Marksteiner of the SIPRI Arms and Military Expenditure Programme said: ‘There are many reasons why arms companies might want to establish themselves overseas, including better access to growing markets, collaborative weapon programmes, or policies in the host countries tying arms purchases to technology transfers.’

Of the 49 countries hosting foreign entities of the top 15 arms companies, 17 are in low- and middle-income countries. ‘Countries in the Global South seeking to jump-start their arms production programmes have welcomed foreign arms companies as a means to benefit from technology transfers,’ said Diego Lopes da Silva, Researcher at SIPRI.

About the SIPRI Arms Industry Database
The SIPRI Arms Industry Database was created in 1989. At that time, it excluded data for companies in countries in Eastern Europe, including the Soviet Union. The current version contains data from 2015, including data for companies in China and Russia. An archive of the Top 100 data set for 2002–18 is available on the SIPRI website. For this data launch, only the data set for the top 25 has been updated with the latest available information.
‘Arms sales’ are defined as sales of military goods and services to military customers domestically and abroad. Unless otherwise specified, all changes are expressed in real terms. Comparisons (e.g. between 2018 and 2019 or 2015 and 2019) are based on the sets of companies listed in the respective year (i.e. the comparison is between different sets of companies).

About the mapping of the international presence of the arms industry
This year, SIPRI is releasing its data set on the arms sales of the world’s largest arms companies along with the results of a mapping exercise on the internationalization of the arms industry. For this, a new data set was created, comprising 400 subsidiaries, joint ventures and research facilities linked to the top 15 arms companies in 2019. Sources of data included company investment filings, information on company websites, public registrars and news articles. To be included in the mapping, an entity had to have been active for the majority of the 2019 fiscal year; be located in a country other than the one in which its parent company has its headquarters; and (a) manufacture military goods or provide military services to military customers; or (b) manufacture, or provide services for, dual-use goods to military customers.

This is the first of three major data launches in the lead-up to the publication of SIPRI’s flagship publication in mid-2021, the annual SIPRI Yearbook. Ahead of this, SIPRI will release its international arms transfers data (details of all international transfers of major arms in 2020) as well as its world military expenditure data (comprehensive information on global, regional and national trends in military spending).