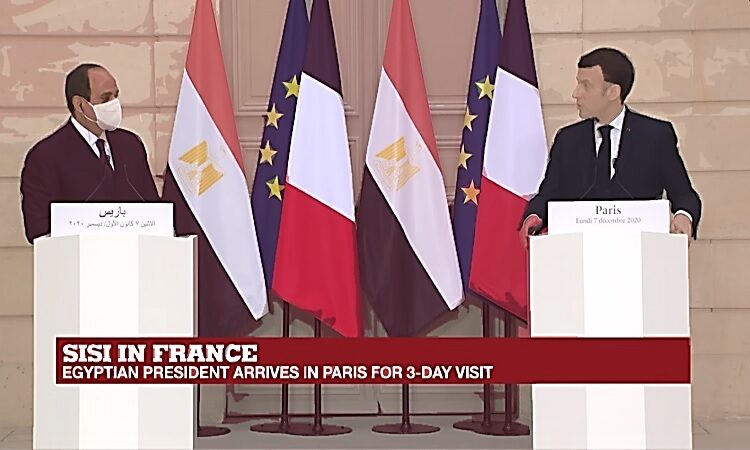 On Monday [7 December 2020], France welcomed Egyptian President Abdel Fattah el-Sisi with a cavalry parade through Paris, followed later in the day by a joint media conference.

“French diplomacy has, at the highest levels, long indulged President al-Sisi’s brutal repression of any form of dissent,” the statement said. “It is now or never for President Macron to stand up for his self-declared commitment to promote human rights in Egypt.”

President Macron justified his position with reference to the need to preserve Egypt’s ability to counter armed groups in the region amid concerns over Libya, domestic security and instability across the Sahel. “It is more effective to have a policy of demanding dialogue than a boycott which would only reduce the effectiveness of one of our partners in the fight against terrorism,” he said.

France has been a key weapons supplier to Egypt, with major contracts including the purchase of two French-made Mistral-class helicopter carriers and 24 Rafale advanced fighter jets. Talks over the exercise by Egypt of an option for a further 12 Rafale aircraft reportedly stalled in 2016, and some see the feting of President el-Sisi in the three-day visit to Paris as an attempt to revive the prospect of further French arms sales, as much as to preserve a partnership to counter terrorism.

Egypt was the first (international) country to buy France’s Rafale fighter jet when it placed its order for 24 aircraft in early 2015. Later the same year, Qatar signed a deal to buy 25 Rafale aircraft, and more recently India has agreed to buy 36 of the fighter jets.