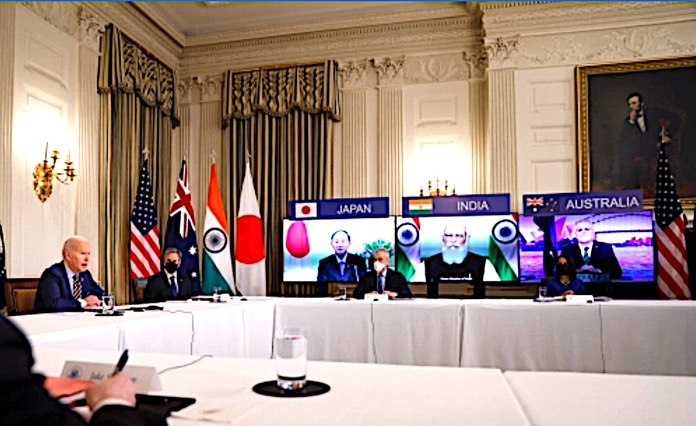 Leaders of the United States, Japan, India and Australia held a virtual summit on Friday, 12 March 2021. The meeting was an upscaled version of the Quadrilateral Security Dialogue meetings at which the four countries have previously been represented by their foreign ministers.

It was the first time the regional grouping has convened with representation by heads of government. Speaking to the media after the meeting, US National Security Adviser Jake Sullivan said “We have taken the Quad to a new level”. Mr Sullivan added, “Make no mistake, today is a big day for American diplomacy. This summit is a big deal for the President and the country.”

An ‘in person’ meeting is planned for later in the year.

After the meeting the White House released a Joint Statement, a Fact Sheet, and a transcript of remarks made by the four leaders.

What did the group agree to do?

Under the banner of the ‘Quad Vaccine Partnership‘ the group has committed to “taking shared action necessary to expand safe and effective COVID-19 vaccine manufacturing in 2021, and [working] together to strengthen and assist countries in the Indo-Pacific with vaccination”.

More specifically, the group will:

The group members will make funds available in the form of some grant aid, and also via access to concessional loans.

A senior-level Quad Vaccine Experts Group, will be launched comprised of top scientists and officials from Quad member governments. The activities of this group will include designing an implementation plan for the Quad COVID-19 vaccine effort, working with financiers and production facilities, and making additional concrete recommendations before the end of the year.

The Quad members “identified the climate challenge as a priority for the Quad and the Indo-Pacific region”, and agreed to form a new Quad Climate Working Group which a focus that includes:

The Quad leaders agreed to convene a Critical and Emerging Technology Working Group, which will:

How has the Quad Vaccine Partnership been received?

Strategic, not altruistic objectives? The proposed Quad Vaccine Partnership has generally been seen as an effort counter to China’s “vaccine diplomacy” in the region – as an activity in pursuit of strategic, rather than altruistic, objectives. As W. Gyude Moore, senior policy fellow at the Center for Global Development put it,“I don’t really understand why you can’t just give vaccines to people. It has to be cast in some [sort of] China-U.S. competition?”

The Quad’s credibility hasn’t been helped by the fact that its announcements came only days after the US, Australia and others opposed a proposal supported by over 80 developing countries, Medecins Sans Frontières and over 375 civil society organisations, to waive patent rights in order to boost production of COVID-19 vaccines. This was widely viewed as putting the profits of pharmaceutical companies ahead of the needs of people in poorer countries.

And to the extent that delivery of vaccines is shaping up as a strategic contest, observers have noted that “the Quad is joining the global vaccine diplomacy game late — China and Russia have been striking deals and delivering donated doses to more than 50 countries largely shunned by Western vaccine makers”. And in the European Union the prospect of some countries using Russia’s Sputnik V vaccine is shining a bright light on the extent to which government responses may be influenced by foreign policy objectives ahead of health issues.

America first? The need to reassure Americans that America will come first – and associated US stockpiling of vaccines and bans on vaccine exports – is also creating a challenge for the Biden administration’s credibility when it says that it is working to end the pandemic globally. President Biden is quoted as saying last week,“If we have a surplus, we’re going to share it with the rest of the world,” adding, “We’re going to start off making sure Americans are taken care of first, but we’re then going to try and help the rest of the world.”

What about Africa? A focus on the ‘Indo-Pacific’ region, when there is a need for vaccines across the world, and particularly in Africa, has also been questioned. (However, the US has also donated $4 billion to the Covax scheme, which reportedly aims to deliver more than two billion doses to people in 190 countries in less than a year.)

How has ASEAN responded? At the time of writing, the response to the Quad summit from the ASEAN capitals has possibly been conspicuous by its absence. Perhaps after the substance of the Quad announcement has been digested statements will follow from the ASEAN governments. It appears governments will be facing choices, as is evident from the extent to which China has already made vaccines available to ASEAN countries, and notably the cooperation between China and Indonesia that has positioned Indonesia to be a major regional production and distribution centre for COVID vaccines.

ASEAN countries have been reluctant to take sides in the strategic competition between the US and China. And any government faced with the urgent need to get their populations vaccinated in order to get their economies, and especially the tourist industry, back up and running, could be expected, rightly, to take the vaccines that are most readily and quickly available.

Not soon enough? Which leads to the question of the timing of the Quad’s proposals. While it is difficult to know exactly what the group will achieve and in what timeframe, the suggestion that vaccines might only be delivered by the end of 2022 is seen as not being soon enough given the impact on lives and the risk of the emergence of new and perhaps more problematic variants.