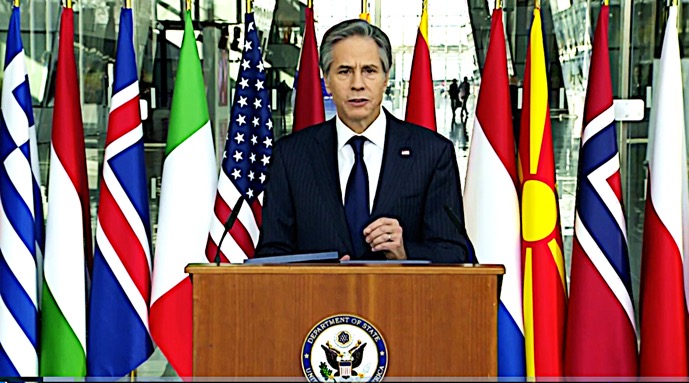 US Secretary of State Antony Blinken addressed NATO members in Brussels on Wednesday 24 March 2021 in a speech which he called on NATO members to work with the US to counter China. However in a shift of tone from that of recent weeks, he also said that the US “won’t force allies into an ‘us-or-them’ choice with China,” and acknowledged that the US knows “that our allies have complex relationships with China that won’t always align perfectly”.

In a further rejection of the approach to NATO taken by former US President Donald Trump, Secretary Blinken reiterated US support for NATO, saying, “America is fully committed to NATO, including Article 5,” the mechanism that ensures mutual defense among NATO members.

Secretary Blinken acknowledged the shortcomings of democracies, spoke about the need to “confront the recession of democracy around the world” and urged the alliance partners to work together to demonstrate what democracies stand for.

It’s on all of us to show what has always been the system’s greatest strength – our citizens, and the faith we put in them to improve our societies and institutions.  The biggest threat to our democracies isn’t that they are flawed – they’ve always been.  The greatest threat is that our citizens lose trust in democracy’s ability to fix those flaws – to follow through on our founding commitment to form a more perfect union.  What separates democracies from autocracies is our ability and willingness to openly confront our own shortcomings – not to pretend they don’t exist, to ignore them, to sweep them under the rug.

We also have to hold one another to the values at the heart of our alliances – to confront the democratic recession around the world.  We all must speak up when countries backslide from democracy and human rights.  That’s what democracies do: we deal with challenges out in the open.  We also must help those countries move back in the right direction, by strengthening the guardrails of democracy – like a free and independent press; anti-corruption bodies; and institutions that protect the rule of law.

… We must demonstrate not only what our alliances defend against, but also what they stand for, like the right of all people everywhere to be treated with dignity and have their fundamental freedoms respected.  Just because we make our foreign policy to reflect the world as it is does not mean we have to give up on shaping the world as it might be – a world that’s more secure, more peaceful, more just, more equitable, a world with greater health, stronger democracies, and more opportunity for more people.

Notably, Secretary Blinken laid bare the question of whose interests are served by US alliances. As the New York Times put it, he “warned that to maintain and sustain American support, the alliance must also serve American interests. ‘We can’t build a foreign policy that delivers for the American people without maintaining effective alliances,”’he said. ‘And we can’t sustain effective alliances without showing how they deliver for the American people.’ Of course the other 29 countries in the alliance have voters, too.”

And on a slightly odd note, Secretary Blinken pointed to the success of international cooperation in development of the first WHO-approved Covid vaccine as evidence of what democracies can achieve when they work together. Without wishing to detract from the achievement, the dispassionate observer will recall that Russia and China were also quick to develop vaccines to counter Covid-19, which appear to be safe and effective.