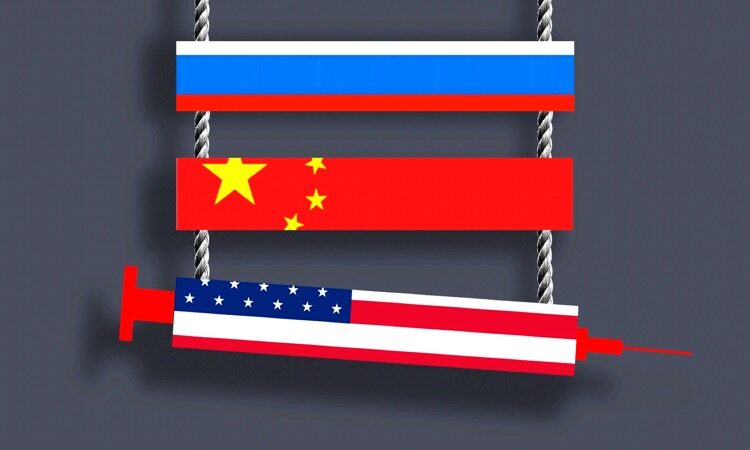 The view is frequently expressed that Russia and China are engaging in ‘vaccine diplomacy’ and a ‘vaccine war of influence’; that their capacity to supply Covid-19 vaccines is “being leveraged as a form of soft power to bolster the countries’ global standing”.

In this article Yasmeen Serhan suggests that while “U.S. and European leaders might not like it, they are effectively complaining about a problem that they helped create, and, paradoxically, they are undermining their own interests—in fact, Russian and Chinese vaccine diplomacy is helping the West”.

“It’s well established that the pandemic won’t meaningfully end anywhere unless it is addressed everywhere—something that can be achieved only through mass vaccination.” And with global vaccine production capacity limited, it is in everyone’s interests to make use of all available producers.

According to the article, China has exported around half of the vaccines it has produced, and Russia about a third of its vaccine production. The US, the UK and the EU on the other hand have exported little of the vaccines produced in their countries. They have, Serhan writes, “largely been consumed by their domestic needs”.

While Russia and China are giving vaccines to poorer countries either free or cheaply, Western countries have focused on vaccinating their own populations, and have provided no real alternative for countries that have little or no ability to purchase vaccines.

The US and the EU “have contributed billions of dollars to a multilateral initiative aimed at equalizing vaccine distribution around the world, but it guarantees to provide participating countries with only enough doses to cover 20 percent of their population, a far cry from herd immunity”.

And the US-led foray into vaccine diplomacy involving a commitment from the US, Australia, India, and Japan, to produce 1 billion vaccine doses for Indo-Pacific countries by the end of 2022, is not likely to meet the needs of those countries, or the rest of the world, Serhan suggests. “[C]ountries that desperately need vaccines are unlikely to be able to wait that long, nor is it necessarily in the world’s interest that they do so,” she writes.

As to the question of ‘vaccine diplomacy’ leveraging influence, Serhan quotes Michael McFaul, a former US ambassador to Russia, who told her that fears of Moscow and Beijing leveraging their influence over receiving countries are overblown. “We grossly exaggerate the payoff you get from trying to play geopolitics with humanitarian crises,” McFaul said. Plus, “it doesn’t do any good to say that China or Russia are using their vaccines to undermine our interests if you don’t have something else to offer.”

“With global supplies still largely limited,” she concludes, “it’s in everyone’s interest that safe and effective doses make it into as many arms as possible, irrespective of who happens to be providing them. In that sense, leaders in the U.S. and Europe should embrace the Chinese and Russian efforts, which—regardless of their intent—serve to help the West too.