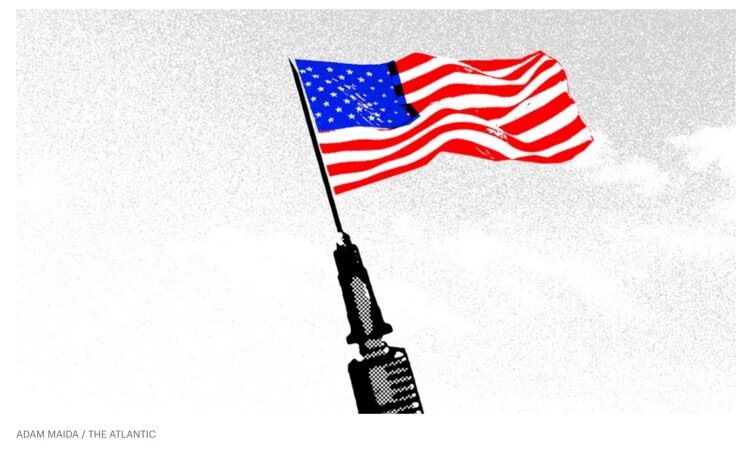 Calls for the United States to do more to facilitate vaccination programs worldwide are growing, as the realisation grows that economies will struggle to open fully, no matter how effective national vaccination programs are, while there is a significant risk from new coronavirus variants. Here Tom Frieden and Marine Buissonnière argued that the US should transfer technological know-how and facilitate the setting up of mRNA vaccine production lines around the world in order to save lives, revive economies, protect Americans from the risk of variants, and restore the US position as a reliable and trustworthy partner while advancing global health security and diplomacy.

In ‘What America’s vaccination campaign proves to the world‘, Anne Applebaum suggests that while the US failed to manage the coronavirus pandemic initially because it “is very, very bad at social trust and public-health systems”, it has turned the situation around through mass production and distribution of vaccines because it “is very, very good at large-scale logistics. And skill at large-scale logistics, far more than social trust, has turned out to be a big advantage in this new stage of the pandemic”.

She argues that producing and distributing vaccines will be a technology that shifts global politics. China and Russia, she suggests, “are so convinced of the global importance of this moment that they have been selling and distributing vaccines abroad even before their own populations are vaccinated… both countries have already identified the vaccines as a game-changing technology, and have already decided that the foreign-policy benefits of vaccine distribution abroad are too important to waste”.

In what she describes as disinformation campaigns designed to discredit Western vaccines, Applebaum sees Russia and China (and Iran) as trying to cast doubt not just on western vaccine technology, but on western political systems and democracy.

“But an opportunity for the U.S. might lie precisely here,” she writes, “in the authoritarian drive to politicize the vaccines. The best answer to Russian and Chinese strongmen who offer thousands of vaccines to countries that say nice things about them is to flood the market with millions of American doses, helping everyone regardless of what they say about the U.S. or anyone else… if American democracy is no longer a trusted product, American efficiency could be once again.”

“Within a matter of weeks, a majority of American adults will have had their first dose of a vaccine. What if the U.S. then begins to pivot from mass-vaccinating its own citizens to mass-vaccinating the rest of the world? Americans can’t do social trust, but we can do vaccines, plus the military logistics needed to distribute them: planes, trucks, cold-storage chains. The best cure for propaganda and disinformation is real-life experience: If people see that the vaccines work, they will eventually get one. We can end the global pandemic, improve the economy for everybody, protect ourselves and everyone else, and create the relationships that can help us deal with crises to come.”

“Vaccine nationalism is small-minded, self-centered, and ultimately self-defeating, because COVID-19 will not cease to be a problem until no one has it. This is the moment to think big, the moment for generosity and big ideas. As our massive logistical investment in refrigerated transport begins to pay off, the question for Americans is not just how we can enter the game, but how we can change it.”

There’s a lot more flesh on Applebaum’s argument in the original article, adding usefully to the current debate about size and shape of western vaccine production and distribution.