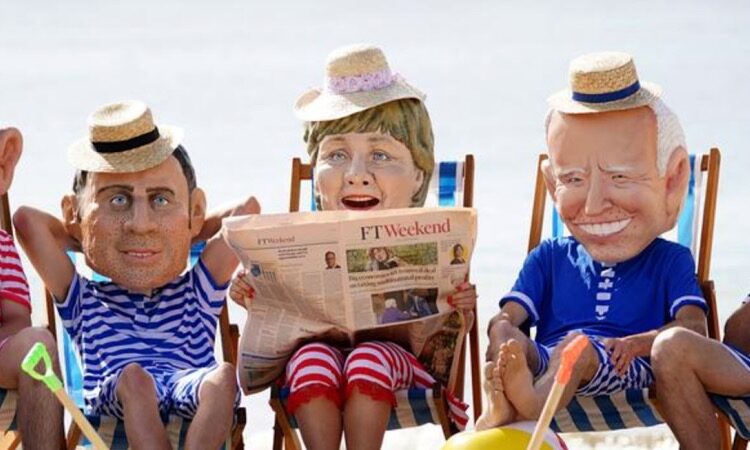 The results of the G7 summit in Cornwall have received considerable criticism. For many it was simply a staged production involving smoke and mirrors. Behind the thoroughly estimable objectives littered throughout the communique can be seen the inherent weakness of the G7 grouping. Once mighty, now best at papering over its growing irrelevance.

The “build back better” slogan is literally strewn throughout the communique in what is an awkward attempt to flatter President Biden through repeated alliteration. This among other phrases in the communique distract from the reality that Biden came to Cornwall weak and getting weaker at home as Congress obstructs or waters down some of his signature policies, and the Republicans, notably in the State legislatures, undermine the very liberal democratic values the President endlessly talks about.

Despite expectations in some quarters that the Americans would stamp their world view and priorities on the G7, it is clear from how the communique deals with Russia and China that the European concern for strategic autonomy was influential in its drafting. The Indo-Pacific, the theatre of US-China competition and the predominant strategic matter for the Americans, was mentioned twice in the communique. Once simply a recognition of that’s where Australia was located. Then as part of the refrain of “the importance of maintaining a free and open Indo Pacific”.

China received three direct mentions in the communique. One an expected call for a transparent investigation into the origins of the COVID-19 virus. The others in a commitment to “continue to consult on collective approaches to challenging non-market policies and practices which undermine the fair and transparent operation of the global economy”, and to call on “China to respect human rights and fundamental freedoms”.

This weak restatement of the well-rehearsed complaints on the part of the Europeans and North Americans must have greatly disappointed the Biden Administration that would have preferred stronger, more confrontational and denunciatory language. While “the peaceful resolution of [Taiwan] cross-Strait issues” was endorsed, and concern was expressed about “any unilateral attempts to change the status quo and increase tensions” the East and South China Seas, China was not specifically mentioned in these contexts. If the expectation of the Biden Administration was to galvanise the G7 troops for the great, century defining competition with China, it wasn’t fulfilled.

The initiatives on vaccines against the pandemic and to address the significant infrastructure needs across low and middle income countries are in large part also directed at competition with China. Or to be more accurate, they are attempts to catch up with China after several decades where China advanced its Belt and Road initiative and its recent effective use of vaccines to build relationships in developing nations. But the communique does not reflect the American view that an existential struggle with autocrats is the defining issue of the time.

On Russia the language was more forceful, reflecting Europe’s strategic issues. Russia was chastised for “its destabilising behaviour and malign activities, including its interference in other countries’ democratic systems”. It was called on “to urgently investigate and credibly explain the use of a chemical weapon on its soil” and to “hold to account those within its borders who conduct ransomware attacks, abuse virtual currency to launder ransoms, and other cybercrimes”. The communique offered strong support for Ukraine, tasking Russia to “withdraw the Russian military troops and materiel at the eastern border of Ukraine and on the Crimean Peninsula”.

Other clear evidence of the higher profile of European concerns can be seen in the references to Belarus, Ethiopia-Tigray, the Sahel, and Libya. These also are priorities in the strategic considerations of the Europeans. Instability in North Africa and the Sahel is of far more immediate concern than the confrontation between China and America in East Asia.

In the interests of both alliance harmony, and because of the very real threat that Russia poses in the East, the Europeans are always going to accommodate to some degree the American desire to present a united front on trade and human rights issues. But they are not prepared to disconnect from China, and in fact they are moving towards closer, but more pragmatic and equal, economic relations with them. The softer language on China in the communique, and the more indirect criticisms, in contrast with the harsher treatment Russia received, however, demonstrate the limits of European accommodation of President Biden.

The text of the communique displays very careful drafting to meet the differing priorities of the G7 parties. The outcomes are evidence of the geopolitical shift taking place. Of course the Europeans won’t walk away from the US, they have too much invested in the security alliance and in the economic and trade relationship. Nevertheless, they know the power relationships are shifting and that America’s interest no longer mirror their as they did in the Cold War years. They see that their prosperity will rely on engagement with America and China. It remains to be seen if future G7 communiques will be able to paper over what will be an increasing divergence of interest.