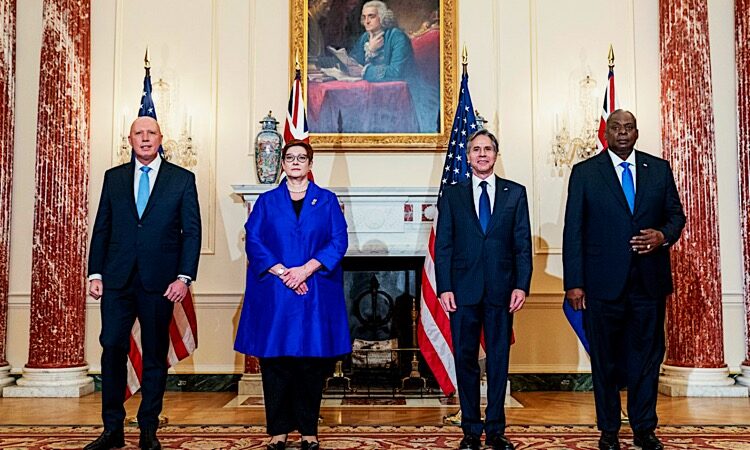 Nothing exemplifies the loss of national sovereignty, and the abandonment of strategic autonomy, like handing the war decision over to the US. The submarine issue is simply a blind. AUKUS just a distraction.

The Australia-US Ministerial Consultations 2021 (AUSMIN) joint statement records Australia’s surreptitious accession as the 51st state of the Union. That it has been done without a vote, or even a serious national or parliamentary debate, highlights the accompanying loss of democracy.

Australia has effectively surrendered its right to say what kinds of military platforms and weapons can be brought on to, or stationed in, its territory.

The Australian government will permit “the rotational deployment of US aircraft of all types in Australia and appropriate aircraft training and exercises”. It will facilitate “increasing logistics and sustainment capabilities of US surface and subsurface vessels in Australia”. Alarmingly, Australia will “[E]stablish a combined logistics, sustainment, and maintenance enterprise to support high end warfighting and combined military operations in the region”.

This represents a complete and total subordination of Australia’s interests to those of America. It is not possible to say no to America when so deeply entwined with US military war preparations.

The total abrogation of the right of Australia to independently determine its own strategic situation is contained in just three words in the joint statement. The ministers agreed that the purpose of giving Australia over to the US military as a base was to “deter our adversaries”. Australia now has “adversaries”!

Australia is now openly a cog in America’s war plans. In plain language, Australia now refers to China as an adversary, that is an enemy, and has acceded to turning itself into a launching pad for “high end warfighting and combined military operations in the region”. Think what is enveloped in that phrase!

At best this is ill-considered and reckless rhetoric, at worst a potentially irretrievable step towards war wherever and whenever the US decides to embark on one.

The implications of this for Australia need to be understood. First, it appears these concessions license the deployment of nuclear weapons to Australia.

The US strategic nuclear triad and its tactical nuclear capability is spread across a range of delivery means, including US aircraft, and surface and sub-surface platforms.

If Australia is to be a base for sustaining operations it seems inevitable nuclear weapons will enter, transit or be stored here. Australia is too far from the South China Sea to be for launching conventional operations.

The transfer of technology related to nuclear-powered submarines and cooperation on other technical and industry matters — like hypersonics and space — are sops to the eager Australians desperate to be big international players.

It is unlikely the US will offer up the family jewels; the leading edge innovations and technologies that provide America’s commercial as well as military advantage will be withheld. The intellectual property that gives the US its technological military edge will also be essential to its national economic competition with China.

None of the US’s apparent generosity will provide short term advantages to Australia.

The guarantees under ANZUS are not changed. The ability of Australia to defend itself won’t be altered substantially until at least 2040.

However, access to Australia as a base hosting a “logistics, sustainment, and maintenance enterprise to support high end warfighting and combined military operations”, and unfettered access for US forces and platforms, gives America some strategic depth and somewhere to retreat to if, as many expect, the US will be expelled from the South China Sea in the first engagement with China.

Then, under the pretence of being war ready, and as a logical step for protecting US platforms using Australian facilities from long range or stand-off attacks, it won’t be long until we see missile defences deployed. That’s because all of this means Australia will have become a target.

The enormity of these concessions, and the abrogation of sovereign responsibility for the security of Australian citizens, has largely been met with equanimity bordering on somnambulism by the Labor Party.

In apparent disregard for national sovereignty, strategic autonomy, and national interest, the Opposition has meekly gone along with the government arbitrarily shifting Australia on to a dangerous warpath without the endorsement of the Australian people.

The Opposition seems to comfortably and uncritically countenance the prospect of the total disaster of following the US into war. There is little satisfaction in knowing Labor will share in the opprobrium of history if there are Australian deaths to be summed as a result of a war they implicitly endorsed.

Preparing for war in the name of peace has an awful record of going wrong and producing a perverse outcome. The war parties are often the loudest in the policy debate, but, a war with China is something to be avoided at all costs. Turning Australia into a US fortress, another Alamo, must be resisted.