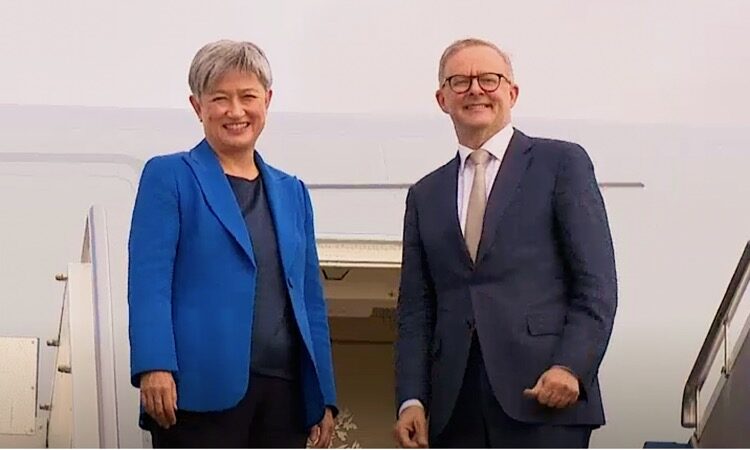 It’s far too early for a running commentary on the Albanese government. The new Prime Minister handled himself as well as could be expected in Tokyo and dispatching the Foreign Minister to the Pacific while her Chinese counterpart is in the region is a good move. Hopefully, the new Cabinet will bring a new perspective to foreign and strategic policy before being dragged down into the delusional world of the military/security/intelligence establishment.

The Prime Minister already must have felt he was in an alternative reality at the Quad meeting. It would be nice to think he had his fingers-crossed behind his back when he signed on to the many nonsensical things in the Quad communique.

He should have been incredulous, given the signatories, that the communique asserted without embarrassment that “all countries must seek peaceful resolution of disputes in accordance with international law”, and when it unimaginatively repeated the now formulaic statement about “our strong resolve to maintain the peace and stability in the region”.

The American President who had been instrumental in the Iraq War and supported the Afghanistan invasion, without irony, also urged “peaceful settlement of disputes without resorting to threat or use of force, or any unilateral attempt to change the status quo”, and affirmed a “resolve to uphold the international rules-based order where countries are free from all forms of military, economic and political coercion”.

But this is exactly the American formula for conducting foreign affairs; with military forces deployed across the globe, sanctions on everything that moves, and nations browbeaten into fatuous communiques.

On global warming the communique is flaccid. The initiatives identified are piecemeal, not transformational, without recognising the inevitability of passing 1.5°C and the looming worldwide crisis of 2.0°C plus. The Pacific Island nations in particular might not be heartened by the communique.

The Quad said they “will further strengthen our cooperation with Pacific island countries”, which includes “to mitigate and adapt to the impacts of climate change, which pose especially serious challenges for this region”. None of the actions identified in the document address the fact that the seas are rising right now and the island states are disappearing and suffering today. The Pacific nations might think building “climate information services for developing an engagement strategy with Pacific island countries” a bit vague and inadequate as they physically vanish.

There can be no disagreement with the priority for pursuing “green shipping and ports aiming for a shared green corridor”. But this is a daunting project at the scale needed to achieve meaningful reductions in emissions. This announcement appears to be blatant greenwashing.

The International Maritime Organisation has identified technological, operational, and market-based measures to reduce emissions from shipping. Shipping and port operations are major contributors to emissions, but none of the biggest ports are operated by Quad members. Of the nine biggest ports in the world by volume, eight are Chinese and one is Korean. China is also the biggest owner of shipping and container assets. Excluding cooperation with China seems self-defeating.

It was disconcerting that the new Prime Minister felt it necessary to parade the fact he “was a part of a Government that brought the US Marines to Darwin under Julia Gillard” in order to ingratiate himself with President Biden. This boasting about the deeper engagement with the American war machine, and the dilution of national sovereignty, doesn’t bode well for the important adjustments to Australia’s strategic and defence policies this government needs to undertake.

The importance of revisiting the deployment of US forces to Australia, and of finding an exit from the AUKUS arrangement to acquire nuclear powered submarines, is evident from President Biden’s comments on defending Taiwan. Whether he misspoke or deliberately sought to move the US position to a more aggressive policy is unclear. His words should, in any event, force Prime Minister Albanese and his ministers to take the prospect of a war with China over Taiwan seriously.

US military figures make no secret of the fact that they see the ADF as an automatic plug-in to American forces. Defence cooperation is directed at “modernising in a way that made both nations’ forces not just interoperable but almost interchangeable”, according to the commander of the US Army in the Indo-Pacific. He said, “If you have similar attack aviation, similar lift aviation, similar ground combat vehicles, similar air defence, short-range, long-range, similar fires, networks, then … you’re certainly going to be together.’

Is this the default position of the new government? That Australia will continue down the path of interchangeability with US forces, continuing to allow the US to exploit Northern Australia as a base from which to launch operations into East Asia, until Australia loses all control over the war decision? That’s the working assumption of both Australia’s military/security/intelligence establishment and the US military.

A war with China over Taiwan will not be just a rerun of the Ukraine war on water! It cannot be fought as a proxy war, where those dying and the infrastructure being destroyed belong to Taiwan and while America and its allies resupply the resistance until the Chinese are exhausted. Because that won’t happen. There is no geographically contained war over Taiwan.

If China is convinced that US forces will physically defend Taiwan it would be open to the Chinese to widen the war from the beginning, attacking Japan, Guam, and Australia. Irrespective of the scope, course, duration, or outcome of the war, Taiwan would be devastated, world trade disrupted, East and Southeast Asia destabilised, and every nation, including the US, weakened. It could go nuclear.

Before the seductive power that security classifications, codeword documents, need-to-know briefings, and the jargon of militarist advisers blunt the critical faculties of ministers, which it almost always does, the government needs to consider the matter of war.