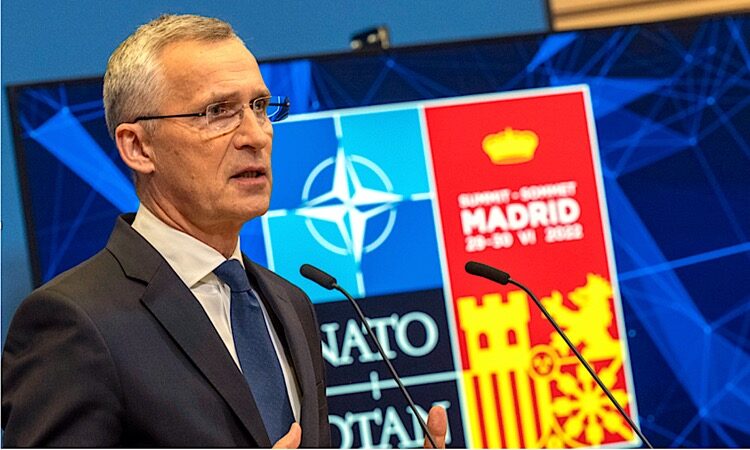 In the national security domain, changing governments is like changing spark plugs – in that nothing else changes. From their darkened cloisters the militarists befuddle new ministers with gloomy prognostications while proffering prophylactics like deterrence, alliances, and interoperability. And so the Prime Minister is off to the Madrid NATO conference.

According to Albanese “That will be an important conference, an important summit, because of what is happening in Ukraine.” True for European NATO members. Apart from the photo opportunities and the glad-handing, why is it important for an Australian Prime Minister to attend?

Part of Albanese’s justification is that a number of important regional partners and allies – the leaders of South Korea, Japan, and New Zealand – will be attending. However, he has just met with some them or will have the opportunity to discuss regional issues with others in regional multilateral fora.

Along with the other regional nations, Australia “accepted the invitation to be NATO partners“. What this entails is unclear. A further entanglement in security arrangements – like AUKUS or the Quad – without any clear explication of how Australia’s interests are met by ganging up in military mobs?

Albanese was correct to depict the Ukraine War as “the barbaric and illegal war being undertaken by Russia”, but what is the military threat to Australia that warrants close relations with NATO, a Europe-focussed military alliance. What does this relationship offer that ANZUS and other relationships don’t?

Albanese mysteriously noted the Madrid conference would “deal with the other issues, though, as appropriate”. Adding, “from time to time…those issues aren’t released publicly”. However, the conference’s agenda isn’t quite as shrouded in secrecy, and NATO Secretary General Jens Stoltenberg has been forthcoming.

NATO’s force structure, posture, and readiness in the face of the Russian threat is on the agenda. Bolstering the capacity of the Ukrainian forces will also be discussed. As will the accession to NATO of both Finland and Sweden and Türkiye’s security concerns. Members’ defence spending is a perennial agenda item. There is no vital Australian national interest in any of these matters. If considered, Asia Pacific matters will occupy the outer margins.

NATO’s new strategic concept is the key issue. Stoltenberg has confirmed that the new concept will refer to “climate change, cyber, hybrid, and space” for the first time. It will denote “Russia as the most significant and direct threat to our security” and will make the first reference to China and “the challenges it poses to our interests, security and values”. By “our” Stoltenberg, of course, is referring to European security and interests.

The NATO project in Ukraine has been questioned. Many argue the war is in part the consequence of NATO’s disregard of genuine Russian security concerns. While Russia’s invasion was illegal and its conduct of the war in brutal disregard of accepted norms and rules, the sanctions and the military assistance to Ukrainian are having perverse consequences.

The Russian economy hasn’t collapsed and the world hasn’t galvanised behind the former colonial powers. In fact the non-Anglo-European powers pointedly refuse to blame Russia alone for the war (here and here). The UN Security Council is effectively paralysed. Much of the world blames Europe for the food and energy crises. Albanese’s keenness to associate with this endeavour is a mystery.

The Europeans will undoubtedly sign up to the new strategic concept as a symbol of alliance unity. Nevertheless, many members will have their fingers crossed behind their backs. Depending on geography and their economies, NATO members will vary in their ongoing capacity and willingness to continue raising defence spending and providing generous support to Ukraine.

A long war and an extended economic downturn fuelled by inflation are sure to clash with good intentions at some point. Driven by the US’s obsessive desire to weaken Russia, the NATO members seem determined pursue the war until the Ukrainians are spent and the European economies exhausted.

But what has this to do with Australia’s defence? Despite the contemporary rhetoric, the security of the democracies is not indivisible. In the end each nation will look to its own interests, and should limit and shape its involvement with alliances, partners, and neighbours on the contribution that these make to the security of the citizens for which it is responsible.

Russia is not a military threat to Australia. In practice the new strategic concept will be primarily focussed on the military defence of Europe. That is what NATO exists for. It would not be in Australia’s defence interests to make any sort of substantial contribution to the defence of Europe. It probably diminishes Australia’s standing among the Europeans when the Prime Minister makes up the cheer squad numbers at a conference where Australia has such a minimal stake.

Australia’s interests are not obviously met by joining gatherings on distant shores with leaders sharing different strategic concerns. It appears, like the former Prime Minister, Albanese likes, or has been convinced, to flock with world political leaders to exchange blandishments and empty phrases to no real practical ends.

Given the resurgent export figures of China, the Prime Minister might have better served Australia’s sovereign interests by having the courage and independence to visit Beijing instead and to seek a reset of Australia’s most important trading relationship. In the context of raging inflation and economic concerns, the climate crisis, global supply chain problems, and mounting strategic tensions, rapprochement with China could bring enormous benefits.

The Asia Pacific remains at the heart of Australia’s economic and strategic interests and the crucible where Australia’s prosperity and peace will be forged. To take the first step in rebuilding the relationship with China through a bold move would not be subservience, or appeasement. It would be brave leadership in the vital national interests of Australia and its citizens, and more mature statesmanship than hobnobbing at NATO conferences.