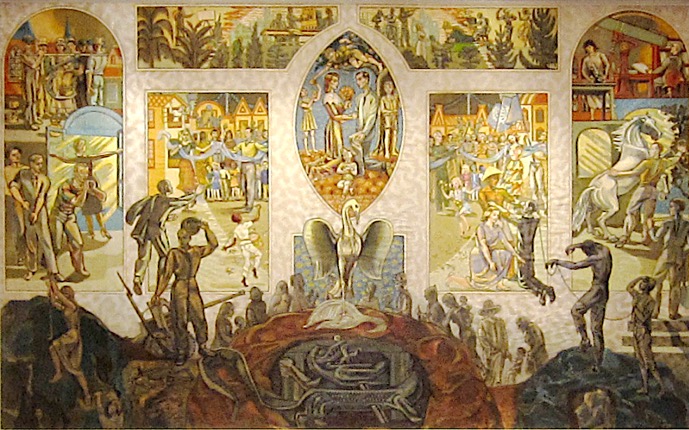 For liberals, economic engagement, deepening interdependence, and political stability, or peace, are intimately connected. Realists, on the other hand, warn that the inevitable asymmetry that arises from international economic relations is a vulnerability: a weapon for use against dependent nations.

The dissolution of the Soviet Union saw a global separation of state and market, and of security and economics. The dilemma for states today is how to secure the benefits of free trade, foreign investment, and lowest cost production, while simultaneously protecting their political autonomy, cultural values, and social structures. Too many political leaders believe the answer lies in threatening a world-engulfing conflagration.

This compromise was only possible because the unmatched economic and military power of America enforced a degree of geopolitical stability. An open free-trading economic order based on rules favouring the hegemon permitted the US to leverage its size and strength to maximise wealth creation. Although there was always an internal contradiction. Globalisation saw technology and economic power gradually disseminated throughout the rules-based order from “the hegemonic core to the periphery” and new players, and in particular China, emerged to challenge the order and the economic primacy of the hegemon.

There never was any consensus about the connection between security and the structure of global trade, finance and economics, but the tension between liberals and realists was effectively muted by the prosperity generated by globalisation. However, the rise of China has strengthened the realist critique of interdependence.

As Christine Lagarde, President of the European Central Bank, recently observed “the earlier advance of globalisation largely relied on a “Goldilocks” scenario of relative economic and geopolitical stability”. She noted that “in recent years we have seen a shift towards new industrial policies, mainly led by China and the United States, in which geopolitical biases are being introduced into strategic supply chains at the expense of efficiency considerations”

Lagarde predicts that “International firms will still face strong incentives to organise production where costs are lowest, but geopolitical imperatives might restrict the perimeter in which they can do so”. By perimeter Lagarde means regionalisation.

The unresolved tension between liberal and realist models is apparent in the new NATO Strategic Concept. The Concept opens uncontroversially with the statement that this is “a critical time for [the Allies’] security and for international peace and stability”. However, it quickly displays a realist bent, stating the NATO members desire to live “where each country can choose its own path, free from aggression, coercion or subversion”. In “a world where sovereignty, territorial integrity, human rights and international law are respected”.

Ironically, NATO is a military alliance and also an alliance between states with deep economic ties and high levels of interdependence among the members, including the US. In fact, most members are also in the European Union, a supranational treaty arrangement of extensive interdependence and a measure of surrendered sovereignty. Yet, according to the new Concept, NATO’s “unity, cohesion and solidarity” is not built on these economic interdependencies but on “the enduring transatlantic bond between our nations and the strength of our shared democratic values”. Political convergence, not trade, is the glue.

In the absence of an undisputed hegemon, can a rules-based order really be imposed by force or the threat of force without fracturing? Or is employing force to maintain the existing order anything other than a pretext for America’s attempt to reestablish its hegemony?

NATO’s mission has shifted from the military defence of Europe to the defence of the global economic system established by the US. The Madrid communique states “[NATO members] face systemic competition from those, including the People’s Republic of China, who challenge our interests, security, and values and seek to undermine the rules-based international order”.

Claiming a similar “commitment to the rules-based multilateral order and to universal human rights”, the G7 declared it was driven to “maintain and strengthen a safe, resilient, equitable, and rules-based open global economic system”. But not too open. In a similar manner to NATO, the G7 said it would “increase [its] vigilance to threats, including economic coercion, that are meant to undermine global security and stability”.

The NATO and G7 announcements confuse international economic interdependencies with the narrow band of political preferences of their members. As with NATO, the small group of G7 states is allocating to themselves the right to enforce their preferences as universal. This is a major step towards cementing in armed hostile camps of states. The G7’s 2022 Resilient Democracies Statement (pdf) effectively says they will “respect other states’ territorial integrity and sovereignty” providing they align with European and North American political preferences and geopolitical stance.

The accompanying calls for decoupling, diversification, and regionalisation also seem to be a recipe for building competing geopolitical blocs and embedding escalating militarisation. And these calls are probably self-defeating. Europe’s dependency on global trade “is such that a hard-nosed decoupling from Asia would be immensely costly, possibly eroding democratic consensus among European citizens, and would still require many years”.

The North American and European states, plus some others like Australia and Japan, seem determined disrupt the order that has maintained peace and prosperity. Cloaked by a lot of ideological rhetoric, a very real, and dangerous, militarism is already trending towards international division and regionalism. The way to save a rules-based order founded on interdependence and compromise is through adaptation, negotiation and diplomacy, not war or threats of war.

These policies are incoherent and the realist project doesn’t make sense.

Our leaders should tell us how many should die for this defence of their rules-based order.

Image: Oil painting by Norwegian artist Per Krohg, which hangs on the UN Security Council’s east wall, featuring a central image of a rising phoenix surrounded by images of war and disharmony at the base of the mural, with more peaceful elements above.