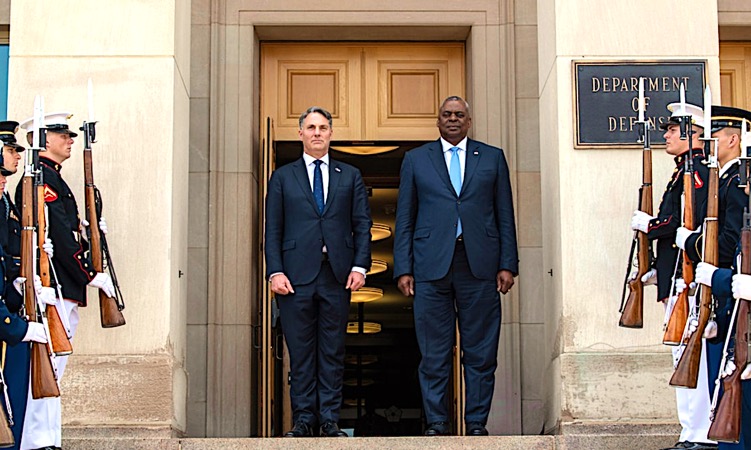 New Defence Ministers ritually wend their way to Washington to offer up jaded homilies. Full of hagiographic accounts of ANZUS and strained assertions of shared values, they often also display a submission to America’s strategic objectives. The new Minister’s visit, however, foreshadows a dangerous abandonment of fundamental elements of national sovereignty by the Labor government.

“The Pacific defines Australia as a global citizen” is characteristic of the meaningless strategic nonsense that marked Richard Marles’ recent Washington address. What does that mean? In the Defence Minister’s Orwellian logic: dependence is freedom, submission is sovereignty, and defence is deterrence. And the ardent militarists in the Department go soldiering on with the new Minister in tow.

The Minister said “[the ADF] will move beyond interoperability to interchangeability” and all the enablers will be in place “to operate seamlessly together, at speed” with the Americans. Again, what does that mean in practice? Why doesn’t the media commentariat pursue him for an elaboration?

Does this means the Australian military force, a fundamental institution of national sovereignty, will be reduced to a minor force element role in the American war machine? This is a highly consequential and deeply political proposal.

What does “interchangeability” mean for the independent command and control of the ADF? What expectations do the Americans have of the availability of Australian forces in the event of a crisis? Has the elected government’s freedom to decide on war been compromised?

Marles counterintuitively also asks why Australia exercising independence from America “would not in fact constrain national sovereignty rather than enhance it”. Here he confuses security and sovereignty, and advances compromising the latter for the false promise of the former.

Marles also endorses the American Secretary of Defense’s view that it is the ability to “operationalise [allied militaries] in ways that transcend sovereign boundaries that’s truly unique”. He agrees that “those countries that are able to pool their resources and combine their strengths will not only have a competitive advantage, they will be less vulnerable to coercive statecraft”. But in an alliance some members are inevitably more equal than others. Anyway, what does “transcend sovereign boundaries” actually mean?

In summary, Marles advocates that Australia surrender its sovereignty by submitting its most crucial national responsibility, the independent war decision, to a great power. A bizarre understanding of sovereignty that encompasses Australia “making big investments in defence capital infrastructure to support, maintain and sustain the growing number of Australian and American forces”. Or supplementing the US Defense budget!

The distinction between the US and Australian military forces is being erased as the ADF is turned into an American plug-in and as Australia becomes an armed base for US forces; paying for the privilege of becoming a nuclear target in the process.

Marles’ grasp of the substance of strategic policy appears thin. In saying “Events in Europe underline the risk we face when one country’s determined military build-up convinced its leader that the potential benefit of conflict was worth the risk”, Marles arguably puts the cart before the horse. Putin’s strategic objectives were undoubtedly formed long ago and motivated the military build up. The preparations Putin put in place before invading indicate he didn’t just wake one morning and find he had a big military force.

That aside, there is a far more important lesson for allies of America from the Ukrainian war. The US will do anything up to actually militarily engaging with a nuclear armed power. The effective deterrent was Russia’s nuclear arsenal, not the overwhelming conventional might of the US.

Marles completely misses the point when he says that the US and its allies need to contribute to “a more effective balance of military power aimed at avoiding a catastrophic failure of deterrence”. In the five months since Russia invaded Ukraine, the US could have mobilised and deployed to Europe a force capable of expelling the Russians. This was never in prospect. The US was deterred.

Marles declares that the new Labor government is “resolved that Australia will take greater responsibility for its own security”. This includes investing in “the range and lethality of the Australian Defence Force so that it is able to hold potential adversary forces and infrastructure at risk further from Australia”. What does this statement mean?

The Minister would be blatantly dissembling if he denied China is the “potential adversary” he has in mind. However, even a novice Defence minister wouldn’t suggest that the ADF alone could successfully defeat a determined Chinese military action against Australian interests in Southeast Asia. It would be similarly naive to believe Chinese forces might be held at a distance from Australia, if that is what he means.

Even with the nuclear powered submarines when they arrive in the 2040s, 2050s, or 2060s, Australia’s capacity to prevail alone against China will continue to be non-existent. The reference to “infrastructure” indicates Marles has either attacking China’s homeland in mind, or, more likely, the Minister is thinking of the Chinese operating from a base constructed in Indonesia, or Cambodia, or the Solomons, or PNG – take your pick. In such improbable circumstances its seems unimaginable that China would go to all that trouble and then come unaware of or unprepared to counter Australia’s capabilities.

The Minister avoids saying Taiwan. However, everything in the speech reveals that Australian strategic planners expect to be in lockstep with the Americans if China invades Taiwan. The Ukraine war has shown that the US won’t fight China and risk a nuclear exchange. It will again be deterred. America’s posturing in East Asia is all for show and China knows it can call the American bluff. Marles’ enthusiasm for deterrence is a cloak for the enthusiasm of the Defence leadership for more and more toys.

There is much more in Marles’ speech that needs to be explained to the Australian voters. Democratic values demand the public is aware of and can influence strategic policy decisions that seem to self-neuter the government and surrender sovereignty. But if the government intends to delegate the war decision to the crumbling, fracturing, faux democracy that is the US, then it should own up to the policy, and begin by explaining the implications and ramifications of “interchangeability”.