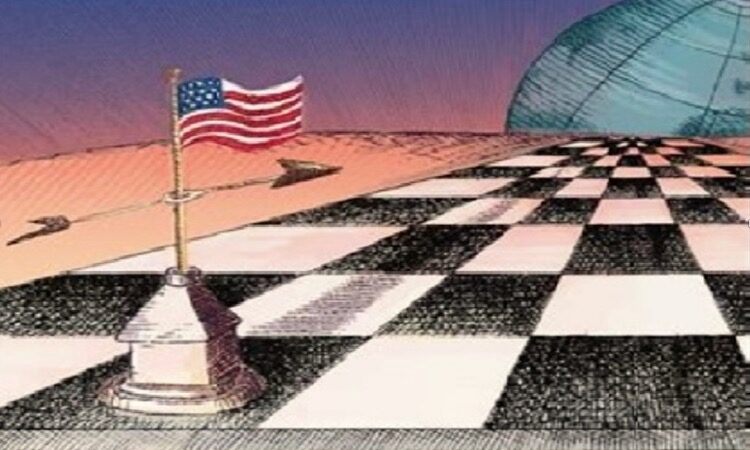 The Defence Strategic Review, or the Porcupine Strategy, cannot ignore the reality that the greatest threat to Australia’s security arises from its uncritical attachment to the United States, and to the assumption that the US will persist as a reliable and rational partner into the future.

Faith in America’s economic and technological potential to challenge China in the longterm could prove to be Australia’s main strategic weakness. If the social and political situation prevailing in America emerged anywhere else, Australian analysts would be warning of an incipient failed state. The convention among the Five Eyes intelligence arrangements is that the partners don’t spy on each other. However, it’s not necessary to examine the hidden entrails of the US’s military and political institutions to understand the forces that are sapping the hegemon’s potential. The agents of decline are publicly visible.

President Biden has been clear that the competition with China will be won in the race for dominance in emerging technologies. Australian policymakers are pinning their hopes on a nation whose president believes America “can channel the full talents of all our people into a greater measure of hope and opportunity for our nation and for the world” and “lead the world in future industries and protect our national security”.

President Biden made these remarks at the launch of the The CHIPS and Science Act. He added “[America] used to rank number one in the world in research and development; now we rank number nine. China was number eight decades ago; now they are number two”. In fact there has been a major global shift in scientific research and, while America remains a research powerhouse, on most metrics it continues to slide. Despite the President’s ambitions for The CHIPS Act, there is a real America other than the one imagined in his expansive and glorious vision.

America is being overwhelmed by a tide of irrationality. Scholars and surveys have been signalling this for decades. Surface phenomena such as the vitriolic politics between progressives and conservatives, and Democrats and Republicans, exist on deep and incommensurable belief systems. The forces of anti-intellectualism, ignorance, prejudice, and zealotry are strong and rampant. Irrespective of the money the government pumps into research, it is not clear it will be able to marshal the human and social resources to compete.

These are the very sectors of the economy Biden hopes will win the technological race with China. The determination of any Administration, especially a Republican one, to bring the nation together in the quest to match China is questionable. The same survey found that 76 percent of Americans had little or no confidence in elected officials and only 2 percent had a great deal of confidence in them. Confidence in the military, high school principals, religious leaders, and journalists is moving in the same direction. National leadership is in short supply.

These American Christians understandably also believe society is changing in undesirable ways. Over the past decade Americans who identify as Christian has fallen from 77 to 65 percent and the number of religiously unaffiliated has grown from 16 to 26 percent. Among other reactions, America has seen a surge in attempted, and successful, banning of books. More worryingly, recent scholarship has connected a constellation of beliefs known as “Christian nationalism” with the January 6 assault on the Capitol Building in Washington; dubbed “a Christian insurrection” by one analyst. In an environment of turmoil the bizarre and the conspiratorial flourish. Loosely connected shadowy groups who believe they are engaged in spiritual warfare between supernatural divine and demonic actors are edging toward the centres of power.

More visible is the impact Trump has had on the Republican Party. The danger is that the collection of anti-intellectual and superstitious conspiracy prone groups are to some extent lost from sight in the throng that support Trump and believe the 2020 election was stolen. The success of Trump endorsed candidates in the primaries for the mid-term elections for Congress will bring some of these fringe groups into mainstream politics. Incredulously, impeaching Biden might be the highest priority for after a successful mid-term election for Republicans.

These trends amount to a political powder-keg; ripe for some demagogue to exploit the differences and tensions in the pursuit of power. Trump nearly succeeded and there are undoubtedly more ruthless and ambitious politicians, more given to extreme policies and political violence, and more unpredictable and volatile when it comes to foreign and strategic policy priorities. There is a degree of resignation in America about the inevitability of something along these lines happening. Recent polling shows 66 percent of Americans believe that political divisions have worsened since the beginning of 2021, and 62 percent expect political divisions to increase. Nearly two thirds anticipate an increase in political violence in the next few years. A  civil war is thought very likely in the next decade by 14 percent of Americans and 43 percent believe it to be somewhat likely.

The rebirth of a lost innovative technological utopia requires a society that values scientists and research. It requires a vibrant, stable polity that tolerates debate, dissent, and difference, and supports objective research standards. America looks nothing like this.

Operating on the assumption that future economic and military power, and global influence, will accrue to the technologically dominant power, Australia is betting the US will prevail. A better wager for Australia would be to seek global cooperation and accommodation.