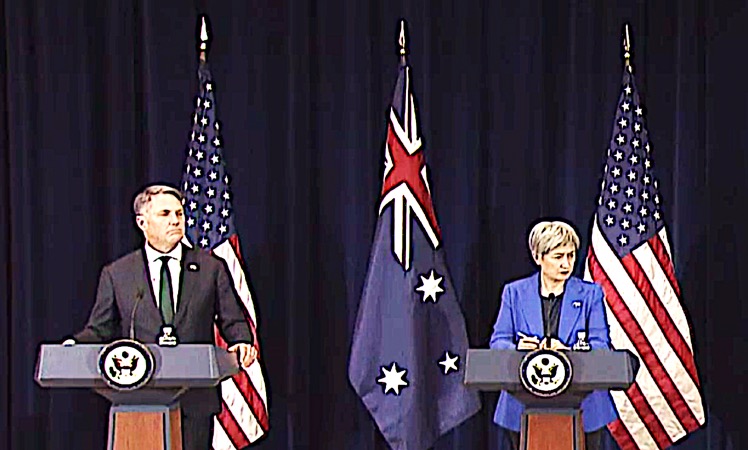 AUSMIN 2022 further advertised how the lure of submarines has facilitated the US military colonisation of Northern Australia. AUSMIN meetings are now performative art. The Australian side acts as though it has agency and the Americans pretend they aren’t just a resentful fading hegemon.

There is nothing new in the AUSMIN communique, just more of the same Australian forelock tugging to America. A rerun of the same mutual condemnations and expressions of serious concern about China, Russia, Iran, North Korea, and Myanmar. As though they haven’t been expressed endlessly during the busy summit season just past. The same old issues are raised about supply chains, cybersecurity, and corruption. The same demonstrably inadequate climate actions are lauded.

Not that these aren’t important, just that desperately dressing up failures is tedious. The same homilies are repeated about the failings of the world that would be miraculously repaired if only the less enlightened nations would just let ‘the West’ run their affairs.

However, the meat for the Americans in the communique is the basing concessions; otherwise known as the surrender of sovereignty. The Americans have brilliantly played successive Australian governments by casting the shiny lure of nuclear submarines out somewhere in the distant future and reeling in control of Australia’s defence policy.

The long but accelerating breakdown of Australian resistance to becoming an American base, and home to key elements of America’s nuclear war-fighting strategy, continues without controversy. It is tragic and dangerous. Without Parliamentary debate or public consultation, Defence Minister Marles has overseen the further abdication of responsibility for Australia’s defence policy. Which now is reduced to providing a forward base for American forces.

Farcically, the AUSMIN communique encouraged “the PRC to take steps to promote stability and transparency in the area of nuclear weapons.” There has been no justification or explanation from the government for the stationing and rotation through Australia of nuclear armed bombers and USN vessels. Once Australia had a principled stand against nuclear weapons. Now it has licensed America to fight a nuclear war from its shores.

The cleverness of the Americans offering the bauble of submarines was revealed at the post-AUSMIN press conference. Patronisingly, the Americans made a concession to Australia’s domestic politics by authenticating the terminology of ‘a capability gap’. An odd concept that is really camouflage for the military’s equipment replacement syndrome. But Marles laps it up and the term will undoubtedly feature in the Defence Strategic Review.

It must be conceded now that even if there was such a thing as a capability gap for nuclear-submarines, and that is yet to be described adequately, the timing and the procurement mechanism seem unresolved. The submarines are a pretty bauble dazzling Australian policy makers with grandiose ideas. If Australia needs them, a debatable proposition, the submarines likely won’t get wet until 2050 or beyond as the challenges facing the US industrial-base in “building both Virginia class (SSNs) and Columbia-class ballistic missile submarines (SSBNs) at the same time” are already well known. That’s a gap!

How little importance America puts on Australia’s sovereignty is also now clear. It is reasonable to the mind of powerful Republican Congressman Rob Wittman that Australia would be satisfied with a dual-crewed American submarine that won’t belong to Australia but would “be an asset that [Australians] have that element of control with”. Australia’s national independence and sovereign defence responsibility would be satisfied in his view if the US had “51 per cent control and command and Australia has 49 per cent”, and the submarine would return to America in a crisis.

There can be no pretence now that Australia is not just a colony.