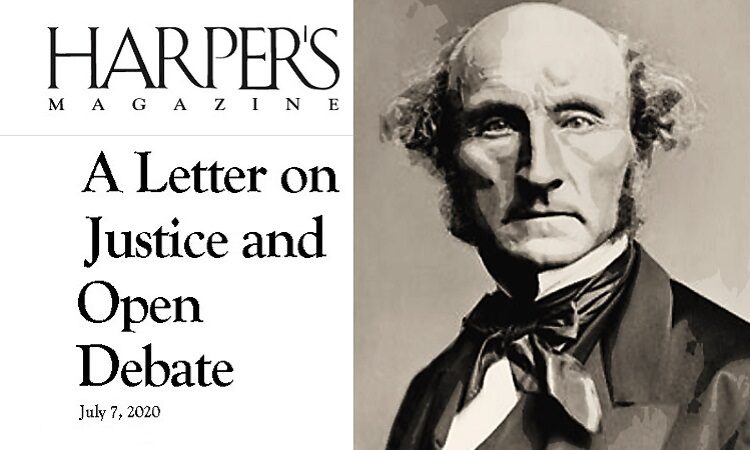 The Letter on Justice and Open Debate published on 7 July 2020 and signed by 150 noted authors, academics, and public intellectuals cuts straight to a key fault line in liberalism. A collection of privileged individuals are claiming an unfettered right to say or write whatever they wish, and they promote this right as the “lifeblood of a liberal society”. If this highly contestable claim is correct, it can then be asked if a liberal society is justifiable.

The Letter is a response to a perception that censoriousness is increasing, and that tolerance is lessening, for those who speak out against “ideological conformity”. The authors “uphold the value of robust and even caustic counter-speech from all quarters”, and are concerned that unpopular views in journalism, literature, academic publishing, and teaching are being subject to ostracism and retribution for “transgressions of speech and thought”. Concerns about their livelihoods is one of the issues raised.

From a different perspective, it is possible to see the Letter as an expression of indulgent preciousness about the dispensations and status to which the authors feel entitled. But more seriously, the claims they make raise important issues regarding the position of elites in liberal society, and the universal application of the right they claim.

The authors’ association of liberalism with unconstrained free speech is obviously simplistic. Freedom in democratic societies has to be limited by the extent to which free action intrudes on the freedom of action of others, or by the nature of the harms actions inflicted. Otherwise society would descend into an anarchic mix of recriminations and retributions. So in reality, there will inevitably be a tension in a democracy between majority norms and individual rights. The untrammelled right the authors’ claim for themselves could therefore only ever be available to an exclusive group in society.

The authors of the Letter confuse, or ignore, a number of aspects of free speech in their argument. There is a very real difference between “good-faith disagreement without dire professional consequences” and speech promoting and fostering hate, violence, racism, and intolerance. Intellectual elites who are comfortably off, in secure employment, or part of the dominant majority might experience free speech as abstract and benign. However, the impact of unrestrained speech is very different for those experiencing oppression and poverty as a result of losing in the opportunity lotteries of genetic inheritance, geographic location, or socio-economic class. Whose right deserves to prevail?

Liberalism and democracy are associated closely in the Letter, but they are not co-dependent. While in practice liberal values like free speech are far less likely to flourish in authoritarian regimes, the record of adherence to liberal values is far from perfect even in democratic states. It is as false a dichotomy to claim that limits on free speech impair democracy, as it is to conflate “justice and freedom”.

Free speech always has been constrained in democracies. Citizens have at various times and places faced sanctions for heresy, religious or political dissent, seditious or treasonous speech, libel, slander, or incitement. As important as free speech is for exposing corruption and injustice and for furthering progress, wellbeing and security, there is a balance that can be hard to find. What has represented an acceptable range of public positions has varied widely over time. Today repression of views advocating extremist political violence is uncontroversial. Moreover, the authors surely couldn’t condone advocacy of slavery, female genital mutilation, pedophilia, or burning of witches, irrespective of how genuinely and deeply the advocates felt on the subjects. Or how much the repugnant views were dressed up as the right to free speech.

Justice is in some ways antithetical to total freedom. Justice is a broad concept and can be approached from a number of directions. The nature of the public discourse impinges on the ability of people to access or experience justice. In a society where rule-of-law is the bedrock principle, governments should strive to ensure fair, easy and affordable access to an objective legal system – but in practice, governments can be swayed by public opinion shaped by elite commentary.

To separate the demagogues and agitators from the righteous creatives who demand “room for experimentation, risk taking, and even mistakes” is impossible. It is not the intellectual provenance of the producer of the words, but the likely impact the words will have on increasing the dispossession, denigration and disempowerment of the already oppressed and disadvantaged, or those facing discrimination, that provides the benchmark.

The words of the elites find their way into the public and political debate and can add credibility and authority to bad actors who promulgate discriminatory policies or virulent views. Ideas, phrases and terms to which the public is exposed can shape views and be adopted, penetrating public discourse. In a democracy, this is not innocuous and can shift public opinion in undesirable ways.

The Letter rails against the “new set of moral attitudes and political commitments that tend to weaken our norms of open debate and toleration of differences in favour of ideological conformity”. The consequence, they argue, is a stifling of work by writers, academics, and public intellectuals who “depart from the consensus, or even lack sufficient zeal in agreement”. This seems to be an overstatement.

Open discussion and debate of important issues is very important to a healthy democracy. But it is not an unbounded right. To seek the removal or suppression of monuments or texts that can be interpreted as celebrating racism or extolling dictators, thereby potentially exacerbating racism, intolerance, or discriminatory practices, is not illiberal. Because of the power of their privileged positions, the authors of the Letter all share an obligation to be conscious of the impact of their writing on others. A responsibility to protect space for the debate on important issues through their restraint. If they don’t accept this responsibility, then restrictions are justified.