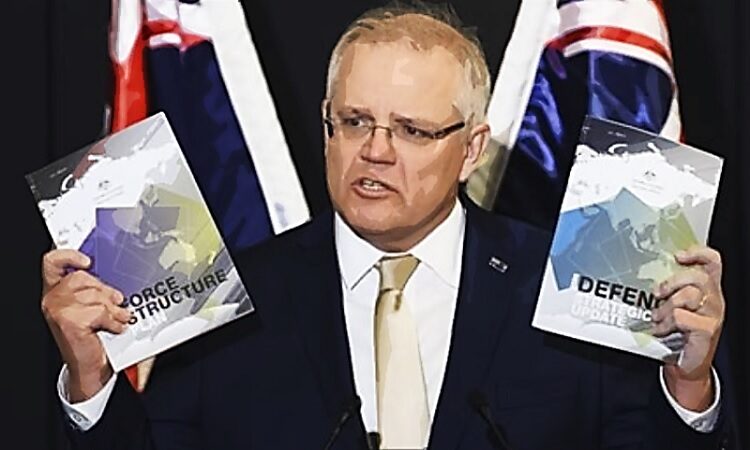 The government is about to invest billions in yet more military hardware. Yet with the rise of “nontraditional threats,” people are actually feeling increasingly insecure.

It is striking that there has been remarkably little debate, despite a history of cost-overruns, lack of accountability, and questions about the actually efficacy of some the proposed expenditures on various weapons systems in the past.

“The Government’s firm commitment to the Australian people remains that we will keep our nation safe and protect our way of life for future generations.” These are the first words in the government’s recently released Strategic Update. To meet this laudable and uncontroversial ambition, the Morrison government is promising to spend $270 billion on defence.

Even if we weren’t facing the prospect of plunging into the greatest economic crisis since the Great Depression, this sort spending and the thinking that underpins it looks highly questionable and unlikely to achieve its central goals. I was about to say “debateable,” but it is striking that there has been remarkably little debate, despite a history of cost-overruns, lack of accountability, and questions about the actually efficacy of some the proposed expenditures on various weapons systems in the past.

More importantly, if the goal really is to keep the nation safe and protect Australia’s way of life, it’s plainly not going to work. Despite a token nod toward the potentially destabilising impact of environmental degradation in the region “in which climate change plays a part,” there is no recognition of the rapidly escalating scale of the ecological crisis we face, which many climate scientists think poses an existential risk to human civilization, if not to the very future of the species.

There is no recognition of the rapidly escalating scale of the ecological crisis we face. Threats… don’t get much bigger than this.

Threats, it would seem, don’t get much bigger than this. Yet the thinking amongst Australian policymakers remains preoccupied with the conventional military variety, which even the proposed increased spending looks unlikely to influence one way or the other. If China is not deterred by the United States, it’s definitely not going to take much notice of Australia no matter how much Australia spends.

Most people understandably find debates about comparative weapons systems and grand strategy a bit arcane and eye glazing. What does get most people’s attention, by contrast, is the prospect of their homes burning down or catching a disease for which there is no cure.

While there is still a debate about the causes and long-term impact of radical environmental transformation—the overwhelming scientific consensus notwithstanding—there is less doubt about the cumulative impact of continuous assaults on our personal sense of security. The reality is that, despite the phenomenal amounts the world collectively spends on “national security,” people seem to feel less safe and confident about the future than ever.

Even before the outbreak of COVID-19, surveys of public sentiment routinely report that a growing number of people feel anxious and depressed. The young in particular are especially worried about their futures, and not just because of their bleak job prospects, important and dispiriting though that is. It’s not possible or fair to dismiss them and their fears as the by-product of over-attentive parenting on the cosseted “snow flake” generation. If I were their age I wouldn’t have much confidence in the future, or the current generation of international leaders to do much to alter it for the better, either.

It is striking that conventional ideas about security invariably have nothing whatsoever to say about the impact of policy on what might be described as the end-users.

It is striking that conventional ideas about security invariably have nothing whatsoever to say about the impact of policy on what might be described as the end-users—more commonly known as the unconsulted, long-suffering taxpayers who ultimately pay for all the new military hardware. Even if you accept the alleged need for such expenditure, the reality is that it is spectacularly failing to make us feel any more secure. On the contrary, the—still remote—possibility that Australia might have to once again do its duty and support the United States in a possible confrontation with China has only added to a sense of instability, if not impending doom.

The psychology of security is a woefully understudied and underrated part of the pursuit of safety. Not only is it painfully apparent than many people, even in the wealthiest and most heavily protected parts of the world, feel chronically insecure. As the opioid epidemic in American attests, some of our leaders are also actively contributing to the problems because of their own psychological shortcomings.

It is striking that the some of the worst responses to the COVID-19 crisis have come from countries led by startlingly ill-qualified, self-obsessed narcissists who suffer from seriously misplaced delusions of grandeur. Donald Trump is the worst and most consequential example of the phenomenon, and Daniel Drezner’s description of him as the “toddler in chief” looks entirely accurate and appropriate.

Whether Australia should be actively supporting an administration led by someone with the emotional intelligence of a 3-year-old is a not unreasonable question to ask—or it is if you’re not part of the security establishment, at least. Perhaps the greatest threat to our collective future is the inability of our policymaking elites to think differently about the very nature of security, the preconditions for its achievement, and to develop adaptation plans for the profound changes the environment is already inflicting upon us.

There are psychological explanations of the resistance to new ideas and empirical realities, too, but I fear they are not widely read in strategic circles. I doubt that the Morrison government— or any other, for that matter—is terribly interested in feedback from the people they claim to be defending. But if they do, here’s mine: if we’re supposed to be feeling more secure as a consequence of the increased defence budget, I’m afraid it’s not having the desired effect. I don’t think I’m the only one, either.

Mark Beeson is professor of Political Science and International Relations at the University of Western Australia.

This article was published here on 31 July 2020 in the Australian Institute of International Affairs magazine Australian Outlook. It is published under a Creative Commons Licence and may be republished with attribution.