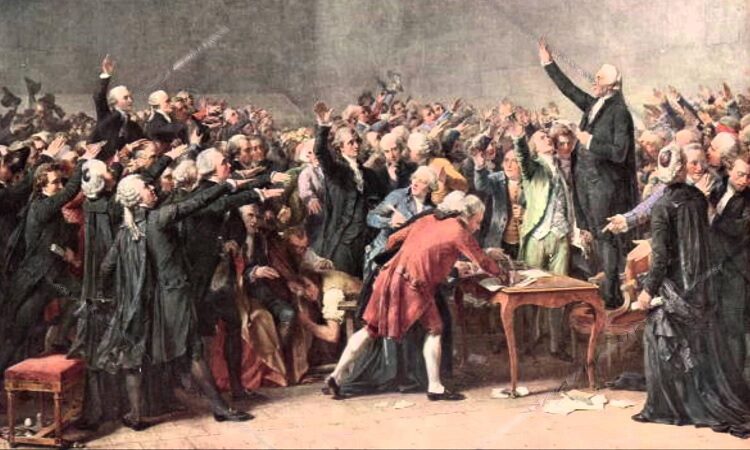 To fully understand the deepening despair of those who look to the political class to address the major problems facing the world—global warming, population growth, wealth inequality, resource depletion, biodiversity collapse, and global instability and their corollaries world hunger, water scarcity, mass migration, conflict, and social upheaval—it is necessary to dip into a bit of philosophy. Neither of the loose ideological gangs that cluster around the flags of the conservative and liberal camps (Right and Left) seem intellectually prepared for the tasks.

The notions of left and right in politics that took shape in France in 1789 are ideas and labels that have escaped their original context. In Modern Moral Philosophy, G.E.M. Anscombe famously articulated a different variant of this problem with respect to ethics. She argued that, as adherence to religion waned and secular values came to predominate, the concepts of moral obligation, moral duty and the moral sense of ‘ought’ had become detached from their theological anchors and needed to be jettisoned. They ‘are survivals, or derivatives from survivals, from an earlier conception of ethics which no longer generally survives, and are only harmful without it’.

There seems little practical utility these days in political parties cementing themselves into ideological corners and asserting their differences in terms which, to appropriate Anscombe, are survivals from an earlier conception of politics. To attempt to approach today’s problems with obsolete conceptual tools puts at grave risk the welfare, well-being, prosperity and security of current and future citizens while endangering democracy.

Conservatism has moved light years from the reactionary feudal-aristocratic supporters of the ancien régime. Conservatism has become associated with values such as justice, order, balance, and moderation and with opposition to rapid or radical changes to the established institutions of society.

In 1957 in “Conservatism as an Ideology“, Samuel Huntington included these predispositions in the shared creed of conservatives: humans are innately religious and religion is the basis of society; existing institutions embody the wisdom of previous generations; prudence, prejudice, experience, and habit are better guides than reason, logic, abstractions, and metaphysics; and, people are unequal and society always includes a variety of classes, orders, and groups.

These predispositions provide explanations for the conservatives’ rejection of climate science and global warming, the obsession with the rights of the religious, prayer and female reproduction, the callousness toward the poor and disadvantaged, the extolling of nationalism and opposition to identity politics and minority rights, and promotion of the dog-eat-dog market competition of neo-liberal economics.

The competing world view to conservatism in most democracies is a version of liberalism.  But liberalism shouldn’t be understood as a tightly coherent and common set of convictions. It is a world view that more often than not shares a commitment to individual rights and an acceptance of diversity, along with confidence in rationality and a scepticism towards given or inherited truths. Predispositions that account in large part for support of social experimentation, multiculturalism, secularism, dissent, redistributive fiscal policies, and faith in science and regulation.

As described these are loose and drifting poles, and few in any political party hold all the mentioned conservative or liberal views. Most politicians cherry pick among them while holding a preponderance of one or the other that directs them to a particular party. It can be argued that what holds these groups together, and what they share in common, is an assumption about history.

R. G. Collingwood noted in The Idea of History that ‘Eschatology is always an intrusive element in history’. For conservatives in general, and this is a broad generalisation, eschatology is the appropriate term.  It is not possible to be an adherent to Christianity without having some ontological commitment to human history as the working out of a divine plan with a predetermined end point.

Even if a non-believer, a conservative is inevitably influenced by a canon that acknowledges the gradual movement of society toward a better place, a progression determined by the accumulation of wisdom drawn from past experience. The liberal has an equal commitment to a better future for human kind, but one grounded in notions of human perfectibility through the application of reason, and political and social manipulation.

The idea of a better, and to various degrees inevitable, future state has been sustained by many major thinkers who have influenced both conservatives and liberals. Often unconsciously, especially perhaps among contemporary politicians, assumptions about the world have been shaped by people they never heard of or never studied.

The argument that there is a direction in universal history, either transcendent or immanent, has been made in Kant’s Idea for a Universal History from a Cosmopolitan Point of View, Herder’s Ideas for a Philosophy of the History of Mankind, Voltaire’s Essay on Universal History, the Manners, and Spirit of Nations, and in the works of Hegel, Marx, Adam Ferguson and Adam Smith, and a host of apologists for European imperialism. It permeated anthropology with the belief in human development through stages from barbarian and savage to civilised. The intellectual sedimentation is deep and thick.

The argument is no longer sustainable. The observable impacts of human activity on the natural world and on society point to a radical break with the past. Any sort of optimism about the future is unwarranted, as is the censurable inaction, complacency and wilful ignorance of the political class. To any clear-eyed observer the current trajectory is taking us to an undesirable place, and reliance on the earlier assumptions of some sort of meaning or progress, transcendental or immanent, unfolding into the future is insupportable. The link between past and future is broken. The world faces a discontinuity.

The task of governments today is to seek the least worst outcome for coming generations. Serious global warming is locked in already and is becoming more grave. Billions more people will be seeking adequate food, shelter, employment and a share of the bounty. Achieving human security will become harder for governments and social upheaval is inevitable. Urgent coordinated, cooperative action is now need to deaccelerate the decline.

To begin requires a reorientation of political perceptions. It is not in prospect.