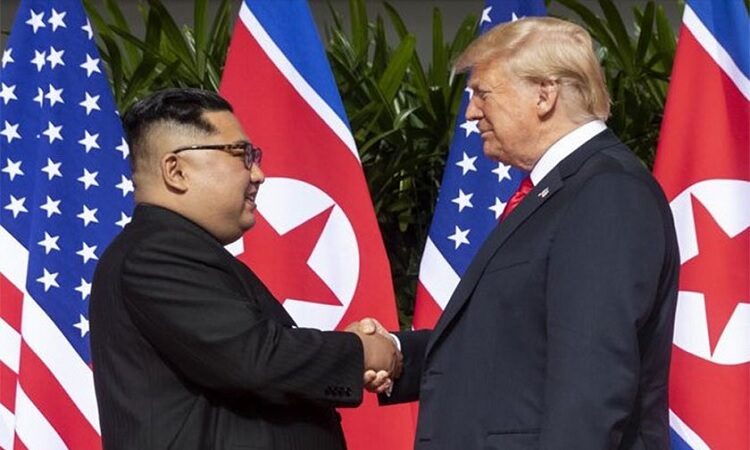 The determination of President Trump’s Administration to fix the Korean Peninsula denuclearisation issue before the upcoming presidential election has apparently faded. Trump is reported to have dismissed the prospect of another summit with Kim Jong-un before the election, and made no mention of the Democractic People’s Republic of Korea (DPRK) in his latest State of the Union address.

The second summit meeting between Trump and Kim Jong-un in Hanoi was abruptly abandoned in February last year. The failure of the Hanoi summit was the culmination of persistent disagreement and misunderstanding in negotiations over the conditions for denuclearisation since the two leaders first met in Singapore eight months earlier. In the period since the Hanoi summit, the gap between the United States and the DPRK on this issue has only widened.

The nuclear threat to North Asia, and possibly the US homeland, will remain one of the most intractable problems for whomever is the successful presidential candidate in the November 2020 election. Kim told the Fifth Plenum of the Korean Workers’ Party’s Central Committee that he considers that the DPRK’s self-imposed moratorium on nuclear and intercontinental and intermediate range ballistic missile tests no longer holds. The Trump Administration’s engagement has to date had no material impact on the threat. The first North Korean missile test for 2020 has already occurred in early March.

The Korean Peninsula’s nuclear problem is just one a number of vexed foreign policy and security issues that have consequences for many states beyond the US. The uncertainty of the outcome of the presidential contest between the Republicans and Democrats, and in the competition for the balance of power in the US Congress, makes crystal-balling difficult. Moreover, the impact of a Democratic win on the US approach toward North Korea will depend on whether a successful candidate comes from the progressive or moderate wings of the party.

The indications are a Democrat victory in the presidential election could lead to a change in direction for US policy. The leading Democratic candidates were asked ‘Would you sign an agreement with North Korea that entailed partial sanctions relief in exchange for some dismantling of its nuclear weapons program, but not full denuclearization?’ as part of a Council on Foreign Relations questionnaire. Bernie Sanders said that at a minimum he would consider sanctions relief as part of an agreement. Biden’s position is unclear.

While sanctions loom as perhaps the biggest point of difference between a potential Democrat president and a re-elected Trump with respect to North Korea, a Democrat president is also certain to place a stronger emphasis on human rights than has the Trump Administration. Another major difference will be the willingness to take a multinational approach. The leading Democrat candidates all signalled including allies and/or other affected states in their approach to North Korea.

It is highly unlikely that in his second term Trump would step back from his maximum pressure sanctions strategy. For a start, other nations subject to the same imposts, like Iran and Venezuela, would be tempted to interpret sanctions concessions toward North Korea as an encouragement to tough it out and remain intransigent. It is also unlikely that he would move away from the approach of personal diplomacy, and the possibility of a ‘great deal’, and involve other nations in a multilateral initiative.

There is no way of telling which of these approaches would produce the desired outcome, if either. Kim seems adamant that North Korea must retain ‘minimum deterrence’ capability, and is therefore unlikely to agree to full denuclearisation even for the lifting of sanctions. Moreover, allowing greater freedom and access to human rights is almost certainly to be considered an anathema that could loosen Kim’s grip on absolute power; it is hard to see Kim accepting demands for domestic reform that would undermine his control. In addition, North Korea has expressed a strong preference for bilateral negotiations with the US, excluding even South Korea, and will be resistant to a multilateral approach. In this regard, both Kim and Trump seem to desire the recognition that comes from summits.

In his report to the Fifth Plenary Kim addressed the DPRK quandary: North Korea ‘cannot give up [its] future security just for visible economic results and happiness and comfort’. Contrary to the ambitions that Trump has for maximum pressure, Kim stressed that if North Korea doesn’t press ahead with economic efforts to strengthen its self-reliance while waiting for the lifting of sanctions, the sanctions will only continue to increase. By generating this response from North Korea, Trump’s sanctions are inevitably counterproductive.

It is possible that, although he derides the current US policy, Kim takes some comfort from the state of US relations with the Republic of Korea. Mike Pompeo and Mark Esper co-authored an op-ed piece in the Wall Street Journal in January, titled ‘South Korea Is an Ally, Not a Dependent’. They emphasised that ‘South Korea can and should contribute more to its defence’. However, the new ‘special measures agreement’ negotiations have been described as ‘a blatant shakedown’. From the perspective of Pompeo and Esper, the presence of the US military on the Peninsula is largely for the benefit of the South Koreans, and serves to maintain a secure environment in which the DPRK’s neighbouring Northeast Asian states prosper due to US munificence.

Kim Jong-un probably has no greater desire for another summit before November 2020 than Trump. Despite the potential for greater pressure for human rights and political reform from a Democrat president, Kim probably calculates that there will be greater opportunities in that outcome for a pragmatic diplomatic solution that ratchets down sanctions in return for progressive DPRK steps to deactivate elements of its nuclear weapons capability. He might hope to reach a point where the North Korean economy receives a boost, while he remains able to claim he can deter threats to the nation. Reaching this equilibrium would only be possible under a Democrat Administration.

The maximum pressure sanctions policy cannot be expected to be any more successful in a second Trump term. Any solution to the North Korea nuclear problem must leave Kim with a basic self-defence capability, that might include some nuclear weapons, and allow him to avoid the ignominy of total capitulation before gaining any relief from sanctions. For North Asian security, the best hope for a partial denuclearisation and a lessening of the security threat probably lies in Trump’s defeat.