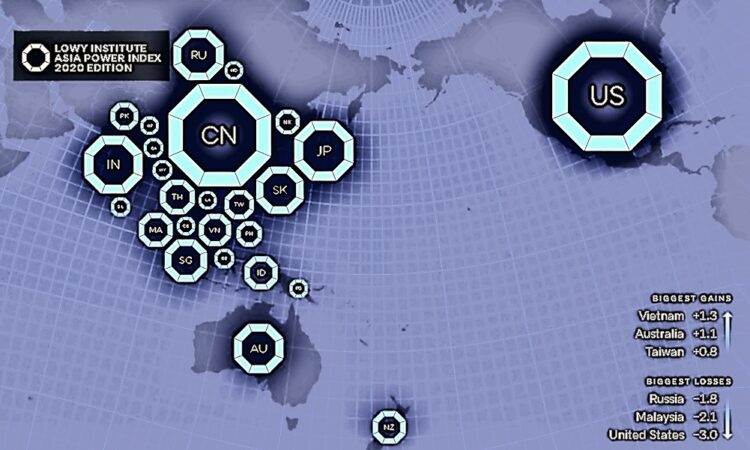 The Lowy Asia Power Index 2020 (pdf opens) is a substantial undertaking. However, a misunderstanding of the concept of power, and some underlying subjectivity and biases, undermines its usefulness. This is illustrated in the measures used concerning technology, military power, and the impact of the pandemic.

The Index purports to map “out the existing distribution of power as it stands today, and tracks shifts in the balance of power over time” by ranking “26 countries and territories in terms of their capacity to shape their external environment”. It measures power through “military capability and defence networks, economic capability and relationships, diplomatic and cultural influence, as well as resilience and future resources”.

In the literature, the “phenomenon of power still is not satisfactory, and much less conclusively, elucidated in its highly complex mechanisms and processes.” The classical realist might see power as “the ability of states to use material resources to get others to do what they otherwise would not.” But identifying when and how a factor might enable the exercise of power is difficult. Power is something that is really only evident when a country tries to force a certain outcome in a particular situation.

Perceptions of power can be as effective in coercing or influencing as the actual exercise of power, but power is always latent, and unrealised and indeterminate, until it is exercised.

Trying to assess potential power has its shortcomings. Perceptions of power can be as effective in coercing or influencing as the actual exercise of power, but power is always latent, and unrealised and indeterminate, until it is exercised. Power is amplified by the ability of the country’s political system to direct, integrate, coordinate and apply the potential elements of national power to an objective. In some domains, and in particular the military domain where readiness and mobilisation are factors, measures of applied power are generally more absolute than comparative; and there tends to be a winner and a loser.

Realised military power is not always a function of the measures addressed by the Index. Historically, the US’s standing on the measures used in the power index would have been immeasurably greater than that of North Vietnam prior to the Vietnam War, and also at the conclusion. However, for many reasons, it did not have the power to achieve its ends in the war. Similarly, the Soviet Union failed in Chechnya and Afghanistan. The value the Index adds to ideas of power in this area is doubtful.

The contribution of technology to perceptions of actual power is another case in point. The stimulus packages that China and the US applied to address the adverse impact of the pandemic on their economies exposed two very different approaches. China applied its stimulus package strategically. China took the opportunity to advance its competitiveness in a range of technologies, with investment in so-called “new infrastructure” associated with smart cities a priority.

China’s progress in the development of fifth-generation (5G) wireless technology, artificial intelligence (AI), power grid cybersecurity, financial technology, biotechnology, surveillance technologies, semiconductors, and space technology is being driven centrally, and with clear national objectives in mind. China’s leadership has embraced the notion of the Fourth Industrial Revolution as the key to its competition with the US. Leveraging the convergence of emerging technology is likely to be a big power multiplier in future.

China is betting on its centrally directed political and economic model to out perform the market driven US alternative, and perhaps with reason. The initial US pandemic stimulus contained income maintenance, unemployment benefits, and support for existing businesses, while the lack of strategic investment in productive infrastructure or emerging technology was conspicuous. The US missed an opportunity to salvage America’s ageing, crumbling infrastructure; an essential factor in building domestic prosperity and national power.

The Index’s authors wished to “sharpen the debate on the geopolitical consequences of the COVID-19 pandemic”. It’s not clear that was achieved. The Index relied on an expert survey to determine perceptions of states handling of the pandemic. The survey apparently concluded “China has emerged diplomatically diminished from the pandemic”, whereas, the US has only suffered “a loss of US prestige” and a “reputational hit”.  Isolating the pandemic management from other social, political and racial upheavals in the US obscures the full reputational damage recently incurred by America.

The view of the general public on this seems at odds with elite opinion, at least compared to the US. In a survey of 14 advanced countries across north America, Europe and Asia Pew found only in the US itself was there a perception the US had done a better job on the pandemic than China. Overall 37% said China had done a good job while only 15% said the US had. The survey was conducted between June and August 2020, and it can be assumed that China’s post-pandemic economic performance and resumption of activity, and the US’s ongoing abysmal response, will magnify the difference. Although, overall negative views of China are rising, but the same applies to America.

A big issue missed in terms of power is the competition of political systems. Across the world confidence in liberal democracy seems to be on the decline and the number of illiberal and authoritarian states growing. This, in the end, might be the biggest factor in power relations, not just in Asia but across the globe.

The measures, assessments and weightings are matters that could be debated forever, and for not much benefit. Of more interest is the existence of the Index itself.

The measures, assessments and weightings are matters that could be debated forever, and for not much benefit. Of more interest is the existence of the Index itself. It doesn’t exhibit any great revelatory power and it’s hard to imagine it being a resource to which policymakers throughout the region will refer. Academics and scholars will seek more nuanced and specific datasets in support of their researches. It’s not likely to hold much interest to the casual reader.

Most reasonably well-informed people, given 26 tiles with the names of the individual countries in the Index, could have compiled a list nearly identical to that published in the Index. Nothing in the Index will produced a sharp intake of breath in the Asian corridors of powers, or exclamations of “How did we miss that!” This enterprise is at least partly funded by the Australian government security agencies. The benefit to taxpayers is not self-evident.