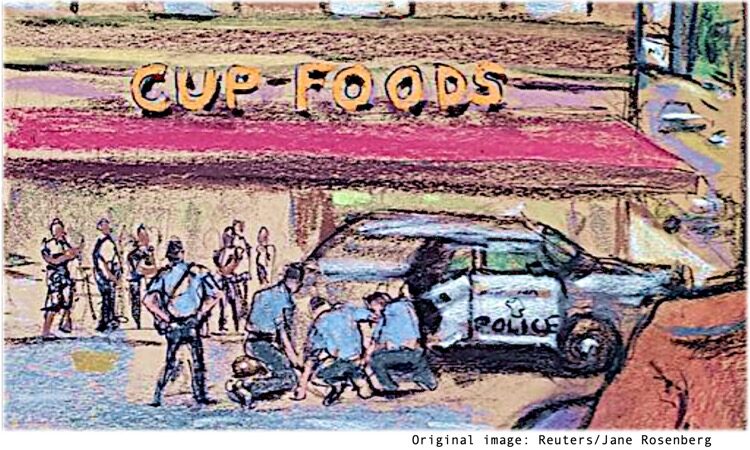 While I think would be a conceit for outsiders to imagine the lives of the residents of George Floyd’s neighbourhood, the trial in Minneapolis does however provide a limited glimpse of a lived experience which, other than for many indigenous citizens, is alien to most Australians.

In The Heart of Darkness, the narrator observes that for Marlow “the meaning of an episode was not inside like a kernel but outside, enveloping the tale which brought it out only as a glow brings out a haze”. The jury will determine the guilt or innocence of Derek Chauvin over George Floyd’s death and his trial will then be over. That tale will then have been told. But the testimony of the witnesses, though, exposes the ongoing and ever present life of a community.

The onlookers testified that they were drawn to the disturbance, and took videos, because they knew something bad would probably happen. A familiar intimation of trouble. A lesson learned over time. Day-to-day experience had given them an intuitive sense that all the elements of a potential tragedy were present. But it wasn’t voyeurism that brought them to the scene. The videos and voice recordings show something else entirely.

The locals seemed to know from experience that individuals, unsupported and unobserved, are vulnerable. Only under the gaze of the local community is there any protection or chance of justice for their fellow citizens. It must be like living with lions. When the patrol cars enter their neighbourhood, prowling on the lookout for those who the authorities deem miscreants and perpetrators, or just undesirables, the lone individual has little chance. The people living in the area know this and it drives a collective response to attend situations where bad things might happen.

Alisha Oyler, the 23 year old cashier from the Speedway convenience store across the road, began recording events from her work place, eventually moving outside and taking seven videos in all. I had to reflect on that. A young woman who was so alert to the signs in her environment that she reacted before anything dramatic had occurred; because life in the neighbourhood had sensitised her to the subtle, small indicators of possible impending trouble.

Sixty-one year old Charles McMillian who was driving by pulled over from the same instinct. He was the first witness onto the scene. This was his neighbourhood and he had to see what was happening. Not because he was nosey. He wanted to give George Floyd some advice based on his personal observations of how best to survive a police interaction, and to attempt moral suasion on Derek Chauvin to mitigate the disaster he could sense was emerging.

He advised Mr Floyd not to resist because once they have you in the squad car the end result is certain. But it was his interaction with the police officer that is telling. Impotent before the officers, Mr McMillian reminded Derek Chauvin that he would be able to go home to his family safe that night and as a human he should want to see the same for others. Confronted by the power of the state, Mr McMillian called on their shared humanity and the moral principles they should all live by. He and his community have little else to fall back on. He cried in the witness box recalling his helplessness to avert the tragedy.

Another compelling example of the camaraderie, mutual care and shared responsibility, grown out of the recognition that they only have each other and that is never enough, comes from Darnella Frazier. Darnella was seventeen at the time she recorded the events. She also showed that preternatural sense that things would go wrong and that all she could do was document the events as they unfolded.

The videos show her providing vocal support to Floyd on the ground and urging the police to pay attention to his condition. She also broke down in tears when asked about how witnessing the event had affected her. She said that every night she apologised “to George Floyd for not doing more.” Frazier, a white teenager, said every time she views the video she thinks of all the black men who could have been in the same situation as Floyd.

There were more witnesses who showed the same sense of community; who saw the situation as familiar, and as one that they had all encountered one way or another in their normal lives. Christopher Martin a cashier at the Cup Foods grocery store, Donald Wynn Williams a mixed martial arts fighter, Genevieve Hansen a Minneapolis firefighter, and a nine year old girl all told of similar reactions. Impotence, frustration, sadness, incomprehension, and resignation, and a deep sense of regret that they could do nothing to stop what was happening.

George Floyd’s death has had an international impact and the vision of him dying shocked people everywhere. Protests were sparked across the world over the disproportionate chances of black people being killed by police. But for the handful of people who gathered on the sidewalk at the corner of Chicago and 38th Streets in Minneapolis on the 25th of May, 2020, it was an event so common that they could see in advance how the course of events would unfold. People brought to the scene by signs that only people familiar with the environment could read, who could taste trouble in the air, and detect an unwelcome change in the atmosphere.

For outsiders this trial is an small insight into the reality of systemic racism. It not only occasionally kills. It is a constant presence. It puts whole communities in a state of perpetual preparedness, where the worst is always to be anticipated, and survival depends on constantly scanning the environment.

The determination of the senior police officials to reform bad behaviour by injecting proactive policies and training into police practises was also clear in their testimony. The results on the street indicate this process still has a long way to go.

The impression given is of a strong community that is accustomed to regular threatening intrusions. Experience seems to have given them a keen awareness of changes in their environment and the realisation that they need to come together and rely on each other. Their constant state is one of alertness, frustration at their impotence, and sadness at their shared  predicament.