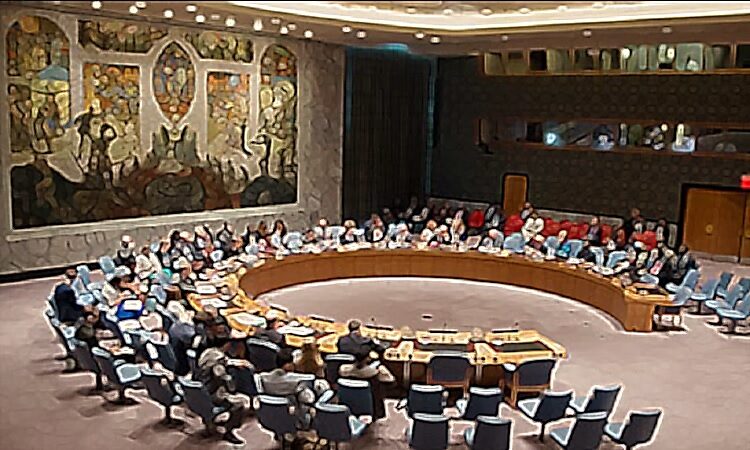 An atmosphere of unreality is building in advance of the virtual meeting of world leaders to mark the 75th anniversary of the United Nations (UN).  Nothing demonstrates this more than the proposed draft declaration. Rather than reaffirming the UN’s centrality, the draft declaration’s faux earnestness jars amid the current international reality. Additionally, it ignores the biggest challenge to multilateralism.

On 21 September 2020, world leaders will gather by video around the surreal theme of ‘The Future We Want, the UN We Need: Reaffirming our Collective Commitment to Multilateralism,’ and endorse a Declaration on the Commemoration of the Seventy-Fifth Anniversary of the United Nations (pdf opens, 601 KB). The subject matter of the declaration is at odds with the rise of autocrats, assaults on multilateralism, demise of human rights regimes, and the ramping up of nationalism across the globe.

The declaration evinces a high standard of bureaucratic drafting skill of the kind seen when it becomes impossible to avoid platitudes. Finding a set of words all nations are comfortable with is always a formidable task. But to those already suffering from poverty, disease, displacement, oppression and conflict and from the increasingly deadly and damaging consequences of global warming, the words of the declaration will ring hollow, even hypocritical.

For example, the signatories will commit to “mobilize resources, strengthen our efforts and show unprecedented political will and leadership”, and “work together with partners to strengthen coordination and global governance for the common good of present and future generations and to realize our shared vision for a common future”. They will declare unambiguously that “Multilateralism is not an option but a necessity as we build back better for a more equal, more resilient, and more sustainable world”. In confronting the crises the world faces, these are things nations have had the opportunity to do, but chose not to.

To believe there is a “shared vision for a common future” is delusional. As is the notion that there is a genuine commitment to multilateralism, or, perhaps more accurately, even a common conception of multilateralism. The alternative models of governance and national values in play cannot be ignored.

Other pronouncements from the declaration also have a false ring, lacking the authenticity they might have had they been matched by the past actions of governments. The world leaders will agree to the need to “immediately curb greenhouse gas emissions and achieve sustainable consumption and production patterns in line with the Paris Agreement and the 2030 Agenda”. They will “support and promote the Secretary-General’s initiative for a global ceasefire”.

Included is the breathtaking announcement that the world leaders will be “guided by the Universal Declaration of Human Rights, international human right treaties and instruments and will ensure everyone’s human rights and fundamental freedoms”. Almost as discordant with reality will be the world leaders’ “call on the Secretary-General to enhance this toolbox to prevent the outbreak, escalation and recurrence of hostilities on land, at sea, in space and in cyberspace”.

The objective observer need only point to the US’s withdrawal from the Paris Climate Agreement, the JCPOA, the World Health Organisation, the UN Human Rights Council, and various arms control measures, to understand the threat to multilateralism. The failure of most nations to meet their Paris Climate Agreement targets, despite dire warnings from science, shows how empty are the words on emissions.

The competition among European and North American powers to sell the arms that fuel wars and sustain authoritarians is at complete odds with support for a “global ceasefire”, and the great power rivalry that is driving an arms race and the militarisation of space and the cyber domain is not going to cease whatever the declaration says.

It’s hard not to see the declaration as an exercise in shameless virtue signalling, at least on the part of the major developed powers. Moreover, while many nations, and especially some Europeans (pdf opens, 765kb) would applaud a commitment from the world leaders “to promote respect for democracy and human rights, to enhance democratic governance and the rule of law by strengthening transparent and accountable governance and independent judicial institutions”, it is clear that many states either don’t operate in accordance with these principles, or understand their meaning in radically different ways. China’s agreement to ensuring “human rights and fundamental freedoms” won’t help the Uighur.

Whatever the words of the declaration meant to the drafters, or how authentic the commitments of the world leaders are, there are differing assumptions behind these principles. Differences in definition that are likely to present a real threat to the longevity of the UN if any real attempt to reform the Security Council (SC) eventuates. The declaration avoids mentioning reform of the SC, the biggest UN elephant in the room.

Among other matters, the SC reform process is considering the issues of enlargement, regional representation, abolition of, or extension of veto power, and the permanent and non-permanent categories of membership. All these issues assume greater gravity today as great power rivalry grows more intense. It is hard to imagine the US, China or Russia surrendering the veto power that has on occasions served all of them so well. Or to agree to a shift in the membership to favour any of the others. Yet without reform of the SC the UN will continued to be paralysed on many fronts.

The attempt in the declaration to ignore, or paper-over, the enormous fissures appearing in the fabric of the world order is so transparent as to be risible. The clear mendacity and lack of authenticity that will be on display when the world leaders sign the declaration can only weaken the UN’s credibility. Some might be persuaded by the declaration to believe there is breath left in multilateralism and the UN’s values, but it’s possible that it’s just a delusion.