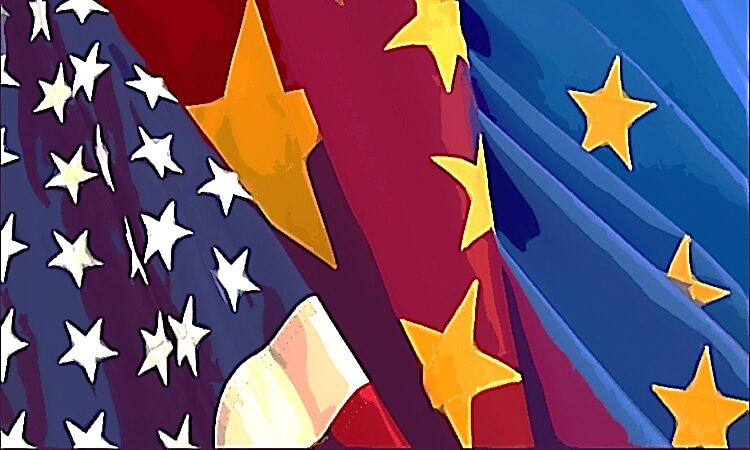 As international relations are increasingly reorganized around the US-China rivalry, the tensions between these two great powers are shaping a growing number of sectors, and the exchange of sensitive technologies in particular. This is a critical issue for European companies today.

Indeed, European companies, as manufacturers, importers and exporters, risk finding themselves at the heart of the deepening technological competition opposing the United States and China (Éric-André Martin).

The United States has a long history of using multiple regulatory instruments in managing the export of dual-use technologies, in particular towards China. Even beyond the Trump administration’s aggressive positions, these regulations are expanding and increasingly strict, hinting at a potential protectionist technological warfare (Pierre Girard).

Despite China’s progress in innovation (5G, artificial intelligence, Internet of Things), and an expansion of measures meant to protect intellectual property rights both for domestic and foreign firms, Beijing’s predatory industrial practices and the weight of the Chinese Communist Party on the economy and society clearly live on (John Seaman).

French and European companies are thus hindered both by the prohibition of re-exporting American technologies and products enacted by Washington and by Beijing’s ‘predatory practices’.

How much leeway do European companies have? What role should the European Union (EU) play in the face of such challenges? Since 2016, new propositions to reform the EU export-control regime regulating dual-use items are being intensely debated (Sofia Bournou).

The three chapters of this report examine the norms currently in place in the United States, China, and Europe, and delve more deeply into specific case studies: the battle between the Trump administration and Huawei (Marion Welles), the problems facing European companies in China (Laurence Nardon and Mathilde Velliet), and the case of the communications satellites (Jean-François Bureau).

The conclusion of this report draws up a list – of great interest for decision-makers – of the infrastructures and technologies that will be critical for European strategic autonomy in the years to come (André Loesekrug-Pietri).

An invaluable introduction to the complex and critical struggle for technological superiority which will the characterise the geopolitical environment for decades to come. This is a race which will have crucial implications for not just military technology but dominance in commercial and trade spaces. This report sets out all the key issues and addresses the question of how the EU could maintain strategic autonomy in the face of this competition between China and the US.

While Australia will be on the sidelines, or at best a small niche player in technological innovation, no country will be able to avoid making technology choices – or to avoid the economic consequences of national security-driven trade and technology transfer policies.

Highly recommended reading in its entirety.