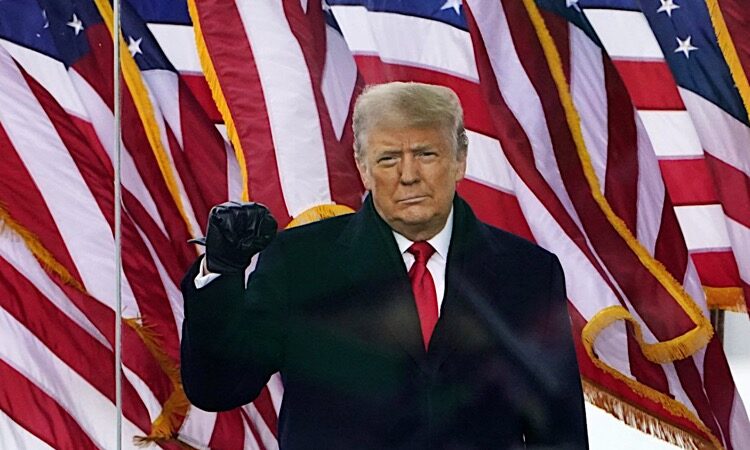 The 1776 Commission Report released on 18 January 2021 is a time bomb of extremist propaganda; a source document for the arguments and recruitment of white nationalists and white supremacists, and for apologists of radical libertarianism.  It will give succour to racists and provide a basis for discrimination against minorities. It will poison minds and inspire violence for a generation.

The ideas put forward in the Report will give shape and logic to the notions of extremists and generate quotes that will resonate on the outer fringes of American politics. Its lasting power to inspire extremists will come from its status as an authoritative product of the Trump Administration.

This is a very dangerous document that provides the façade of a coherent political philosophy to hide, and to disguise, the rising illiberalism in America.

This is a very dangerous document that provides the façade of a coherent political philosophy to hide, and to disguise, the rising illiberalism in America. The Report grossly distorts the narrative of American history. It purports to offer a summary of “the principles of the American founding and how those principles have shaped our country”.

The essay’s ideological nature is apparent early. No mention is made of the native inhabitants of America before 1776, apart from repeating the phrase “the merciless Indian Savage” contained in the Declaration of Independence. It argues that before 1776, “There was not yet, formally speaking, an American people”.  Recognition of the brutal Indian Wars and perfidious dispossession of the Indian nations as a group would contradict the underlying the ideological theme of anti-identity politics.

The Report exculpates the US from its slave owning past, painting it as an aberration rather than a foundational element of the Constitution that had long-term adverse consequences for African Americans.  Slavery is the fundamental conceptual obstacle to the authors’ main thesis, that the Republic’s founders sought “the universal truths of equality, liberty, justice, and government by consent”.

The breathtaking judgement the Report arrives at is that “the movement to abolish slavery that first began in the United States led the way in bringing about the end of legal slavery”. An astounding and ahistorical account of the global struggle for abolition; an account which ignores that even many anti-slavery advocates denied racial equality. However, this important fiction is needed for the essay’s later attacks on “identity politics”.

The Report argues that the founders’ opposition to slavery was based on individual rights, and that it was the denial of this by the slave states that led to the Civil War.  The “attempted substitution of a theory of group rights in [place of individual rights] proved widespread and long-lasting”. A proposition so misleading as to be gobsmacking!

It is the attack on group rights that is the ideological red meat in the essay’s propaganda burger, but the relish contains “the bureaucracy or the administrative state”. A ”shadow government [that] never faces elections and today operates largely without checks and balances”. Trump’s ‘deep state’ is attributed to early twentieth century Progressives, who like the slave states, “rejected the self-evident truth of the Declaration that all men are created equal… with unchanging rights”.

By implication the essay then connects this repudiation of individual universal rights of the Declaration with Fascism and Communism, effectively putting the omnipresent Fascist State and Soviet class war in the same boat with government regulation and group rights that were the concern of the Progressives.

The Civil Rights activism of the 1960s is also seen as being undermined by the failure to adhere strictly to individual rights. “The Civil Rights Movement was almost immediately turned to programs that ran counter to the lofty ideals of the founders” by “the abandonment of non-discrimination and equal opportunity in favor of “group rights””.  The authors detect, “uncanny similarities between 21st century activists of identity politics and 19th century apologists for slavery”; in fact, it is argued, “In the context of American history, the original form of identity politics was used to defend slavery”.

Moreover, the foreign influence of European Marxists like Antonio Gramsci and Herbert Marcuse is invoked to demonstrate that identity politics is un-American.  They are responsible for the ”work of cultural revolution [that] has been going on for decades, and its first political reverberations can be seen in 1960s America”.  The Report identifies a “legacy of anti- Americanism… [that] …still pervades much of academia and the intellectual and cultural spheres”. It sees in American universities “hotbeds of anti-Americanism, libel, and censorship” that generate “at the very least disdain and at worst outright hatred for [America]”.

The final conclusion is chilling, comparing the contemporary situation in America with previous crises that were resolved by violence and insurrection.

The intellectual acrobatics through which the authors go to make a case are breathtaking. The final conclusion is chilling, comparing the contemporary situation in America with previous crises that were resolved by violence and insurrection. The authors believe “This division is severe enough to call to mind the disagreements between the colonists and King George, and those between the Confederate and Union forces in the Civil War.” Not quite a call to arms and insurrection, but close.

In the tumult, drama and disruption of the final month of the Trump Administration, this Report has received fleeting attention before fading out of public view. But it will undoubtedly find sympathetic promoters and readers online. There are already large numbers of people who need little extra encouragement to see this document as confirming their attitudes to race, white supremacy, and government, and who understand its proselytising potential.

An argument from which any serious historian would recoil will nevertheless be seductive to a large rump of Americans who have already proven to be susceptible to a belief in an impending crisis. These Americans might be in retreat now, but they aren’t going away. The United States will need to contend with extremist politics well beyond the Biden Administration. Even in the social media age, where great emphasis is put on combatting online radicalisation, ideas have incendiary power and documents like the Report convey them and keep them alive. This is Trump’s real legacy.