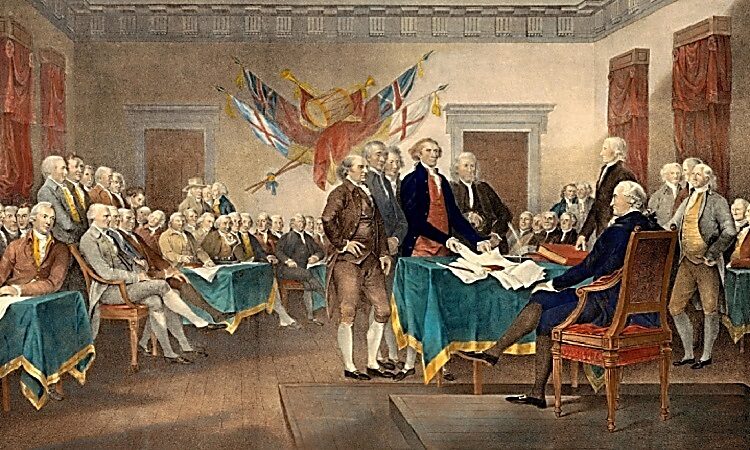 The 1776 Commission proposed by President Trump to counter the New York Times’ 1619 Project and other “narratives about America being pushed by the far left”, is not the equivalent of Australia’s conservative versus liberal history wars. It is about something far more dark.

At the speciously labelled ‘White House Conference on American History’, Trump defended “the legacy of America’s founding, the virtue of America’s heroes, and the nobility of the American character”. He attacked the “twisted web of lies in [America’s] schools and classrooms” pushed by radical-left forces. Declaring the US Constitution in 1787 was “the fulfillment of a thousand years of Western civilization”, he told his audience, it was “the product of centuries of tradition, wisdom, and experience”. He warned of “the left-wing cultural revolution [that] is designed to overthrow the American Revolution”.

In his attack on teaching of history in American schools, Trump singled out Jewish-American historian Howard Zinn, claiming his books made “students ashamed of their own history”. The “narratives about America being pushed by the far-left”, he said, bear “a striking resemblance to the anti-American propaganda of our adversaries — because both groups want to see America weakened, derided, and totally diminished”.

Critical race theory, and the 1619 Project, Trump proclaimed, were “toxic propaganda, ideological poison that, if not removed, will dissolve the civic bonds that tie us together. It will destroy our country”. It is “urgent that [America] finally restore patriotic education to our schools”; education that ensures “[America’s]  youth will be taught to love America with all of their heart and all of their soul”.

It’s clear that Trump’s project is not about history at all. It is a denial of history. It is not about identifying and interpreting historical evidence; the process of posing questions, research, analysis, hypothesis forming, and intellectual debate and scrutiny in an effort to understand the past.

He won’t find works for his new patriotic canon among the scholarly literature. His absurd contention that “America’s founding set in motion the unstoppable chain of events that abolished slavery, secured civil rights, defeated communism and fascism” won’t find any support from legitimate academics. Quite the contrary. But, Trump is unlikely to care as facticity is not his concern.

The most recent works on the history of the South, including slavery, post-Civil War Reconstruction and the Ku Klux Klan, Jim Crow segregation and miscegeny laws, and the civil rights movement would not fit his purpose. Nor would much of the history of the West, especially the Indian Wars and native dispossession, or the popularity of laws banning Chinese and Japanese immigration. Studies of issues like segregation of the armed forces during WW2 or the widespread resort to lynching would be avoided. Certainly works on the US enthusiasm for eugenics in the late-19th and early 20th centuries would be shunned.

The well-documented histories of the Reconstruction, Gilded Age, Progressive, Cold War and post-Cold War periods don’t accord with Trump’s view. Post-war historians have increasingly moved racism, sexism, class, imperialism, and nativism to the centre of the American story, alongside the white male capitalists, soldiers, and politicians. In fact, very little, if any, of the scholarly work written since the Second World War would make Trump’s syllabus.

Trump’s address, however, hits on a number of themes that are not explicit but which are there for those who are predisposed to look for and to find them. Because schools teach American history from a similar set of textbooks, the conspiracy theorists will believe this is evidence of behind the scenes coordination with malign intent by some improbably well-organised, ubiquitous, insidious “left”.

White supremacists will hear words sympathetic to their cause in Trump’s criticism of race studies and his downplaying of slavery’s lasting impact on American society and law. Extreme nationalists will respond to the appeal to “Western Civilization”, and to the proposition that  anyone who doesn’t agree with Trump’s version of patriotism are as good as in league with foreigners and enemies. The call to “restore patriotic education” will appeal to those who feel that the US has fallen from some more glorious past and who seek a restoration. Trump appeals to a minority, but a non-trivial and active one.

In the short-term Trump’s project is about cementing-in the various elements of these core supporters in advance of the election. In the longer term it’s about the future not the past. Trump is surveying the battlefield and planting the landmines for the future struggle, where enemies will be marked by political, racial and class differences, and patriotism is evidenced in a belief in conspiracies, and displayed in repression of dissent. Even if he loses the election, the 1776 Commission is evidence that America will remain deeply and passionately divided beyond Trump’s presidency.

For non-Americans, the 1776 Commission is the denouement of all the bizarre notions that have populated Trump’s seemingly random and disjointed dialogue throughout the four years of his performance as president. His announcement was a not very well-disguised panegyric for a white nationalist agenda that denies systemic racism and vilifies those who pursue truth as unpatriotic. The address cleverly inverts ideas of dissent and free speech to denigrate those who oppose his ideological approach to brainwashing children, and which adopts the mantle of victimhood for the dominant class.

The histories that Trump doesn’t want everyone to read detail why and how the US is different and unique, but not in a way he would appreciate. In fact one such book, How the South Won the Civil War: Oligarchy, Democracy, and the Continuing Fight for the Soul of America (2020) by Heather Cox Richardson, sets out an historical explanation of the phenomenon of Trump and his ideology.

Trump’s defeat won’t stop the struggle for America. History will continue to be a crucial weapon in overcoming the threat his ideas pose.