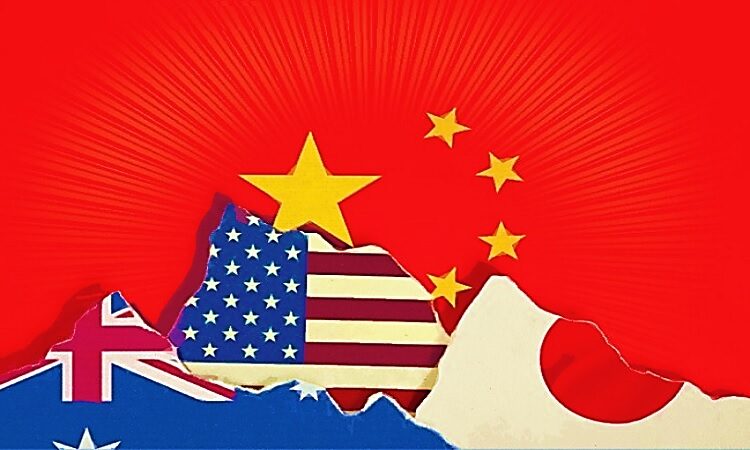 Diplomatic relations have never been worse with China, the destination of half of Australia’s exports.  As China now imposes sanctions on Australian exports, its government ministers refuse to speak to their Australian counterparts.  And as China increasingly emerges as the dominant power in East Asia, the Australian government is siding with the US in the great power struggle underway, even as the US retreats from global leadership.

In his new book, China’s Grand Strategy and Australia’s Future in the New Global Order, Geoff Raby provides hard-hitting analysis and sharp proposals for getting this crucial relationship back on track. Raby has lived in China for some eighteen years, including an assignment as Australia’s ambassador from 2007-11.  The depth of his knowledge of China is evident from the portraits he shares of various episodes over the years.  And his reputation as an aficionado of Chinese art shines through the text, especially in the chapter on soft power.

As many fear an all-powerful China, Raby insists that “China’s grand strategy derives from a position of weakness, not strength.”  It shares borders with fourteen countries, many of which it has been in conflict with.  China is still an empire more than a country, with unresolved internal issues with Xinjiang, Tibet, Taiwan, and Hong Kong.  It is also utterly dependent on international markets and suppliers for energy and other resources which travel through strategic chokepoints like the South China Sea.  In short, China is a “constrained superpower” which has its work cut out in achieving its strategic goals of “regime survival, territorial integrity and recognition of the legitimacy of interests.”

Many concerns have been expressed about the impact of China’s rise on the global and regional orders.  With great nuance, Raby argues convincingly that “China is both a status quo power and a disruptor.”  It does not seek to replace existing global or regional institutions where it sees them serving its interests.  In other instances, China seeks to shape existing institutions to suit its interests.  It has also created new institutions like the Shanghai Cooperation Organisation, Asian Infrastructure Investment Bank, Silk Road Fund, New Development Bank, and others to advance its interests.

Raby also reminds us that “In international relations, the unpleasant reality is that great powers do what they wish and the rest do what they can.”  Many defenders of the existing global order complain about China’s refusal of the jurisdiction of the International Court of Arbitration concerning its activities in the South China Sea.  But the US, the architect of the post-war global order, has never ratified the UN Law of the Sea Convention, and the Trump administration has been openly flouting the rules-based multilateral trading system.

Raby does not see China becoming a regional hegemon in East Asia.  China has to contest with a very powerful Japan and a substantial US presence in the region.  Further, it has no allies and few friends, other than perhaps Pakistan.  Overall, the world has returned to a multipolar order.  And China sits in the middle of a “bounded order” across Eurasia into parts of the Middle East and Africa, and also parts of Southeast Asia and the Pacific.

China has also struggled to build soft power despite spending billions on initiatives like the Confucius Institutes.  Raby notes that “As can be seen from the COVID-19 crisis, while the Party’s narrative might resonate loudly within China, it usually does not work outside of the country.”  Raby recognises that the impact of COVID-19 on the global order is very uncertain.  But he suggests that it is likely to highlight China’s strengths and US’ weaknesses.

Raby is, above all, concerned that in place of the former policy of strategic engagement, Australia is now following the US in adopting a policy of strategic competition with China — driven by Australia’s intelligence, security, and military establishment which has taken control of China policy, while traditional diplomacy has been sidelined.  This is a “strategic miscalculation,” and has seen a deterioration in relations which will impose great economic costs, something which the Australian public has not been prepared for.  Calls for Australia to diversify away from its heavy reliance on the Chinese market fall flat in light of the profound complementarities of the two economies, the sheer size of the Chinese economy, and the absence of any viable alternative market.

Raby is nothing if not a realist.  He argues that Australia’s economic security, and thus national security, is so dependent on China that Australia must learn to navigate a dystopian future with a partner which is “wilful, difficult, abrasive but nonetheless brittle and still weak power, one that is more comfortable with tyranny than democracy.”  But Australia’s foreign and security policies “have been found wanting” in dealing with the rise of China.  High-level official contact with China has been frozen for more than three years, and it took a sharper downturn when the Australian government called for an independent international enquiry into the origins and handling of COVID-19.

In this context, Raby proposes a number of foundations for an Australian grand strategy.  For a country that has in the past relied on great powers for its security, Australia must now recognise that it is “alone in the world.”  The US willingness to defend Australia cannot be taken for granted.  Australia’s best defence begins at home with domestic and foreign policy.

This means that Australia’s foreign policy must once again be “independent.”  Raby recommends increased investment in Australia’s depleted diplomacy, and a sharp increase in Australia’s spending on defence from the current level of two percent of GDP to something like three percent.

Australia must acknowledge China’s legitimacy as the dominant power in East Asia.  Further, it should engage China cooperatively and constructively across the entire spectrum of regional and global concerns and promote richer people-to-people interactions.  Raby is not shy in criticising shibboleths of Australian foreign policy like the  Quadrilateral Security Dialogue (“Quad”) and the Indo-Pacific concept which seek to contain China.

At the same time, to protect and advance its interests, Australia will need to return an activist middle-power diplomacy involving coalition-building across a range of issues.  Indeed, Australia needs to strengthen its bilateral relations across the entire East Asian region, as well as like-minded countries the world over.

As convincing as Raby’s analysis might be, it would be of great interest to hear his views on how other countries have managed their relations with China.  For example, a recent paper from the Center for Strategic and International Studies argues that “Japan aims to balance its deep worries about Beijing with the benefits from having a constructive relationship,” and appears to be quite successful in doing so.

Overall, Raby’s new book is an important work which provides excellent insights and policy recommendations regarding the Australia/China relationship which, as he writes, is crucial for Australia’s economic and national security.

This is a review of Geoff Raby, China’s Grand Strategy and Australia’s Future in the New Global Order (Melbourne University Press, 2020) ISBN: 9780522874945. John West is adjunct professor at Tokyo’s Sophia University and executive director of the Asian Century Institute. His book Asian Century … on a Knife-Edge was reviewed in Australian Outlook.

This article was published here under a Creative Commons licence and may be republished with attribution.