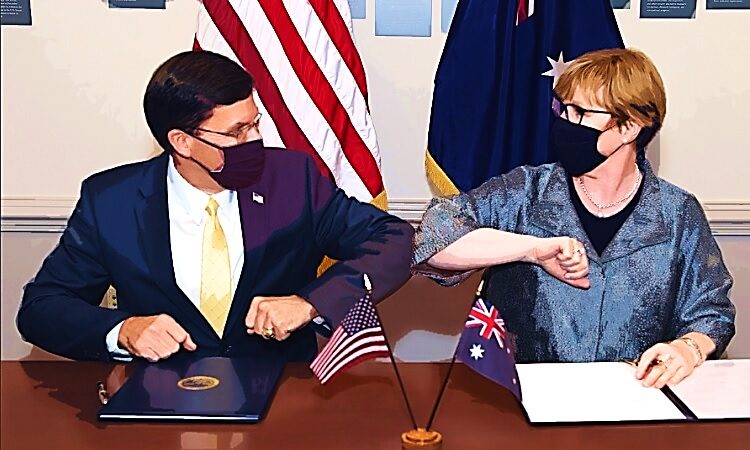 The influence of the US in Eurasia will continue to falter, and as its economic, diplomatic, and moral potency dwindles, America’s military will become its primary asset. In America’s strategic logic, loss of leadership demands a military response.

The US Congress’s oversight of the military is more proactive and far better informed than in Australia. In addition to Congressional Research Service (CRS) reports, Senators and Representatives receive mandatory reports from the Pentagon, and sworn evidence from high-level officers and Defense officials, that provide a greater depth of understanding of military planning. The policy rationale behind budget bids is exposed publicly.

An October 2020 CRS report titled Renewed Great Power Competition: Implications for Defense—Issues for Congress outlines the US’s strategic policy goals and describes the Pentagon’s accelerated force preparations. The report should be of vital interest to Australian parliamentarians and the Australian public. For America it is intolerable that any nation achieves a station where they can thwart the will of the US. The simple prospect of the emergence of a regional hegemon in either the east or west of Eurasia is taken as sufficient cause for war.

The report observes that “a key element of U.S. national strategy” has been “preventing the emergence of regional hegemons in Eurasia” and that “U.S. military operations in recent decades…appear to have been carried out in no small part in support of this goal”. Moreover, this “is a major reason why the U.S. military is structured with force elements that enable it to deploy from the United States, cross broad expanses of ocean and air space, and then conduct sustained, large-scale military operations upon arrival in Eurasia or the waters and airspace surrounding Eurasia”.

According to Robert Kagan, with respect to emerging regional hegemons and the appearance of new spheres of influence, “Despite all of the loose talk of American decline, it is in the military realm where U.S. advantages remain clearest.” The CRS report sees, “the geopolitics of great power competition as a starting point for discussing U.S. defense funding levels, strategy, plans, and programs”. The view of China as an adversary and the idea that renewed great power competition is the dominant character of international relations are now entrenched. A new president is unlikely to be able to halt the enhanced and accelerated preparations being undertaken by the Pentagon for a war with China.

This strategy is driven by the belief that “Eurasia is not dependably self-regulating in terms of preventing the emergence of regional hegemons” and, therefore, “may need assistance from one or more countries outside Eurasia to be able to do this dependably”. America’s strategic policy is based on forcing Asians and Europeans into geostrategic arrangements that suit the interests of the US. The national interest of states in Asia and Europe are subordinate to those of America, and the US is prepared to employ military force to ensure this principle prevails.

The report reveals the urgency and energy with which the US military is preparing to fight China: including the Pentagon’s drive for innovation and speed in weapon system development and deployment, through the Adaptive Acquisition Framework; its focus on mobilization capabilities for extended-length conflict; and its emphasis on supply chain security and “minimization of reliance in U.S. military systems on components, subcomponents, materials, and software from other countries”.  All of these are preparations for conducting “high-end conventional warfare”, that is, “large-scale, high-intensity, technologically sophisticated conventional warfare” against China, or Russia.

These preparations have resulted in new operational concepts for war in East Asia that include Multi-Domain Operations (MDO) for the Army and Air Force, Agile Combat Employment for the Air Force, Distributed Maritime Operations (DMO) for the Navy and Marine Corps, and Littoral Operations in a Contested Environment (LOCE) and Expeditionary Advanced Base Operations (EABO) for the Marine Corps. In contrast to Australia, US legislators and the public have good exposure to the operational justifications that drive investment.

The military preparations for war on a recognised emerging Asia hegemon are well known. The ADF, and therefore the Australian government, undoubtedly will be aware in even more detail of the US’s new operational concepts and how these fit into US war plans in East Asia. Both the 2020 Defence Strategic Update and the 2020 Defence Force Structure Plan seem to confirm this.

The lexicon of military documents has converged and the repetition of phrases does not always imply imitation or influence. However, the concepts informing the Update and the Plan bear a telling correlation with those of the US.  The Update refers to ”state-on-state conflict” and notes Australia “must be better prepared for the prospect of high-intensity conflict”, and in particular, “high-intensity military conflict between the United States and China.”

Congruence can be detected in the need “to accelerate capability development and strengthen supply, as well as selectively increasing interdependence with the United States and other partners in more responsive and assured global supply chains”. Some clarification by the government about the “Experimentation and analysis, conducted in Australia and overseas”, and which “tested both the current force and proposed new capabilities against a broad range of classified scenarios”, referenced in the Plan, would put the Australian public in a comparable position to US citizens.

While the trajectory to war is not irreversible, and the step to launching a war is huge, the consequences would be calamitous. The apparent determination of the US to keep live the military option for retaining its primacy over Eurasia is disturbing, and the Australian government must reveal the level of commitment entered into with the US. Is Australia complicit in the preparations to override the sovereignty of Eurasian states?

China will be aware of America’s hostility to its rise, and the rational for it. Australia’s strategic alignment with the US would be transparent to Chinese observers and will play a concrete, if unstated, negative role in future China-Australia relations. That the US’s ambitions for military hegemony should drive Australian policy would make Australia the first victim in any East Asian war. Its sovereignty diminished, its strategic autonomy lost, just waiting for orders.