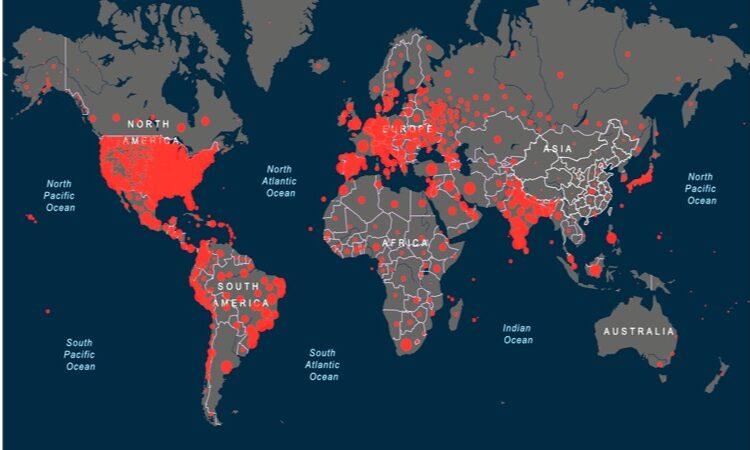 Asia has done a much better job of containing the pandemic. Do values have anything to do with it?

COVID-19 has been ruthless in choosing winners and losers around the world. The obvious “losers” have been those countries led by right-wing nationalists: Brazil, India, Russia, the United Kingdom, and (until recently) the United States. These five countries are responsible for more than half of the world’s coronavirus infections and nearly half the deaths.

Just as obviously, the “winners” have been the countries of Asia. It’s not as if these countries have avoided the various surges that have taken place globally as a result of holiday travel, the loosening of restrictions, or new variants of the disease. But even among the outliers, the renewed outbreaks have been several magnitudes smaller than what Europe or the Americas have faced.

So, perhaps at least some of the fault lies elsewhere: not in our political stars, but in ourselves.

After the Soviet Union collapsed in 1991, the West indulged in more than a little triumphalism. Pundits fell over each other in their eagerness to declare that the individual had prevailed over the collective, capitalism had vanquished communism, and the West was the best (so forget about the rest).

Many people in Asia, however, begged to differ.  Maybe you remember the debate in the 1990s around “Eastern” vs. “Western” values. Singapore leader Lee Kuan Yew and Malaysian Prime Minister Mahathir Mohamad, along with their house intellectuals, claimed that Asian countries had superior value systems than those of the West.

Rather than unstable democracies, disruptive human rights movements, and the overwhelming cult of the individual, the East valued harmony, order, and the common good. These values, they argued, made possible the continuous economic success of the Asian Tigers (Hong Kong, Singapore, South Korea, and Taiwan) not to mention the earlier accomplishments of Japan, the leapfrogging rise of Mainland China, and the copycat efforts of the Tiger Cubs (Indonesia, Malaysia, Thailand, the Philippines, and Vietnam). The proof was in the productivity.

The counter-arguments came quickly from such august figures as Kim Dae Jung of South Korea, Aung San Suu Kyi of Burma, and Amartya Sen of India. They pointed out that there’s nothing inherently Western about human rights and democracy. Both South Korea and Taiwan, after all, democratized without putting a dent in their economic growth. Human rights movements had mass appeal in Burma, the Philippines, and elsewhere in the region. After the Asian financial crisis of 1997, which devastated countries in the region, it became increasingly difficult to argue that the East was immune from the same economic problems that plagued capitalism in the West.

As a result, the “Eastern values” camp gradually faded from view. Good riddance to bad theory. The dividing line between East and West was spurious in so many ways, reminiscent of older stereotypes of the East as “unchanging” or “inscrutable.”

And yet, today, COVID-19 has drawn a clear line between Asia and the rest of the world. What’s particularly striking about this latest divergence is the lack of significance in types of governance. The countries that have been successful in Asia have very different forms of government, from communist (Vietnam) to democratic (Taiwan) to military dictatorship (Thailand). Moreover, they have different histories, religious backgrounds, and relationships with the countries of the West. The only thing they share, it would seem, is what realtors are always going on about: location, location, location.

So, should we be resurrecting “Eastern values” to explain such a startling difference in outcomes during this pandemic era?

The most important reason that Asia reacted to COVID-19 with greater seriousness and better results has to do not with ancient history but with more recent experience.

In 2003, the region was blindsided by the SARS epidemic. The first cases emerged in southern China in late 2002. By March, the new coronavirus was showing up in Hong Kong and Vietnam as well. Eventually it would appear in 29 countries and result in over 700 deaths. By July, after unprecedented international cooperation, the World Health Organization declared the epidemic contained.

Think of SARS as a virus that stimulated Asia’s immunological system. That system went into hyperdrive to fight off the infection. Once Asia successfully beat off the new disease, a certain immunity remained. That immunity was not biological, in the sense that the populations of the region had any resistance to novel coronaviruses. Rather, the immunity consisted of a heightened awareness of the problem, a new set of institutions and practices developed to fight future attacks, and a historical memory among a certain generation of political leadership. The rest of the world, which avoided the brunt of SARS, didn’t develop that kind of immunity.

A second advantage that Asian countries have enjoyed is a coordinated central government response. After its initial denial of COVID-19, Beijing soon switched into high gear to contain the spread of the disease by locking down Wuhan and other hot spots and severely restricting internal travel. South Korea moved rapidly to institute a nationwide testing and tracing system. Taiwan quickly made masks available, imposed an immediate quarantine system, and monitored citizens digitally. Countries in the region with less tightly federated structures – Indonesia, Philippines, Malaysia – weren’t able to react as quickly or as consistently. But even they were models of central authority compared to the kind of policy clash between center and periphery that so complicated the pandemic response in countries like Brazil and the United States.

The third advantage, and this comes the closest to a revival of the “Eastern values” argument, is the issue of compliance.

The U.S. anti-mask mentality, for instance, has no real counterpart in Asia. Sure, plenty of people in the region have issues with their governments and with state regulations. A number of the countries in the region, like South Korea, are notoriously low-trust. But throughout the region, citizens have a greater respect for scientific authority and a greater respect for community standards. And those who for whatever reason choose to flout this authority and these standards are quickly shamed into compliance.

As Lawrence Wright points out in his thorough piece on COVID-19 in The New Yorker, consistent mask use stands out as a determinant of success in containing the spread of the virus. “Hong Kong was one of the world’s densest cities, but there was no community spread of the virus there, because nearly everyone wore masks,” he writes. “Taiwan, which was manufacturing ten million masks per day for a population of twenty-three million, was almost untouched. Both places neighbored China, the epicenter.”

Anti-vaccine sentiment is also quite low in Asia. According to a 2018 survey, 85 percent of people in Asia believe vaccines are safe – the highest of any region in the world. Although anti-vaxxers have managed to spread their messages in Asia, it’s notably been in the two countries with the worst records on COVID-19: the Philippines and Indonesia. Elsewhere, vaccination levels have remained high.

It’s not just deference to science or fear of public shaming. Compliance may also derive from a stronger sense of the common good. It’s not as if harmony prevails over Asia like a benevolent weather front. Look at the political polarization in Thailand that has led to multiple mass demonstrations and military coups. Or the rapid alternation in power of different political parties in Taiwan and South Korea. But underneath the great divisions in these societies is a persistent belief in pulling together during a crisis rather than pulling apart.

It is impossible to imagine a scenario in any Asian country like what transpired in the United States during the January 6 insurrection. Lawmakers evacuated from the congressional floor found themselves packed into a small, windowless lockdown room. If ever there were a time for bipartisanship, it was during this attack on American democracy. Yet, some Republican legislators, although they quite obviously couldn’t maintain social distance in this crowded space, refused to wear the masks offered to them. They couldn’t even pretend to care about the health and safety of others, and several lawmakers indeed tested positive for COVID-19 after this experience. This is the American response to the pandemic writ small: astonishing selfishness and ideological rigidity.

In Asia, it’s very possible that the successful efforts by governments to contain COVID-19 will lead to a virtuous circle of trust, if not in the governments then at least in social institutions like medical authorities, as this recent study from South Korea suggests. The West, meanwhile, is descending into a vicious circle of mistrust that vaccinations, herd immunity, and the exile of Trump to Florida will not be enough to forestall.

Forget about so-called Eastern values for a moment. The West needs to look more carefully at its own values, since they are clearly not fit for purpose at a time of crisis.

John Feffer is the director of Foreign Policy In Focus and the author of The Pandemic Pivot. This is a slightly abbreviated version of an article was published by Foreign Policy in Focus under a Creative Commons licence. Read the full article here.