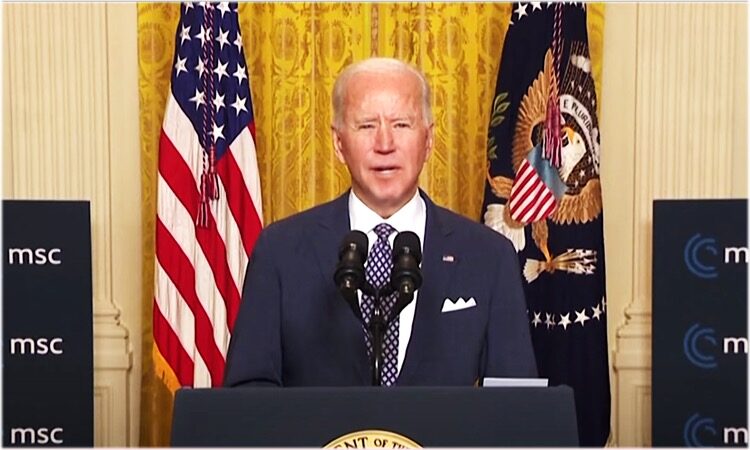 While much of the media commentary has reported favourably on President Biden’s remarks, focusing on a welcome return of the US to multilateralism, some analysts have observed that the positions outlined by President Biden may fail to recognise that there is a now degree of divergence in US and EU interests in some areas, and also to understand that European leaders are cautious about the pervasive division in the United States – and the extent to which this may affect the achievement of common goals and the stability of the US’s foreign policy positions beyond Biden.

Speaking after President Biden, German Chancellor Angela Merkel said that Germany and US interests would “not always converge” but that trans-Atlantic values are fundamentally the same. However, Chancellor Merkel warned that the West and democratic countries would have to actually let actions speak instead of just speaking about their values.

Perhaps the most unusual and wide-ranging critical assessment of President Biden’s remarks h&t has read to date are those of the Australian Broadcasting Corporation’s international affairs analyst, Stan Grant.

With no mentions of Donald Trump, Joe Biden declares the US is ‘back’ on the world stage. But which America? (ABC, 19 February 2021)

What did President Biden say?

For context, the full text of President Biden’s remarks to the Munich Security Conference can be found on the White House website here.

[There is a] dire need to coordinate multilateral action to address COVID-19, the global economic crisis, and the accelerating climate crisis, and so much else.

Achieving these goals is going to depend on a core strategic proposition, and that is: The United States must renew America’s enduring advantages so that we can meet today’s challenges from a position of strength.  That means building back better our economic foundations; reclaiming our place in international institutions; lifting up our values at home, and speaking out to defend them around the world; modernizing our military capabilities while leading with diplomacy; revitalizing America’s network of alliances and partnerships that have made the world safer for all people.

You know, I hope our fellow democracies are going to join us in this vital work.  Our partnerships have endured and grown through the years because they are rooted in the richness of our shared democratic values.  They’re not transactional.  They’re not extractive.  They’re built on a vision of a future where every voice matters, where the rights of all are protected and the rule of law is upheld.

None of us has fully succeeded in this vision.  We continue to work toward it.  And in so many places, including in Europe and the United States, democratic progress is under assault.

We are in the midst of a fundamental debate about the future and direction of our world.  We’re at an inflection point between those who argue that, given all the challenges we face — from the fourth industrial revolution to a global pandemic — that autocracy is the best way forward, they argue, and those who understand that democracy is essential — essential to meeting those challenges.

Historians are going to examine and write about this moment as an inflection point, as I said.  And I believe that — with every ounce of my being — that democracy will and must prevail.  We must demonstrate that democracies can still deliver for our people in this changed world.  That, in my view, is our galvanizing mission.  Democracy doesn’t happen by accident.  We have to defend it, fight for it, strengthen it, renew it.  We have to prove that our model isn’t a relic of our history; it’s the single best way to revitalize the promise of our future.  And if we work together with our democratic partners, with strength and confidence, I know that we’ll meet every challenge and outpace every challenger.

The transatlantic alliance is a strong foundation — the strong foundation — on which our collective security and our shared prosperity are built.  The partnership between Europe and the United States, in my view, is and must remain the cornerstone of all that we hope to accomplish in the 21st century, just as we did in the 20th century.

The United States will work closely with our European Union partners and the capitals across the continent — from Rome to Riga — to meet the range of shared challenges we face. We continue to support the goal of a Europe whole and free and at peace.  The United States is fully committed to our NATO Alliance, and I welcome Europe’s growing investment in the military capabilities that enable our shared defense.

I know the past few years have strained and tested our transatlantic relationship, but the United States is determined — determined to reengage with Europe, to consult with you, to earn back our position of trusted leadership.

You know, we must prepare together for a long-term strategic competition with China.  How the United States, Europe, and Asia work together to secure the peace and defend our shared values and advance our prosperity across the Pacific will be among the most consequential efforts we undertake.  Competition with China is going to be stiff.  That’s what I expect, and that’s what I welcome, because I believe in the global system Europe and the United States, together with our allies in the Indo-Pacific, worked so hard to build over the last 70 years.

We have to push back against the Chinese government’s economic abuses and coercion that undercut the foundations of the international economic system.  Everyone — everyone — must play by the same rules.

Setting of global rules and standards

We must shape the rules that will govern the advance of technology and the norms of behavior in cyberspace, artificial intelligence, biotechnology so that they are used to lift people up, not used to pin them down.  We must stand up for the democratic values that make it possible for us to accomplish any of this, pushing back against those who would monopolize and normalize repression.

You know, this is also — this is also how we’re going to be able to meet the threat from Russia.  The Kremlin attacks our democracies and weaponizes corruption to try to undermine our system of governance.  Russian leaders want people to think that our system is more corrupt or as corrupt as theirs.  But the world knows that isn’t true, including Russians — Russia’s own citizens.

Putin seeks to weaken European — the European project and our NATO Alliance.  He wants to undermine the transatlantic unity and our resolve, because it’s so much easier for the Kremlin to bully and threaten individual states than it is to negotiate with a strong and closely united transatlantic community.

That’s why — that’s why standing up for the sovereignty and territorial integrity of Ukraine remains a vital concern for Europe and the United States.  That’s why addressing recklessness — Russian recklessness and hacking into computer networks, in the United States and across Europe and the world, has become critical to protecting our collective security.  The challenges with Russia may be different than the ones with China, but they’re just as real.

Is it a new cold war?

And it’s not about pitting East against West.  It’s not about we want a conflict.  We want a future where all nations are able to freely determine their own path without a threat of violence or coercion.  We cannot and must not return to the reflexive opposition and rigid blocs of the Cold War.  Competition must not lock out cooperation on issues that affect us all.  For example, we must cooperate if we’re going to defeat COVID-19 everywhere.