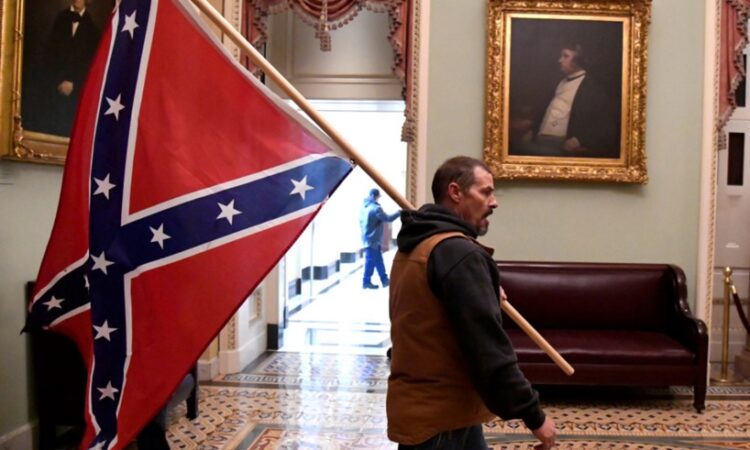 Joe Biden is missing the mark. Democracy is a political process not a moral philosophy, and the big threat in America is to liberalism. In particular, to the tolerance that buttresses liberal values.

The January 6 riot last year was a new manifestation of the ingrained intolerance in American politics that has regularly produced political violence. But now the growth of intolerant and violent illiberalism in the US threatens its domestic concord and could call the utility of Australia’s strategic dependency on America into question.

President Biden has evoked spent myths about an ideal of America that never was. On the anniversary of the assault on the Capitol, Biden asked, “Are we going to be a nation that accepts political violence as a norm?” The answer is yes; America did so a long time ago.

America’s proclivity to resort to violence is stamped indelibly into its history. In 2015 historian Richard Hofstadter observed, “there is far more violence in our national heritage than our proud, sometimes smug, national self-image admits”. He pointed out that there is “in the United States of recent years a magnitude of civil strife that compares very unfavourably with most other nations of a high level of economic development”.

Political violence is not a new phenomenon. As Kellie Carter Jackson notes, “In America, the relationship between Black people and White supremacy is the story of violence”.

Hofstadter pondered how America “combined such a substantial degree of popular domestic violence with such a high degree of political stability”, and observed “the confrontationist politicians” had “learned the value of not committing violence but provoking it”. American political violence has been neither insurrectionist nor anti-democratic, until now.

The founding fathers, Biden declared, wanted to ensure that “power would be transferred peacefully — never at the tip of a spear or the barrel of a gun”.   However, US presidents Lincoln, Garfield, McKinley and Kennedy were all assassinated, and Teddy Roosevelt and Reagan wounded. Assassination attempts misfired against presidents Jackson, F.D. Roosevelt, Nixon, Ford, Carter, Clinton, Obama, and Trump.

Vice-President Kamala Harris’s remarks, however, have pointed to “some radical faction that may be newly resurgent but whose roots run old and deep”, but then veered away from the contemporary implications. More usefully, former secretary of state Madeleine Albright observed after January 6:  “Exacerbating our differences is one road to disaster; denying them is another. Instead of fantasising about a harmony that is out of reach, we should focus on ensuring that our inevitable disagreements lead whenever possible to constructive outcomes”.

Biden’s hackneyed phrases such as “We’re a nation of laws; of order, not chaos; of peace, not violence” ignores the incommensurable and irreconcilable differences on race, class, religion, and political philosophy that have frequently led to violence and lawlessness.

For many Americans there is no place for those who disagree with them; no tolerance for dissent or of the other. Without the abiding principle of tolerance for difference democracy is no better than autocracy in securing liberal values and civil rights. That’s the threat.

The Chicago Project on Security and Threats’ (CPST) research should be of vital interest for two to important reasons. If the Biden Administration doesn’t understand the real domestic threat it is unlikely to address it effectively. If America were to see an illiberal, and potentially violent, administration installed at the next presidential election, or an illiberal majority in Congress this year, there will be significant geopolitical consequences.

This CPST reports that 89 per cent of the Capitol rioters arrested had “no apparent affiliation with any known militant organisation”. Their average age was 40, while 24 per cent were business owners and 28 per cent white collar workers. They originated roughly in equal measure from areas Biden and Donald Trump won in the election.

Additional research by CPST indicates 62 million American voters believe the election was stolen from Trump, and 21 million of those believe violence is justified to restore Trump to the White House. These numbers are not waning. The research points to a new type of political movement in the US.  It reveals a “new kind of a right-wing movement, one that is demographically closer to an average American than an average right-wing extremist and indicating that far right support for political violence is moving into the mainstream”.

The Capitol riot was evidence of “a new force in American politics” which is a “broader mass political movement that has violence at its core”.

If the Biden Administration persists in the twin fallacies that the assault on the Capitol was not evidence of a deep, unbridgeable political divide, and that some historicist “inflection point” between democracy and autocracy is the main geopolitical issue today, they will fail in both arenas.

Biden could be succeeded by a democratically elected illiberal administration beholden to violent and bizarre supporters. Illiberalism is a synonym for intolerance. It will see discrimination against, and restriction and exclusion of, foreigners or aliens, or ethnic or cultural minorities. One groups’ values could be imposed on all, and dissenting religious and political views suppressed. It produces arbitrary power often backed up by state-sanctioned political violence.

Democracy is no defence. We can see this in India, Poland, Brazil, Hungary and Sri Lanka among other democracies; and increasingly in America.

Any future illiberal administration will be unpredictable and globally destabilising. If an abrupt and seismic shift brings about a strange and unfamiliar America, what will that mean for an Australia which has unreservedly cast its lot in with the America it thinks it knows. A deep and radical rethink of Australia’s place in the world would be necessary.

The intensity and extent of the detailed observation and critical analysis of Chinese politics is vitally important for maintaining Australia’s interests. In future, no less vital will be an understanding of where America could be heading and the implications of an illiberal America for Australia.