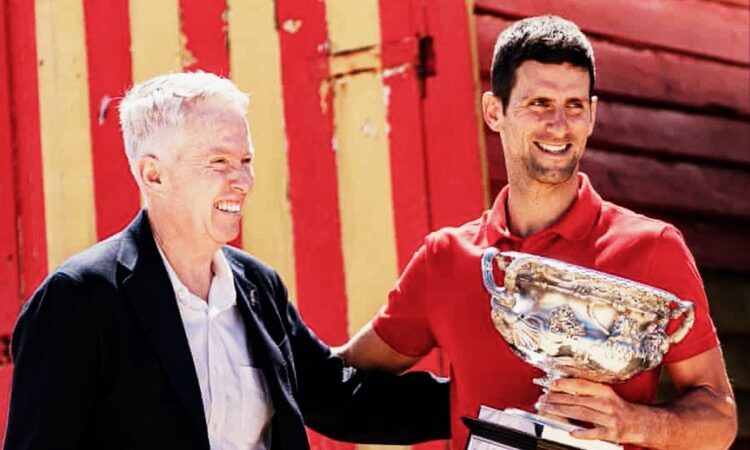 Plenty of parliamentarians, mainly in the government, have made more incendiary statements against Covid vaccination than the tennis star ever did.

Novak Djokovic fits the description of a scapegoat; someone who bears the blame for others, and/or is the object of irrational hostility. Not that his deportation wasn’t legal; the Federal Court unanimously said it was. But the demands of law and justice only partially overlap, and the ethics of Djokovic’s case don’t stand examination.

The Old Testament ritual of loading up a goat with all the sins of the people and expelling it into the desert is not without resonance in the Djokovic saga. But human beings aren’t goats and are, most would agree, entitled to justice.

Of course, ethics and public policy are not close companions, and politics is even more estranged. In Djokovic’s case it seems that he was convicted in the court of public opinion and political expediency, and not at the bar of moral reasoning.

The minister cancelled Djokovic’s visa and deported him “on health and good order grounds”. Not that Djokovic actually had affected health administration or incited public disorder.

The minister’s legal reasoning to the Federal Court argued that that Djokovic: [has] indicated publicly that he is opposed to becoming vaccinated against Covid-19; [he] may encourage others to emulate him by reason of his high profile and status; and, if others were encouraged to take up or maintain resistance to vaccination or to Covid-19 restrictions, then that would present a problem for the health of individuals and the operation of Australia’s hospital system. His passive presence was the potential problem.

Justice is a virtue that should be available to all, and applied equally. Yet, among those Australians of high public profile who have taken far more oppositional stances on the issue of vaccination, Djokovic’s stance doesn’t stand out. Government members, including a former government minister, have made more incendiary and inflammatory remarks. By comparison, Djokovic’s comments are rather mundane and tame.

Addressing her Covid-19 Vaccination Status (Prevention of Discrimination) Bill 2021, Senator Pauline Hanson said “One Nation will not stand by and witness the demise of Australian democracy and freedom without a fight”, declaring she “will fight to the death” for “people’s rights and their freedoms”.  Strong words.
In support of the bill, Senator Matt Canavan said, “rights are being stripped away from us” and it was necessary to “stand up against this tyranny”. He decried “an incredibly authoritarian policy that strips rights off people”, and noted “they will blame the unvaccinated even more”.

Senator Gerard Rennick referred to vaccination as a “cruel, inhumane act”.  The “government overreach of the state premiers in destroying our civil liberties” has gone too far, he said, and “This is no longer about health but is rather about politicians wielding power for the sake of power”.

The Prime Minister brushed off these comments, explaining that the Liberal and National parties are “not run as an autocracy”. “We don’t take people out of our party if we happen to disagree on an issue they feel strongly,” he told reporters.  This, despite the comments being seen by some a dog whistle to those inclined to incite public disturbances.

Other government and former government members have been even more reckless in their comments and more strident in their opposition to vaccinations. Nationals MP George Christensen claimed empirical evidence demonstrated that, “the vaccines are less effective against Delta, and … particularly less effective in reducing transmission”. He urged workers to seek legal advice on their “rights, not to be vaccinated”, and compared “mandatory vaccines with “apartheid” and “slavery”. Christensen has likened “state and territory Covid-19 restrictions to the despotic regimes of Nazi Germany and Cambodia”, calling for civil disobedience as a response.

The Deputy Prime Minister said of Christensen’s remarks, “He is a free individual, he can say what he likes.”

As The Age editorialised about Christensen and, fellow anti-vaccination agitator and ivermectin and hydroxychloroquine advocate, Craig Kelly, “their views are a threat to the health of Australians”. They are described as “doing all they can to spread doubt about Australia’s world-leading efforts to control the disease”. The editorial criticised the government for not reining them in strongly.
It needs to be recalled Djokovic said nothing supporting anti-vaccination activists or to incite disorder while in Australia.

Had Djokovic been denied entry immediately on arrival for not conforming to the regulations there would be little to say about justice. There are rules that apply to everyone and providing they are applied efficiently without discrimination there can be no complaint. Once he was legally in the country, as Djokovic was following the original hearing, it was manifestly unjust for the government to apply a different standard than it applies to its members.The grounds on which the minister cancelled Djokovic’s visa appear confected. His motivation cannot be known, but it’s not inconceivable that a government heading into an election might be affected by polls showing a majority of Australians thought Djokovic should be deported. Border Force many have felt some institutional umbrage from their bungled attempt to deny him entry, and shown some spite.

It is bizarre to suggest that Djokovic’s mere presence was more likely to incite public disorder or to exacerbate anti-vaccination resistance than the far more provocative avalanche of statements made by government members and senators throughout the pandemic. It would be an odd proposition to suggest a tennis player has more influence than elected representatives in a democracy.

Moreover, in a nearly fully vaccinated nation where Covid is already rampant, a non-activist tennis player was not deported for inspiring public unrest or adding to the already faltering health system.
Djokovic might have got the law, but he didn’t get justice.

The Minister’s argument exposes a far more disturbing truth. There is hierarchy of those who are permitted to hold controversial views. It is, therefore, open to the government to eject people from the country who “may” potentially inspire positions unacceptable to the government, even if no wrong has been committed.
Who might this arbitrary censorship power fall on next; environmentalists, climate activists, peace advocates, or social justice promoters?