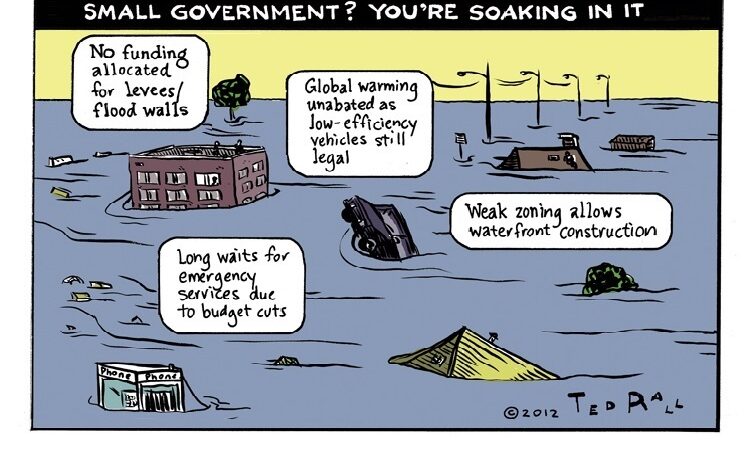 The current crisis tells us some important things. The flaws in the neo-liberal model have been exposed. Democratic politics have been stressed to breaking point. The shocks to the economic, social and fiscal systems required to avoid dangerous climate change are shown to be unfeasible.

The artefacts of neo-liberal economics—globalised production, transnational supply chains, international finance, the erosion of the welfare state, and the abandonment of responsibility to the faceless market by governments—have produced a world not-fit-for-purpose in a crisis.

While it is difficult to see an inflection point during a crisis, missing that moment is potentially catastrophic. To subsequently persist with former paradigms when the world has shifted is folly. The artefacts of neo-liberal economics—globalised production, transnational supply chains, international finance, the erosion of the welfare state, and the abandonment of responsibility to the faceless market by governments—have produced a world not-fit-for-purpose in a crisis.

The neo-liberal jewels of small government, outsourcing and privatisation have proven to be ideological trinkets

The neo-liberal jewels of small government, outsourcing and privatisation have proven to be ideological trinkets, as now governments move to forcefully direct the activities of the private sector in the face of COVID-19. Governments worshipping at the gilded altars of macro-economic aggregates, balanced budgets, and credit agency ratings, have substituted the neo-liberal creed for their obligations to the people. Austerity and obsession with fiscal discipline have made communities vulnerable to the contagion.

Democracy has always been premised on opposition, disagreement, dissent and difference. Were there just one obvious interpretation of the facts, one true universal set of values, one agreed metaphysical order, and one understanding of justice, then the particular political system wouldn’t matter much. Democracy, in the absence of consensus, is in theory a mechanism for finding a resolution over differences about policies and directions with which at least most people might concur.

The virus has shown that decade upon decade of politicians taking the I’m-right-and-you’re-not approach to democracy, where compromise and conciliation are synonyms for weakness, and aggravating differences is a fruitful electoral tactic, has weakened the fabric of society. In these grave times, democratic governments have struggled to leave ideological biases behind, and leaders have proven unable to galvanise the populace behind them in a concerted effort.

The already seriously eroded trust in democratic politicians and democratic institutions, is being further abraded through the widespread lack of preparedness for the pandemic.  The desultory initial performances, the mixed and confusing messaging, the shifting strategies, and the inability of some to ignore the potential for political gain, have increased disenchantment.

During this period of lock-down, self-isolation, social-distancing, and commercial and industrial dormancy, it has been observed that the skies over the cities are clearer and the discharge of greenhouse gases into the atmosphere greatly inhibited. The price for achieving these things in the shorter term is proving high and the measures responsible are imposing on whole societies costs which cannot be borne for long.

But this is the outcome that is needed on a sustained basis if a limit of 1.5°C of global warming is to be achieved; and it’s needed now. The extraordinary steps imposed to fight the pandemic are what’s required. However, the consequences for individuals throughout society, and the collective negative impacts on employment, standards of living, and viability of communities, that arise show that drastic transformations are not sustainable for long periods. The risks of social disruption and social breakdown are real, as are the chances of economic collapse. If this level of reduction in activity is maintained for any continuous period, serious hardship would result for large numbers of citizens and their families. It is an impossible ask.

Denial, delay, and deflection over the climate science by democratic governments immersed in neo-liberal fantasies has set the world an unachievable target if dangerous global warming is to be avoided. When the IPCC and the UN put forward the numbers to illustrate the size of the mitigation and adaptation tasks, it is difficult to conjure up a picture of the scale of the associated disruption. COVID-19 has given the world an insight into the pain involved.

There are big differences between the current crisis and global warming. The timing and extent of the COVID-19 pandemic was not predictable, although experts had been warning of the inevitability of some sort of pandemic for years. Moreover, the pandemic will wane and the crisis dissipate, either of its own accord or because of a vaccine. However, the shape of the global warming crisis and the dire consequences of inaction are becoming more and more distinct and certain, and the hotter world will last for a very long time.

The COVID-19 crisis is still upon us and the world is rightly occupied with surviving and coming out the other side. The whole of the resources of governments need to be applied to the immensely difficult tasks of maximising the number of lives that can be saved and then restoring some semblance of the pre-existing social and economic situation so that people can resume their lives. There will be a lot of human, physical and institutional damage that requires repairing.  But we cannot miss an opportunity and complacently default to the former arrangements.

As soon as practicable, democratic governments need to take stock of the experiences undergone in the pandemic and draw out the bigger lessons. They need to plan for the disruptive transition that must take place in the next decade. Neo-liberal dicta must be dispensed with and strong government leadership restored.

Democratic governments must be transparent and direct with their electorates, informing them of the scope of the challenges. Governments must actively build the knowledge base in the community in order to encourage the consensus, unity and cooperation required. They will need to be better prepared than for the pandemic.

If COVID-19 wakes up political leaders to the need to prepare, plan and act on the coming global warming crises, then some good might come from it after all.

They must employ their influence and their wealth internationally to ignite genuine world-wide action. They must redirect, and reprioritise, government investment away from an arms race into mitigation of emissions, and more urgently, adaptation projects.

Like the virus, the rate of global warming needs to be slowed and the vulnerable protected. If COVID-19 wakes up political leaders to the need to prepare, plan and act on the coming global warming crises, then some good might come from it after all.