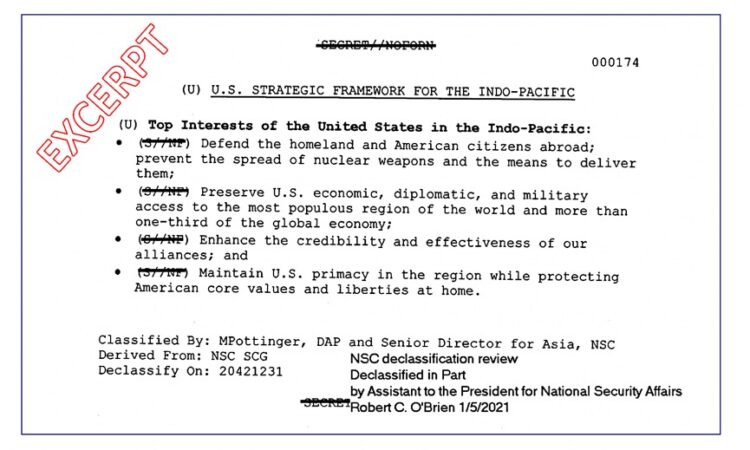 On 12 January 2021, the then US National Security Advisor, Robert O’Brien, released a declassified document titled the United States Strategic Framework for the Indo-Pacific. The document was declassified for release on 5 January 2021, thirty years before this was due, in the last days of the outgoing Trump Administration. What should an Australian analyst make of this document?

A cynical intelligence analyst might harbour some niggling reservations about the provenance or status of the declassified Framework. She might urge some caution about the weight accorded to it and express some surprise at the uncritical acceptance it received in some quarters. This unusual event, she might point out, is after all a Trump Administration release, and note that the timing of the release is odd.

Her experience with documents of this nature might have led her to expect that one purporting to be a seminal policy statement, one setting out the way forward for the most powerful nation on Earth for its contest with its only near peer competitor, might have in it more substantial analysis. Its breathless reception as “one of [the Trump Administration’s] most sensitive national security documents” would have surprised the analyst. As would the assertion that “Geopolitical observers worldwide, from diplomats to intelligence analysts, politicians to businesspeople, journalists to scholars, will find much else to unpack and interpret”.

Despite being described as bringing “an authoritative clarity to the public record”, the paper looks more like what could be a National Security Council policy paper summary, or a briefing note, for a transactional president with a short attention span. The White House statement accompanying the release of the Framework (pdf opens) did not specifically indicate the document was reviewed or endorsed by the National Security Council.

It is a curious document in other ways. Dated February 2018, it comes two months after the publication of the Trump Administration’s more comprehensive 2017 National Security Strategy (NSS). However, there is nothing in the Framework that was not in the NSS or in public documents like the Congressional Research Service series or a raft of other official public documents published since.

The classification level of SECRET, therefore, seems excessive given the contents. If the document contained anything new or revelatory, it does not remain in the unredacted version. The NSS had already said the US will maintain our strong ties with Taiwan in accordance with our “One China” policy”. It announced that the US “will expand our defence and security cooperation with India”, and in particular “support its leadership role in Indian Ocean security and throughout the broader region”.

The NSS set out the intent to “re-energize our alliances with the Philippines and Thailand and strengthen our partnerships with Singapore, Vietnam, Indonesia, Malaysia, and others to help them become cooperative maritime partners” and push the Association of Southeast Asian Nations (ASEAN) and Asia-Pacific Economic Cooperation (APEC) to be “centerpieces of the Indo-Pacific’s regional architecture and platforms for promoting an order based on freedom”. Similarly the NSS had already applauded and indicated support for the “strong leadership role of our critical ally, Japan”, and signalled increased “quadrilateral cooperation with Japan, Australia, and India”.

The intelligence analyst might also be surprised at the clumsy drafting and imprecise language given the importance assigned to the document. It is not clear what is meant by “the acute present danger and the potential for future changes in the level and type of threat posed by North Korea”. Or why a sentence like “Maintain U.S. primacy in the region while protecting American core values and liberties at home” appears in a strategic policy document.

Drafting her initial assessment, the intelligence analyst will be cautious and tentative. Possible conclusions are that the document might:

However, while Framework is curious, she would be firm in her conviction that there was little intrinsic geopolitical or strategic value or interest to be found in it.