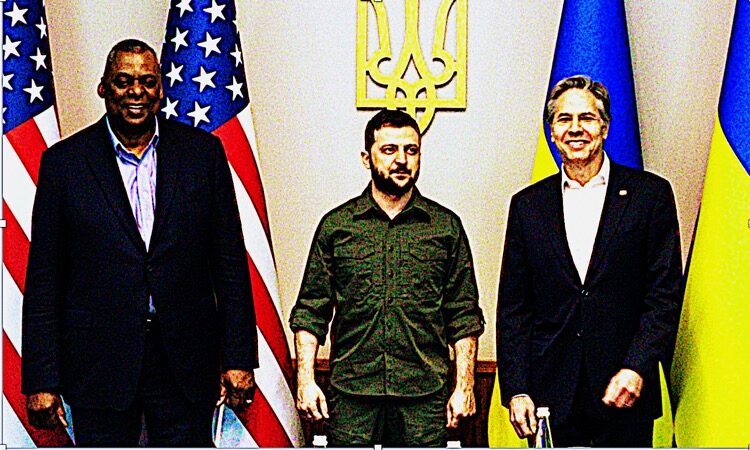 Amongst the headline grabbing events and the geopolitical speculations of the Ukrainian tragedy the ethical rights and wrongs of the conflict are largely ignored. For his criminal invasion, Putin rightly bears the greatest moral and legal opprobrium for the appalling death toll, atrocities, and widespread levelling of parts of eastern Ukraine. But once the war reaches its conclusion, retrospectively the contribution of others will come under closer scrutiny.

There is no doubt that the Russian invasion was in contravention of the most grave international legal prohibition to come out of the Second World War. The legal norms on aggression were set down in UN General Assembly resolution 3314. Invasion of a State by the armed forces of another State, with or without occupation of the territory, heads the resolution’s list of aggressive acts. Russia’s actions are unambiguously consistent with the crime of aggression. This is the most grievous of all the wrong doings.

As war leader, President Zelenskyy has two crucial tasks; to rally the troops and inspire optimal patriotic zeal, and simultaneously present the war as one in which nations that can provide critical aid and support to Ukraine have an existential stake. He has been extremely successful in both.

Zelenskyy and the Ukrainians have displayed the virtues of valour and endurance, but this hasn’t prevented the cost of Ukraine’s resistance inexorably mounting in terms of casualties, destruction, depopulation, and displacement across wide areas of the east. As the conflict continues the loss of human life, territory, and costs of recovery will only grow.

Is there a point at which either or both Ukraine and its allies should question the rightness of sacrificing more and more people and resources in a war that can only result in a nation which is further diminished? Is there a moral imperative that requires that Ukraine be a sacrificial offering to the principle of sovereignty? The American position seems to be in the affirmative.

The fuel the Ukrainian forces run on is primarily American supplied weapons and munitions, as well as intelligence and other military support. Despite the battle smarts of the Ukrainians, without this aid, though, the war would end. The Biden Administration’s calculus is a cold one. There is only one explanation for prolonging the war. That is not the safety and security of the Ukrainians who are directly suffering the dreadful consequences of the conflict, nor the security of the European NATO members to which Russia poses no immediate or medium term military threat.

While in Ukraine and in the company of the Secretary of State Blinken, US Secretary of Defense Austin appeared to confirm that the Administration’s objective was “to see Russia weakened to the point where it can’t do things like invade Ukraine“. Despite the facts on the ground, Austin added the Administration wants “to see Ukraine remain a sovereign country, a democratic country able to protect its sovereign territory”.

The American purpose appears to be geopolitical; to utilise Ukraine as an expendable proxy to degrade and isolate a great power rival. The continuation of the fight suits Biden’s global strategy, as Austin said, the Americans were prepared for “redoubling … efforts to strengthen Ukraine’s military for the long haul”. The moral basis of such a policy is prima facie abhorrent.

The cynical exploitation of Zelenskyy’s patriotism by encouraging him to continue the struggle, and provision of the wherewithal to do so, knowing that Ukraine will take a long time, if ever, to recover from an extended conflict, is deeply unethical. America didn’t create the crisis but is nevertheless using the opportunity created by Zelenskyy’s almost impossible situation for its own benefit.

Urging Zelenskyy with assurances of Ukraine’s eventual victory, when recovery of the Russian held territories in the east or the south seems unrealistic, and in the attempt squandering Ukrainian lives, is wrong. A strong pragmatic and ethical argument can be made that the Ukraine’s interests now lie in the cessation of hostilities and a negotiated peace.

Zelenskyy’s argument that Ukraine is fighting a war on behalf of the rest of Europe, and his condemnation of European states in particular for not being prepared to absorb huge costs in order to help defeat Russia, also raises ethical issues. He has put this as a moral failing on the part of Europe’s leaders. It is not clear, however, what sort of legal or ethical obligations the Europeans have to Ukraine.

There is much virtue in NATO’s refusal to risk outright war with Russia by enforcing a no-fly zone that would have inevitably led to clashes with Russian forces and the initiation of a far more devastating conflagration. Europe’s reluctance to accept enormous economic consequences by abruptly severing Russia gas and oil supplies, perhaps plunging millions of Europeans into poverty and unemployment, has been regularly depicted by Zelenskyy as a moral failure. However, in their actions democratic government’s must always weigh the consequences for their own citizens. Acts that produce greater harm without the reasonable expectation that conditions would be improved either in Europe or Ukraine are ethically dubious. Zelenskyy’s criticisms are understandable but unfair.

The criticality of the survival of Ukraine’s sovereignty and integrity to European security is debatable, and future historians will be challenged to evaluate the charges of selfishness by Zelenskyy in light of the security risks Europeans believed they might run by economically weakening the European Union. Valour can end in Pyrrhic victories or catastrophic defeats. Zelenskyy himself will be judged for the consequences of his decisions to fight to the end, to arm civilians to fight trained military forces, and for allowing Ukraine to be used by outside powers for their own reasons. The Ukrainian president’s courage needs to make way for prudence at some point and the future prospects of his people placed at the centre of his deliberations.

War is not fair and peace settlements are rarely satisfactory to both sides. War is a stranger to both justice and ethics. But some obligation must be owed by all to limiting the human and economic costs.

This article was updated on 10 June 2022 to correct the wording of a quote attributed to Lloyd Austin.