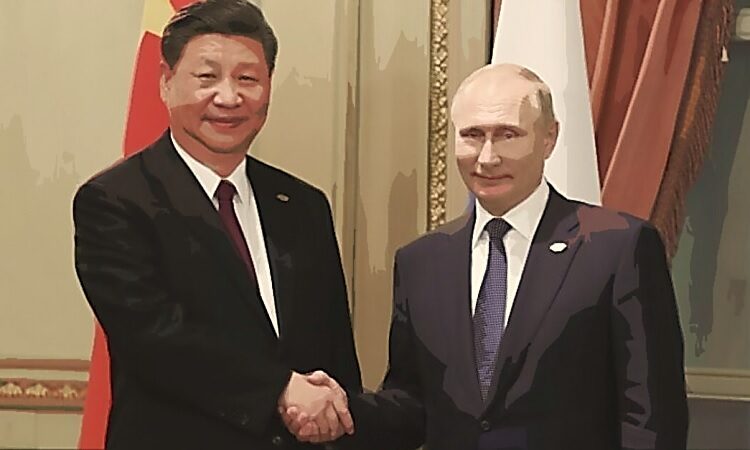 In an article in The Conversation, Professor Alexey Muraviev has pointed out that Australia has failed to factor into its strategic calculations the relationship between China and Russia. While Russia poses no credible direct threat to Australia, it could be a key player in a conflict between the US and China.

Cooperation in all spheres between China and Russia, and particularly over military and security matters, is growing. In any conflict in East Asia it might not just be China facing the US and its allies, but the two Eurasian powers. The proximity and size of China, and the belligerence of the US toward China, has occluded the view of Russia among Australia strategic planners.

For foreign policy and economic analysts, as well as historians, there are deep complexities to, and inherent obstacles in the way of, China and Russia forming a close, intimate and trusting relationship. Although, as their strategic situations become more complex, these constraints seem less problematic. In terms of strategic policy there are complementary factors as well.

Being declared strategic competitors and adversaries of the US, which sees them as revisionist powers threatening American hegemony, gives them a mutual enemy. For Russia, as the successor state of the USSR, the confrontation with the US comes with a nuclear dimension. Maintaining the second strike capability of the  legacy Soviet nuclear arsenal, the capability to launch a retaliatory nuclear strike following an America attack, is a strong deterrent. It provides Russia, and perhaps indirectly China, a guarantee of strategic stability in the nuclear realm. Closeness to Russia might even bring China under an undeclared Russian nuclear umbrella.

Alone, neither Russia or China could confidently challenge the US. For each the survival of the other is strategically crucial. Russia could not look favourably on the destruction of China, or the appearance of a pro-US regime, on its shared 3000 kilometre border with China. In fact, strategic logic points to neither Russia or China being willing to tolerate the other becoming a threat, and this in itself gives them a strong common interest.

As Eurasian land powers, Russia and China share other strategic interests that they might consider employing military force jointly or cooperatively to secure. One important emerging area where their interests are converging is the Arctic. Russia sees great potential benefit for itself deriving from increased shipping through an ice-free Arctic Sea from Asia to the European markets, as well as an opportunity to exploit its abundant natural resources.

China’s trade to Europe and access to Middle East hydrocarbons is potentially subject to interdiction in the Malacca Straits and the Suez canal. A secure Arctic route to Europe is therefore of increasing importance. Russia’s capacity to protect Chinese shipping in the Arctic in a crisis could prove decisive.

China’s other insurance policy against US blockage of choke points, the overland element of the Belt and Road Initiative (BRI), runs through Russia’s sphere of influence before reaching Europe. It would be decidedly in China’s interests if it could rely on Russian forces to protect this vital infrastructure.

Were a conflict with the US in East Asia to become increasingly probable, China’s relationship with Russia would become even more important. A simultaneous show of force by Russia in Eastern Europe, for example by marshalling forces along Russia’s western border or intrusions into Ukraine, Belarus, the Baltics, or Georgia, could force America to split its forces, and keep NATO allies in Europe.

In the case of a hot war in Eastern Europe where Russia faced-off against NATO forces, China could provide Russia with strategic depth and a secure rear area, and access to resupply from China’s vast military-industrial base. Conversely, Russia provides China with similar strategic depth and a secure rear. In addition, Russia’s hydrocarbons could support Chinese operations almost indefinitely. China could force the US to split its forces by threatening Taiwan.

Forming new firm, long-term alliance commitments such as those that marked NATO and the Warsaw Pact, or even ANZUS, has fallen out of fashion. While China and Russia have expressed reservations about a formal military pact, this has not prevented them from participating in high level joint exercises, or exchanges and sales of military equipment and technology. As Muraviev points out, the lack of a formal alliance “does not preclude Moscow and Beijing from joining forces to respond militarily to mutual threats across the Indo-Pacific and beyond”.

Individually China and Russia may or may not prevail in East Asia or Eastern Europe, respectively, against the US or NATO. Operating in tandem they would present a more formidable challenge. There are large and important overlaps in their respective strategic interests, which tends to drive pragmatic strategic cooperation. They are both North East Asia powers. Neither would like to see the other become an adversarial or hostile neighbour as that would seriously weaken their own security, and leave them alone facing America.

As much as Australia’s distance from any real threats is a great strategic plus, its relative isolation can obscure the bigger picture. At present Australia seems unable to look past China’s east coast and its contiguous waters. However, the world looks different standing in Beijing or Moscow, and good strategic policy should encompass trying to understand the perspectives of both allies and potential adversaries.

The relationship between Russia and China is only of real significance to Australia when weighing up its options in the South China Sea. The still optimistic opinion held by Australian policy makers about US leadership and military dominance, positions many commentators see as eroding quickly, if not gone in East Asia, needs to be examined in light of Muraviev’s observation. Once factored into the analysis of the situation in East Asia, the global consequences of a war are magnified and the recklessness of contemplating participating in such a conflict becomes even clearer.