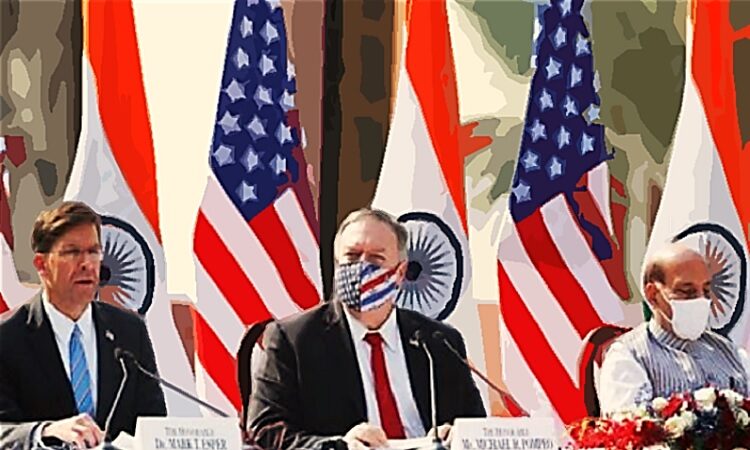 As anticipated, the United States and India have today [27 October 2020] signed an agreement for the sharing of sensitive satellite data during a biannual “2+2” security dialogue in New Delhi.

According to Indian defence sources, the Basic Exchange and Cooperation Agreement (BECA) on Geospatial Cooperation will provide India with access to a range of topographical, nautical and aeronautical data necessary for more accurate use of missiles and armed drones, and will allow the US to provide advanced navigational aids and avionics on US-supplied aircraft.

US arms sales to India

Al Jazeera reports that US companies have sold India more than $21bn of weapons since 2007, and that Washington has been urging the Indian government to sign agreements allowing for sharing of sensitive information and encrypted communications for better use of the high-end military equipment. The US is also reportedly pressing the case for India to buy US F-18 jets and move away from its reliance on Russian weaponry.

India has a long-standing aim to produce its own major arms, but remains largely dependent on imports and has substantial outstanding orders and plans for imports of all types of major arms. India’s top three suppliers over the period 2015-2019 were Russia (56%), Israel (14%) and France (12%).

Russia was the largest supplier to India in 2010–14 and 2015–19, but deliveries fell by 47 per cent and its share of total Indian arms imports went from 72 to 56 per cent. The USA became the second-largest arms supplier to India in 2010–14 as the security relationship between the two countries developed into a strategic partnership. However, in 2015–19 India continued with its policy of supplier diversification, and imports of arms from the USA were 51 per cent lower than in 2010–14. In contrast, arms imports from Israel and France increased, by 175 and 715 per cent, respectively, making them the second- and third-largest suppliers of major arms to India in 2015–19.

Read more about arms imports and exports at SIPRI
https://www.sipri.org/databases